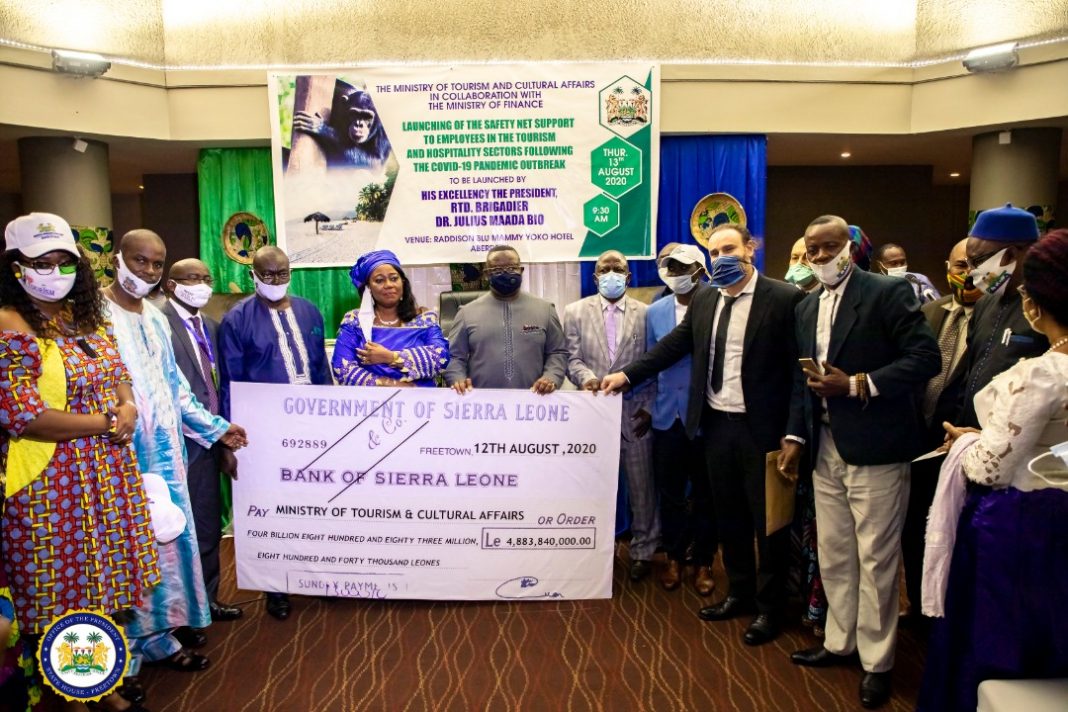 To mitigate the debilitating impact of the  coronavirus pandemic and reduce the economic burden on workers in the tourism and hospitality sectors, His Excellency, President Dr. Julius Maada Bio, through the Ministry of Tourism and Cultural Affairs in collaboration with the Ministry of Finance, has on Thursday 13th August, 2020 dished out Four Billion Eight Hundred and Eighty Three Million Eight Hundred and Forty Thousand Leones (Le4,883,840,000) as Social Safety Net Wage Bill Support to affected employees in the aforementioned sectors. The programme was held at the Radisson Blu Mammy Yoko Hotel, West End of  Freetown.

Speaking during the programme, President Bio noted that various speakers have bemoaned the loss of revenue, loss of jobs, the virtual standstill in the tourism sector, and all the sundry frustrations and associated fears since COVID struck further highlighting the negative impact that the pandemic has had on the tourism and hospitality sectors with jobs lost and diminishing revenue since COVID-19 struck and continue to persist.

“So I want to start by challenging us all to build upon the optimism that we expressed in the New Direction manifesto that we can make tourism a key growth sector of our economy. We believed then and we believe now that while showcasing the great beauty and heritage of our nation, we could create jobs and get substantial revenue. We argued that we could do so by improving the policy and legal environment;  developing tourism sites and products; developing tourism infrastructure;  improving, promoting, and marketing our country’s unique image as a safe site for great tourism experiences;  developing skills that serve the tourism sector, and diversifying our tourism products. I have since then reiterated that commitment in my State Opening of Parliament address,” the President intimated.

President Bio further revealed that the National Tourism Census conducted by the Ministry and Statistics Sierra Leone has for the first time ever given them access to comprehensive data on the sector and that his Government’s targeted marketing and promotional campaigns through participation in international trade fairs, exhibitions, and expanded digital marketing have all supported the country’s singular aspiration to develop the nation’s great tourism potentials maintaining that Sierra Leone is at peace.

He mentioned some of the Government’s successes over the last one year, disclosing how they received a group of 300 Danish tourists; that the cross-border Budapest-Bamako Rally with over 700 participants terminated here; and a significant number of African-Americans, Gullahs, traced their ancestral roots to Sierra Leone.

“Tourist arrivals surged up by 40% to 107,000 arrivals and tourists spent an estimated US$63 million in the Sierra Leone economy. Bed capacity and occupancy increased with new tourism facilities and the Lumley beach stretch has been developed by locals, creating thousands of jobs for Sierra Leoneans,” he also mentioned.

President Bio said as he indicated elsewhere, part of the logic that informed the social safety arm of the country’s QAERP programme was that they wanted to design financially sustainable, fit-for-purpose social safety nets that would protect the most vulnerable/most affected in  communities, and cushion the impact of COVID-19.

He continued how he was informed that the Ministry has collaborated with the National Tourist Board and the Hotel and Tourism Association to collect and collate data on tourist establishments and workers in that sector – from hotels, beach bars, casinos, nightclubs etc.

The President said based on the data collected, he is therefore pleased to announce that his Government has allocated Four billion, Eight Hundred and Eighty-Three million, Eight hundred and Forty thousand Leones (Le4,883,840,000.00) to the tourism and hospitality sectors as Social Safety Net Wage Bill support.

He said this is a three-month wage compensation package that will serve a total of 2,363 workers and that the amount is meant to mitigate the impact of the pandemic and reduce the economic burden on workers.

In her contribution, the Minister of Tourism, Dr. Memunatu Pratt lauded the significant step taken by President Bio to support people in the tourism sector with a social safety net programme to get through these extremely tough times.

She disclosed that the disbursement of the aforementioned funds will cater for employees nationwide working within the categories of hotels, guest houses, night clubs, restaurants, bars, travel agencies, local tour operating companies, sea transportation and tour guiding and they will benefit from a three months minimum wage salary support.

The Tourism Minister added that they are also continuing with the necessary planning and modalities to ensure that the tourism industry could recover as quickly as possible and continue to be a major contributor in revenue generation and job creation.