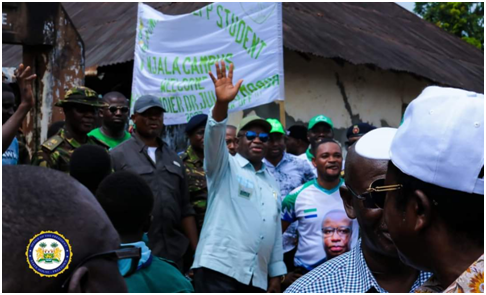 President Julius Maada Bio is on a four-day working visit to the Southern Province, starting in a town hall with leaders, women and young people in Taninahun and commissioned a project in Serabu, known for its Catholic Community Hospital and the nursing school since 1978.

President Bio told the jubilant crowd that he was happy to be with them in Taninahun and thanked them for voting for him in the 2018 elections and encouraged them to take advantage of the opportunity presented by the free quality education and send their children to school.

Honourable Foday Rado Yokie, who spoke on behalf of stakeholders of the town, expressed gratitude to the President and his entourage for the visit, stating that that was the first time they had had a sitting President visiting the area.

He said he was happy to have hosted the President, the First Lady and their entourage, noting that his people were very grateful for the many development projects by the Government.

First Lady Fatima Bio, thanked the people for the warm reception, noting that she was most grateful to them for appreciating the President.

In Serabu where the President commissioned the Emmanuel Pious Richards Foundation Hall and Library, he encouraged school-going pupils to make use of the library and become more knowledgeable.

He ended by presenting some medical equipment from the Ministry of Health and Sanitation to the people of Serabu and admonishing them to handle them with care.

In Bumpeh the people thanked President Bio for the visit and the free quality education and pledged their continued support to him and his Government while assuring that they would vote for him in the coming 2023 elections.