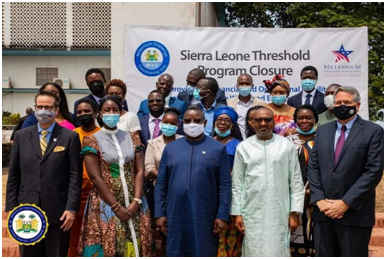 Sierra Leone has on the 3rd November, 2022 passed 11 out of the 20 indicators on the Millennium Challenge Corporation (MCC) the scorecard for 2023, making it the country’s fourth consecutive pass since the Government of Sierra Leone’s President Dr Julius Maada Bio in 2018.

The compacts are five-year agreements through which the United States Government provides grants to partner countries, Sierra Leone, which is now in good stead to continue the development of the multiple hundreds of million dollars power Compact to support programmes to reduce poverty through economic growth.

Sierra Leone’s proposed Compact, which has currently reached the feasibility stage, intends to increase the availability of reliable and affordable power for households, businesses and social institutions across Sierra Leone.

The Sierra Leone Compact Development Unit (SLCDU) in a statement, noted that the FY 2023 MCC scorecard presents a fresh mandate for the Government of Sierra Leone to deepen reforms in key sectors as it continues to develop the Compact.

“With one of the most ambitious timelines within the MCC portfolio, Sierra Leone is poised to sign the Compact in 2023. The Compact will alleviate the energy constraint for all Sierra Leoneans through this valuable partnership with the United States of America,” it said.

“At over 99.5% in 2021, Sierra Leone has the highest rate of girls completing primary education than any other West African country for the period in review. On Primary Education Expenditures, Sierra Leone increased spending from 3.61% to 4.3% as a percentage of GDP between 2020 and 2021- the highest increase over a one-year period across all the countries in the lower income pool on the MCC scorecard,” the statement stated.

The Unit further disclosed that for the first time Sierra Leone passed the Land Rights and Access indicator and in the category of ruling justly, the country passed 5 out of the 6 indicators, including the Control of Corruption.

The scorecard also introduced a new indicator and methodological refinements to old indicators, which were approved by the MCC Board in September 2022, with the new Employment Opportunity indicator replacing the Business Start-Up, which Sierra Leone had passed commandingly in previous years.

According to the SLCDU, while Sierra Leone did not pass the new Employment Opportunity indicator, efforts were underway to revise and streamline the labour laws to improve the protection of workers and boost inclusivity in the workplace, adding that Parliament had enacted the Anti-Human Trafficking and Migrant Smuggling Act, 2022, thereby increasing the penalties for trafficking and other forms of forced labour.

It noted that the Government also anticipated the passing into law of the Gender Empowerment Bill that would support the creation of a safer work environment, especially for women.

“The welcome change on the scorecard allows MCC to enhance dialogue with Governments to spur inclusive economic growth through an ecosystem of policies and reforms that foster democracy, increase economic freedom, and promote investments in citizens. These are principles that the Government of Sierra Leone remains committed to in its efforts to improve the lives of its citizens,” the Unit said. 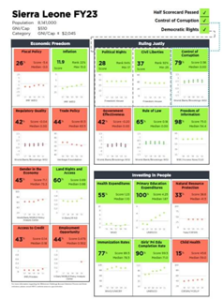