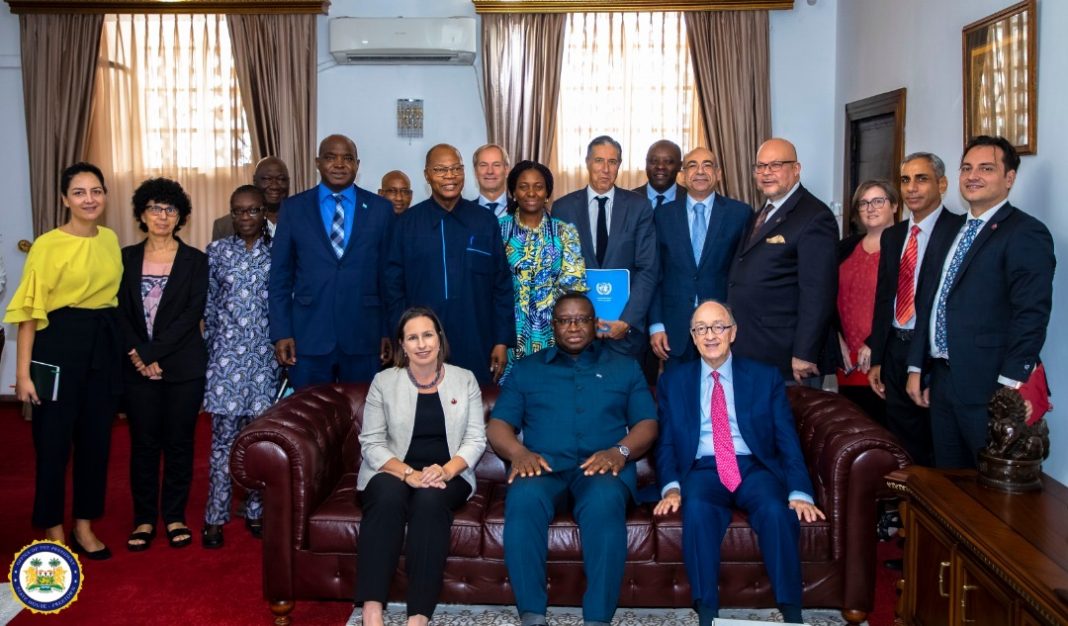 In a meeting at State House, the PBC chairman thanked the Government of Sierra Leone for the warm welcome to him and his delegation since they arrived in the country. He also commended Sierra Leone for its longstanding cooperation with the PBC, saying that they were privileged to have had an excellent collaboration with Sierra Leone’s Permanent Mission in New York.

He said they were pleased to start the Mano River Union visit in Sierra Leone, adding that the objective of their visit was to assess the international support to the peace building priorities of Sierra Leone and its opportunities for an enhanced cooperation in support for the cross-border regional issues, relevant peace building efforts and dealing with peace-related challenges in the Mano River region.

“We have had many productive meetings with government officials, civil society groups and the UN team that have allowed us to access and recognize Sierra Leone’s achievements. The objective of our visit has been accomplished now and this will be a historical visit. I know that President Bio has a clear idea regarding the regional approach, which is very important for us in the next phase that we are starting with Sierra Leone.

“We commend the government for advances made in the three UN Pillars – peace and security, human rights and development; those three elements for the PBC are crucial for sustenance of the democratic process anywhere. We know how important democracy has been for you as Father of Democracy in this country. For us it is really an honour to measure those achievements,” he said.

On his part, President Bio welcomed the team to Sierra Leone, saying that their visit was a sign of commitment by the United Nations to further sustain peace and security not only in Sierra Leone but also in the sub-region. He also expressed appreciation to the wider membership of the United Nations family and the development partners for their continued support to the consolidation of peace as well as their support to the country’s development aspirations.

President Bio also said that Sierra Leone had continued to celebrate milestones in the consolidation of peace, security through the successful conduct of elections, indicating the country’s readiness to move into a more development phase of peacebuilding, as well as demonstrating its democratic progression.

“We are committed to further sustaining the hard won peace and security in this country. Our aspiration is development and the ecosystem that supports that is peace and security, not only in Sierra Leone but also in the sub-region. Sierra Leone is ready to exit the formal agenda of the PBC. However, we will continue to engage the PBC as and when the need arises,” he said.

The PBC was jointly established by the General Assembly and the Security Council of the United Nations in 2005 as a new intergovernmental advisory body that supports peace efforts in countries emerging from conflicts. Its aim is to propose integrated strategies for post-conflict peacebuilding and recovery, bringing together all relevant actors and mobilize resources.