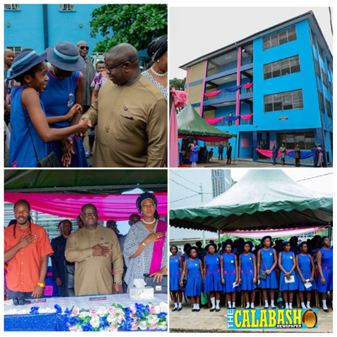 During a very auspicious and inspiring event held on the 2nd September 2022, President Bio unveiled a new building at the St Joseph Secondary School in Freetown named after a former Principal of the school, Florence Dillsworth. The new building is an additional structure to help return the school to a one-shift.

“When I made education a centerpiece of my Presidential campaign, cynics laughed at the seeming simplicity of my thought process. They did not believe that human capital development would appeal to Sierra Leonean voters…

“I choose education because I believe in the transformative power of education for personal development, community development, and for national development. I am pleased that over the last four years, citizens of this great nation have shared this vision and this dream with me, and you are all making our common aspiration to make Sierra Leone a global leader in education a reality once again,” he said.

The President also shared what he said was a bird’s eye view of how well-regarded his Government’s efforts and successes were across the world.

“In July of 2021, I was one of only two Heads of State invited to the London Summit of the Global Partnership for Education (GPE) by the then Executive Director, Alice Albright, and the GPE senior leadership.

“Right here in Freetown, in May 2022, my Government hosted over 13 Ministers from across Africa and championed the development of the Freetown Manifesto for Gender-Transformative Leadership in and through Education.

“In May of this year, UK Minister for Africa, Vicky Ford, visited Sierra Leone and we discussed our shared commitments to girls’ education. Through the Foreign and Commonwealth Development Office (FCDO)’s Leh Wi Lan project, we are collaboratively working on providing essential learning materials for every pupil and even more.

“In recognition of our work in education over the last four years, I am currently the Co-Chair (along with the UNESCO Director-General) of the UNESCO High-Level Steering Committee for Sustainable Development Goals 4,” he said.

Explaining the purpose of the gathering a senior ex-pupil of the school, Professor Miriam Conteh-Morgan, said in October 2020 they laid the foundation for the construction of the beautiful edifice, noting that notwithstanding the challenges of accessing funds, there were high hopes for the project to be completed.

She said the initiative for the construction of the building was to synchronize the two shifts system to one quality education shift system.

Proprietor of the school, His Grace the Archbishop Edward Tamba Charles, said they were grateful to His Excellency the President and the First Lady for making time out of their busy schedules to open the building, adding that it showed commitment to education.

He also commended the ex-pupils of various chapters for their commitment to ensuring that their collective dream was realized.

Minister of Basic and Senior Secondary Education, Dr David Moinina Sengeh, said because of President Bio’s vision for quality education in the country there had been an addition of over 1 million pupils that had been enrolled in various schools under the Free Quality Education initiative.

First Lady Madam Fatima Bio, who is an alumnus of the school, described the occasion as one that needed to be celebrated, noting that President Bio’s focus on education was not political but intentional because he believed that that was the only way to sustainable development.

She further thanked the President for his numerous supports to education policies, adding that that was why she brought her own support for girls through the “Hands Of Our Girls” project, which also covered the provision of sanitary pads for girls.

She ended by donating 300 chairs and tables to the school while encouraging them to do more and assured the girls of another distribution of sanitary pads by the end of September 2022.