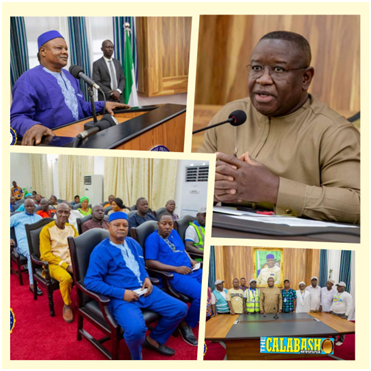 President Julius Maada Bio met with members of the Motor Drivers and General Transport Owners, Boat Owners and Operators, Commercial Bike Riders and Kekeh Riders’ Union, on the 2nd September,2022 as part of his ongoing nationwide engagements with critical groups on peace and national cohesion.

While thanking the transport sector players for responding to his call, the President said: “As a Government, we consider this meeting very important because the role you are performing in our nation is so important, such that a lot of things will only happen in a society with your intervention”.

He said the development and growth of the country were to a large extent dependent on how well or badly they worked toward moving around with lives and property from one point to another.

“Because of the role you are playing in the different modes of transportation, there is hardly anything about national discussions the State can embark on without engaging them. Today’s engagement is to honestly sit and analyze the issues, trying to understand exactly what happened during the 10 August insurrection that has changed our development strides, presenting a bad image of our country on the international stage.

“Interestingly, most parts of the country were peaceful. Several Sierra Leoneans were surprised by the violence on that day but went about their normal business. Despite the insurrection, as a Government, what we noticed was that most of you did not join, and so did the greater population. What they achieved on that day was the killing of police personnel, the death of civilians, and the loss of property,” he said.

President Bio said even after their violence, global prices of basic commodities did not go down because there is still a global crisis, adding that Sierra Leone is not an exception because it would always remain a part of the global village and the Government could not shy away from that.

“What I am happy about is that, even though your activities were disrupted on that day, as soon as calm returned, you were able to come out and continue moving people around. When the country’s economy is moving, you are the sector moving it. When goods arrive in the country through the seaport, you move them to their destinations. The transport sector is very important, and I am happy that you have decided to keep your peace and abide by the rules and laws of the country.

“I am calling on all of you to help in the fight against tribal bigotry. No matter where you are in the country, let’s fight this war against bad politicians because we are one people in a country called Sierra Leone. I have only one message for you and that is to send your children to school because they are the future of this nation. My doors are open to a free, frank, and national discussion that is in the interest of peace and national cohesion,” President Bio concluded.

President of the Motor Drivers and General Transport Owners Union, Alpha Bah, said: “What happened on August 10 was influenced by bad politicians that used our youth negatively on that day but rest assured that the entire membership of the Union will vote for you come 2023. We will never cry down your Government because fuel is available in all fueling stations across the country with no fuel shortage”.