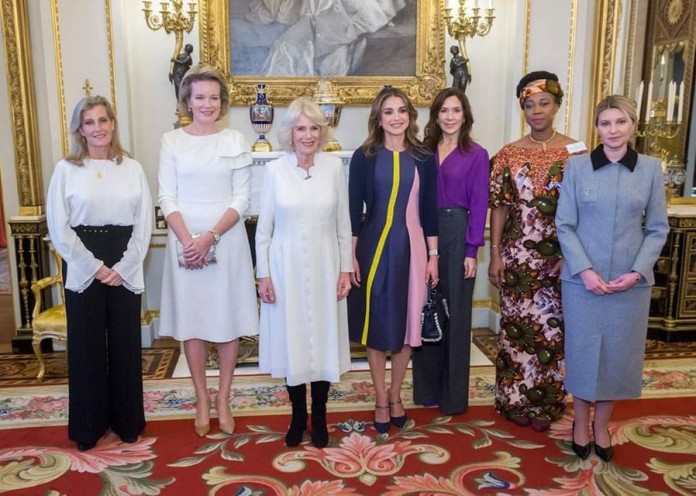 First Lady of the Republic of Sierra Leone, Fatima Maada Bio, was on the 29th November, 2022 hosted by Her Majesty the Queen Consort, at a Buckingham Palace reception comprising a powerful galaxy of distinguished women from around the world, including HM Queen Mathilde of The Belgians, HM Queen Rania Al Abdullah of Jordan, HRH the Crown Princess Mary of Denmark, and HRH the Grand Duchess Maria Teresa of Luxembourg.

Also in attendance were selected Secretaries of State, and Government Ministers as well as the Commonwealth Secretary-General the Rt. Honorable Baroness Patricia Scotland.

The event, which took place in an exclusive sector of the palace was organized to mark the United Nations Day for the fight to end violence against women- The “UNITE” campaign- which calls for global action to increase awareness and promote advocacy, “aims to prevent and eliminate violence against women and girls around the world”.

For over a decade, HM the Queen Consort has been working to highlight issues around this theme and to assist organizations working to support victims of Rape and Sexual Abuse.

In pursuit of that laudable effort, HM the Queen Consort has visited Rape and Sexual Abuse Support Centres in many countries including the USA, India, and the Balkans, and met with survivors to learn more about their issues.

It is no surprise that Madam Fatima Maada Bio was invited to this prestigious and exclusive Buckingham Palace reception.

Her advocacy for women and young girls has propelled Sierra Leone’s First Lady to a platform that has allowed her to capture the admiration and support of many important people around the world.

Dr. Fatima Maada Bio and Mrs. Olena Zelenska, of Ukraine, were the only First Ladies invited to attend the Buckingham Palace reception which included royalties from established monarchies and senior officers of His Majesty’s Government. As the First official solo engagement by HM the Queen Consort, following the accession of King Charles III to the throne, this was a particularly special occasion.

It could be recalled that early this month, Dr. Fatima Bio, through her work and advocacy, successfully convinced the United Nations General Assembly to adopt November 18 as “The World Day for the Prevention of and Healing from Child Sexual Exploitation, Abuse and Violence”

Mrs. Bio has become a global icon who is using her influence and her vast network to bring attention to the plight of a marginalized but critical sector of the human demography- women and young girls. Her efforts in helping women is being recognized and appreciated around the world!