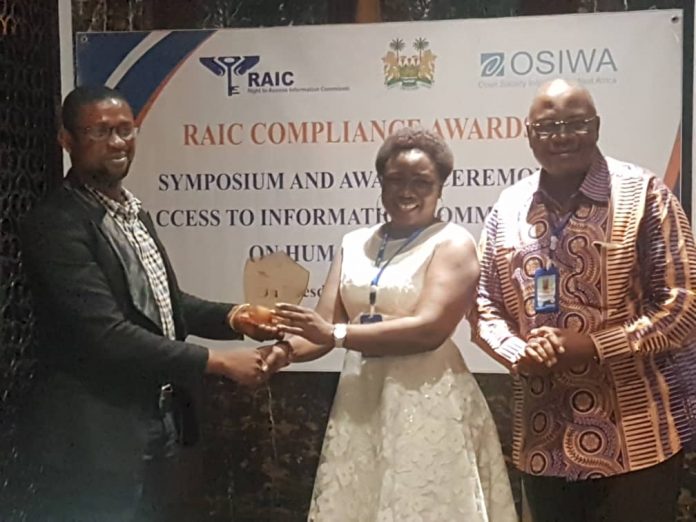 One of the most important State institutions that is contributing positively towards churning out reliable data to be used for various purposes, Statistics Sierra Leone has bagged the top proactive disclosure of information compliance award (Gold) for being the only MDA to proactively disclose all information as stipulated in the Right to Access Information Act of 2013 and also to have fulfilled all 22 disclosure benchmarks well in time.

The award which was held at the Atlantic Lumley hotel on Tuesday 10th December 2019, and organized by the Right to Access Information Commission(RAIC), attracted representatives from the media, civil society, m
Ministries , Departments and Agencies and other national and international partners.

Speaking at the symposium and awards ceremony on the commemoration of the 71st  Anniversary of Human Rights Day, the Right to Access Information Commissioner, Dr  Ibrahim Seaga-Shaw said that the award ceremony was meant to recognize institutions who had gone  a long way in meeting key requirements in the proactive disclosure  of information indicators for which awards were given in the gold, silver and bronze categories whilst some certificates were presented to institutions who had being working hard to comply. He cited the public disclosure award as the highest award amongst the lot of awards to be handed out.

He furthered that, of all the institutions, only Stats SL was able to fulfill all the 22 classes of information in the proactive publication scheme. In that vein, the proactive disclosure compliance award (GOLD) therefore went to Stats SL for being the public authority that did not only meet the first deadline of 1st march 2019 but also fulfilled all minimum classes of information that should be proactively disclosed as stipulated under the RAI act of 2013, with Environment Protection Agency picking up the silver award and the bronze award going to the National Youth Commission

The Statistician-General, Prof Osman Sankoh in his remarks, thanked his indefatigable Stats SL Team and especially senior data scientist, Clementina Akran and other officers in the Data Science division, who he said had toiled to ensure that they proactively disclose all information that was requested

Other awardees at the event included the Sierra Leone Police who won an award for Access to Information, Ministry of Information and Communication and the Government Printing Department amongst others. 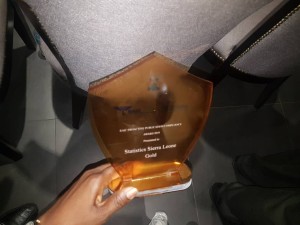