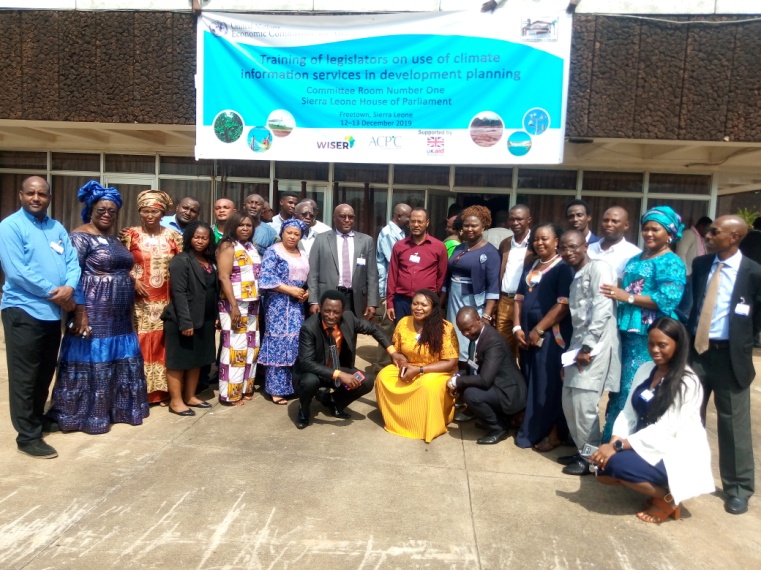 Parliamentarians have taken the lead in addressing Climate Change challenges in their country. This decision was made at a training workshop held on 12th and 13th December 2019 at Parliamentary Committee Room Number One where important topics surrounding climate information services where discussed.

The workshop is developed to build the capacities of Sierra Leone Policy Makers on key decision making a portfolio in the legislature, and all sectors of governance within Regional Economic Communities and other regional bodies. It is designed to strengthen the skills of decision-makers in understanding the importance of Climate Information Services.

The workshop is hosted for Members of Parliament as a partnership between the Parliament of Sierra Leone and the United Nations Economic Commission for Africa (UNECA). It is aimed at establishing a long-lasting relationship between UNECA and the Sierra Leone Parliament in order to foster collaboration between the two institutions. The Workshop is designed to build the capacity of Members of Parliament in the use of Climate Information for planning and decision making; and it focused on engaging with MPs on the overview on Climate Services in Africa, with particular reference to the Strategic Development Goals (SDGs), especially SDG 11 and 13 and the Paris Agreement.

Delivering the welcome addressing, Sierra Leone’s Clerk of Parliament Hon. Umar Paran Trawelly described issuers of capacity building as core in parliament especially in areas like Climate Change. The workshop, he said is timely because climate change is deeply affecting Sierra Leone. As legislators, the Clerk pointed out that they need the required skills and information to get quality legislation on climate change.

UNECA’s Representative, Frank Rutabingwa described climate change issues as very important in the economic development of African countries. “We can address the impact of global warming and keep it at bay. Sectors like energy and water are all affected by climate change,” he said and added that lots of lives have been lost in Africa as a result of climate change and it has cost the conti9nent billions of dollars.

Rutabingwa warned the climate change impact will increase should action not taken to address it.

In his statement, the Acting Leader of Government Business, Hon. Dixon Rogers underscored the importance of climate change inform, action in planning for a nation’s development and added that they will do their best as lawmakers to get the best information to addressing climate change challenges in Sierra Leone. “We cannot go on with development if we do not address climate change issues as a country,” he said and cited an example to the current hot temperature in the harmattan. “We are calling on the organizers to empower Members of Parliament to take the message to our constituents,” he said.

This was supported by the Acting Leader of Opposition, Hon. Ibrahim Ben Kargbo who called for MPs to be capacitated to enable them to take the lead in addressing climate change challenges. Hon. Kargbo narrated the effect of climate in the country relating to the August 14, 2017 mudslide disaster, noting further that climate change strongly affected the poor and added it needed to be addressed for the development of the African continent.

The former Member of Parliament, Hon. Rosaline Jariatu Smith who championed the workshop called for the need to improve understanding and get timely information, climate predictions and use climate information to serve societies better particularly in the face of climate change

“Understanding climate information will have an effect on long term planning in the sense that effective climate service will facilitate climate-smart decision that will reduce the impact of climate-related disaster, improve food security, health outcome and enhance water resource management,” she said and added that an understanding of climate information is essential in making informed and appropriate plans to deal with climate-related impacts through adaptation, risk reduction, and development actions, particularly as the future looks increasing uncertain.

The workshop succeeded in putting into context the physical structure of Climate Information and Services and provided a comprehensive analysis of what needs to be done within the African continent, by mainstreaming Climate Information into legislations, plans and policies.