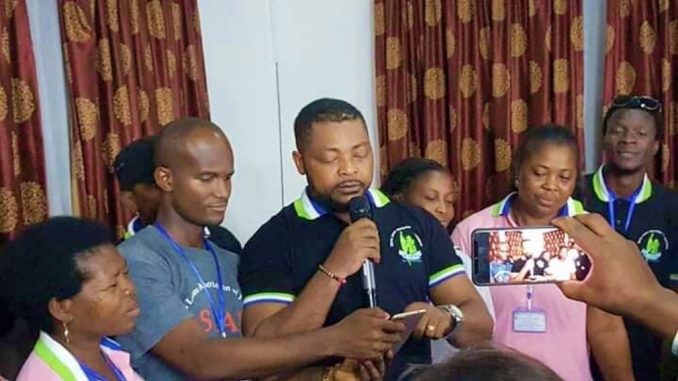 Journalists across the country are appealing to Members of Parliament to expediate the process leading to the repeal of  Part V of the Criminal Libel Law which was enacted by the same Parliament in 1965 during the political tenure of Sir Albert Margai, the second Prime Minister of Sierra Leone. At that material point in time the Act was promulgated to silence dissenting and critical voices against the excesses of the then Government. Since then, it has been used 99.9% percent by politicians against journalists.

With support from the British High Commission and the Irish Embassy, in 2016 SLAJ and the Ministry of Information and Communications held a National Symposium on the repeal of the said law, which brought together all stakeholders including politicians, MPs, the SLP, the Human Rights Commission -Sierra Leone, the BAR Association, Law Officers Department, CSOs etc. During that engagement, all these keys stakeholders agreed that the Criminal Law is a bad law and must be repealed. For far too long journalists have suffered under the hands of politicians as the Criminal Law is the only Law in Sierra Leone which presumes one guilty until one is proven innocent by a Court of Law and more repugnantly with this law “Truth is not a Strong Defence or No Defence at all”.

On Thursday 12th December, 2019 during the Ministry of Information and Communications weekly press briefing at Youyi Building in Freetown the Minister of Information and Communications, Mohamed Rahman Swaray, reaffirmed Government’s commitment to repeal the Criminal Libel Law. He assured the media that as a Government they are committed and the President is on track as they are working assiduously to make it happen.

It was against such a backdrop that the Bill was tabled on Tuesday 17th December, 2019 in the Well of Parliament where many media practitioners were in attendance to support the drive in the repeal process. Lamentably, after the Bill was tabled in Parliament for over one month now much has not been heard from Parliament thereby giving the impression that the issue of the repealing process has been hidden under the carpet.

During a privileged discussion with some Parliamentarians most of them disclosed that they are still concerned that if the criminal libel Law is repealed journalists will have a field day to practice negative journalism wherein they can just wake up one morning and write negative things about people in order to destroy their characters.

In that regard I want to lay the fear of Parliamentarians and members of the general public to rest by assuring them that even after the repeal of the criminal libel law journalists will practice responsible journalism and for those who may not want to practice responsible journalism we have safeguards or checking barriers like the Independent Media Commission with powers to enforce its provisions in the Code of Practice, the Civil Defamation Law among others.

With this law an offending journalist is required to pay a fine/compensation if found guilty and there is finally Self-Regulation by SLAJ: Enforcement of the SLAJ Code of Ethics and strengthening of the SLAJ Disciplinary Committee.

The criminal Libel Law has been the major reason why the media in Sierra Leone is poor because business people and institutions are afraid to invest in the media and it also scare women away from coming into the media profession.

As this Law has in the past affected journalists and printers alike  as was evident in the Atlantic Printers and the New Breed Newspaper Vs NPRC Government in the mid-1990s and John Love Printers and Paul Kamara of Di People Newspaper Vs the late Justice Tolla Thompson and later Vs ate President Ahmed Tejan Kabba in the early 2000s. Both printing companies were shut down after the journalists were jailed.

Journalist are therefore unanimously calling for the repeal of the criminal libel law in our law books as it is against the spirit of Freedom of Expression and of the Press as provided for in Section 25 of the 1991 Constitution of Sierra Leone.

It also contravenes international human rights treaties to which Sierra Leone is a signatory, including Article 19 of the Universal Declaration of Human Rights and Article 19(3) of the International Convention on Civil and Political Rights (ICCPR), all of which condemn limitations to the right to free expression.

Many believe with the repeal of the Criminal Libel Law such would open up the space for business people and institutions to invest in the media landscape in the country which will boost the growth of the media industry in the country and enhance responsible journalism.