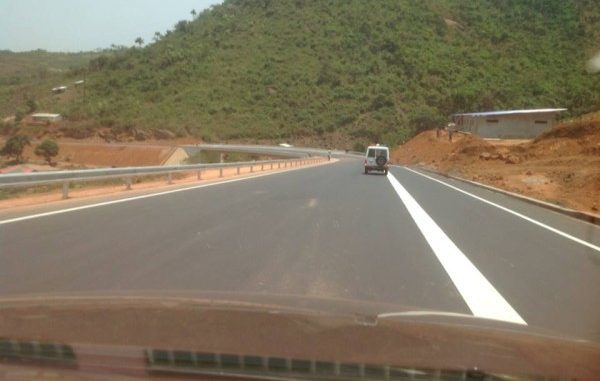 In an ongoing deliberations between the Regent Village Community, Ministry of Lands (MLCPE) and Environmental Protection Agency (EPA) to help protect the sidewalks of the Regent – Grafton Road from stopping people to build sharks and shops.

In a meeting held last weekend in the village, members of the community reiterated the call that the village area community executive continue to prevail on both Ministry of Lands and EPA not to give any permit on the sidewalks to people to conduct any structures.

The Head Woman of the Village Mrs Elenora Metzger said they have been engaging both institutions for years now not to allow any kind of structure on that road as the village is planning to keep the road safe with the planting of trees.

She said they have engaged  both institutions and before the change of government, the Strategy and Policy Unit of State House was in support of the Village plans and there were several meetings held with MLCPE, EPA and the village to make sure that nobody will construct any kind of structure along the road.

Member of the village committee, Joshua Nicol said they have visited the ministry several times to stop the construction of a fuel station close to the village cemetery as the land is unsuitable for such structure.

“This is the reason why we don’t want any construction on the sidewalks because the piles of dirt along the road were done by CRSG to get rid of the dirt as nobody did that. During the rains most of these dirt continue to wash away and that is the reason why we want to plant trees to protect erosion.

Head Woman said during the opening of the road former President Koroma made it very clear that nobody should build any structure of any kind along that road because the flora and fauna of the forest must be protected as well as to stop erosion along the road.

“We believe that we must protect the sidewalks and nobody should destroy the road for us with building of structures. We are appealing to both Ministry of Lands and EPA not to award any license of any kind to anybody to destroy the road.  Many people are just waiting for the first person to start then they too will continue. It is for that reason we will not allow the petrol station to be built in such a dangerous place.”

Mrs Metzger appeal to all those who have such idea to take it elsewhere as the village will not allow anybody to come and destroy the road or the sidewalks.

“During the meetings we have been having with the Strategy Policy Unit of State House, EPA and Ministry of Lands were attending and they are all aware of this ban and we are hoping for them to uphold it even though there is a new government, but we believe in continuity and the government will continue to protect the road for us all. As the Chinese saying goes, building of roads leads to prosperity.”

The Head Woman said during the meetings held by all parties concern, there were recommendations made that she said she wants the government to uphold.

Institute robust reforestation by the start of 2018 rainy season;

Conduct joint land trotting and demarcation of the restricted areas

Share with the Headmen of the communities the proposed national park and restricted areas gazette;

Ensure availability of funds for seven months for the joint security personnel presence and finally review the local Government Act.

Elenora Metzger averred that she hopes these recommendations will still be effective and said she is calling on NPAA, EPA, the military, police and Ministry of lands to all come onboard to save the Regent –Grafton Road and its environs.