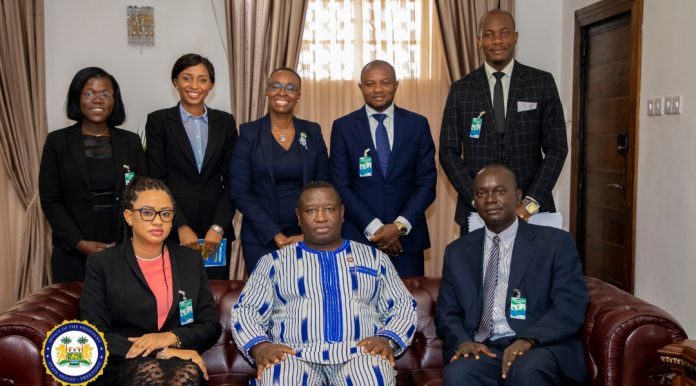 The new Executive of the Sierra Leone Bar Association paid a courtesy call on His Excellency President Dr. Julius Maada Bio at State House in Freetown on Friday 23 August 2019.

President of the Association, Robert Kowa, commended President Bio for his strides to ensure that the State was smoothly run amidst the challenges, noting that they were aware of the challenges. He said they were prepared to give their support and work with the Government, adding that the Bar Association is a professional body and would remain so in the best interest of the country.

He said the new Executive had adopted a collaborative approach and would constructively continue to engage in the governance of the State, while also ensuring that the rule of law prevailed in the country.

He added: “It is our responsibility as lawyers to ensure that the State becomes a lawful State wherein whatever is done is done properly and in that respect we pledge our commitment. It is also our concern that for the Rule of Law  prevail in this country, we have realized the need for a review of the Constitution. Our country has grown past this Constitution and this may be one of the reasons for several constitutional issues over the years.

“We are pleading with your office to speedily expedite the constitutional review process. This process took place during the last administration but after wide consultations and with the report being submitted what came out from the White Paper was not reflective of the views of the people. We are held back by that document and it is creating a lot of problems and we have to look at it properly,” he said.

He mentioned that they were ready to cooperate with the Government and make their inputs and presence felt around the process, adding that that could be one of the landmark achievements President Bio would leave with Sierra Leoneans and it would be the turning point for the country. The President of the Bar Association also used the occasion to solicit the Government’s support in the construction of the proposed Bar Association Secretariat.

In his response, President Julius Maada Bio congratulated the new Executive at the Bar Association, adding that it was an essential element of the country’s democracy that plays an integral part of the governance system. He said he would expect the Association to play its professional role to make the governance system more effective and accountable.

He noted that Sierra Leone had gone through a lot and it was the responsibility of every Sierra Leonean to play their different roles to enrich democracy and the development of the State. He said his Government is not averse to constructive criticisms and engagements because that would enrich Government’s decisions.

“This is a country of laws and those laws must be respected. Today, things are moving much faster and the Constitution, which regulates how we do things, must also be considered for change because quite a lot has changed. We have started the process of thinking about how we can start the process in a collaborative and inclusive way so that every facet of society is involved in shaping that document. I look up to the Bar Association as a partner in this process,” he ended.