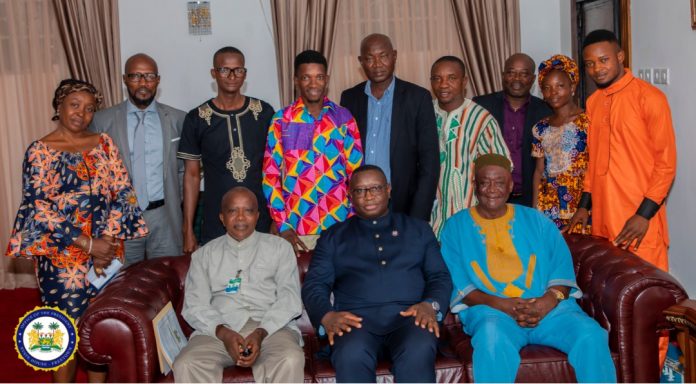 Stakeholders from Bombali district on Thursday 22 August 2019 met with His Excellency President Dr Julius Maada Bio to commend him for his Government’s impressive performance since his election in April last year.

Minister of Information, Mohamed Rahman Swaray, who chaired the meeting, said that the New Direction Government had a bold vision for a united peaceful Sierra Leone where everyone would have equal access to opportunities and justice, irrespective of region, tribe or political interest. He stated that the entire country was resonating with the vision of the President and that the meeting was a testament to that.

Head of the delegation, Ibrahim Jalloh, said their team comprised members from various facets of life in the Bombali district who mirrored the collective aspirations of the people of Bombali, adding that the delegation and visit were the outcomes of extensive engagement and consultation with their people. He emphasised that they were therefore serving as ambassadors for the people in that part of the country.

He mentioned that they were of the belief that engaging with the national leadership in a constructive manner on issues around good governance and national development priorities were not only a civic responsibility but also a solid indicator of growing confidence in the leadership and governance of the State.

“We want to commend your sustained and ferocious fight against corruption. The damaging consequences of corruption cannot be over-amplified and they are consistent across tribe, region and political party. It is a war for which every Sierra Leonean must take primary responsibility. The national collective engagement in fighting corruption spiced with your abounding political will can lead to a resounding victory.

“We also want to applaud your drive and leadership in developing the human resource capital through the provision of Free Quality Education, applaud you for the development strides and overall leadership in the governance of the State and again commend your Government for organising the Bintumani 3 Conference on peace and national cohesion. We must entertain a sense of urgency to dismantle our national dividers and strengthen our national connectors,” he said.

In his brief response, President Julius Maada Bio said he was happy to receive the visiting team because there was need to bring everyone on-board the development process. He added: “Our programmes, especially the Free Quality Education, are centered on national interest. We are offering free quality access to education to shape a brighter future for all Sierra Leonean kids. We are all one people and we should at all times discourage tribal and hate among ourselves. My Government is for everyone and we will continue to take development to every part of the country,” he assured.

While delivering the vote of thanks, Paramount Chief Massayeli Tham III of Gbante Chiefdom in the Bombali district said  they were very much grateful to the President for agreeing to meet them, saying that that was a manifestation of his commitment to leading an inclusive nation. He assured that they would continue to share the vision of the President to their subjects.