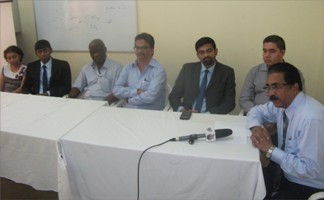 Findings of the Civil Society in Sierra Leone on the recent Choithram Hospital misunderstanding over comments by the Indian Vice President, when he recently paid a visit to this country, are now in the public domain. In a release dated 28th October, the Consortium for Civil Society said it was concerned over the Ministry of Information and Communications position statement contained in a press release on Choithram being a charitable hospital.

Instead, the hospital was doing charitable treatment of persons without economic status to pay the cost of fees for certain ailments and this was done all by itself without either government subvention or international aid from India.

Even the hospital’s name is not found to be CHOITHRAM CHARITY HOSPITAL rather CHOITHRAM HOSPITAL. In conclusion, the Consortium advised the public to discountenance the rumour that has brought misconceptions about the hospital. Another point also found is that Choithram Hospital lacked proper records of their charitable treatments they are giving out. The Consortium also advised the hospital to do publications of all free medical operations and treatments each year.

The Government through the Ministry of Information and Communications was cautioned to verify its records before making claims contained in public policy documents. It would recalled that Choithram Hospital is not being funded by either a Government of Sierra Leone subvention or funds from India and it should find other sources and not depend on proceeds from the hospital to run it alone.