The theme for the congress was ‘Embracing Servant Leadership and Inclusivity Through Financial Co-operatives.’ The conference had over 800 participants drawn from 30 countries worldwide including Sierra Leone’s delegation which was sponsored by Irish League Credit Union Federation Ltd. (ILCUF) in order to expose them to what credit unions are doing in other parts of the world.

In an interview with this medium, the two participants said this year’s theme was more align with the principles of the Cooperative Business Model and Servant leadership as both are people-centered. They underscored that ACCOSCA strongly holds the view that they should practice leadership that actively listens and empathizes with their members’ unique circumstances and positions to be able to meet the objectives of the sector.

They enlightened that ACCOSCA has envisioned a scenario where all are focused primarily on the growth and wellbeing of people and communities to which they belong underscoring that this can only be realized if ACCOSCA allows itself to follow and practice in its fullness the principles of cooperatives and understand their original objectives.

They also articulated that there is deeper penetration and acceptance of the model and they were encouraged because it is heading towards financial inclusion for all.

There were discussions critical for all members on inclusive growth, membership growth, financial capability, regulatory gains and digital financing among others which highlighted if they get these right in addition to embracing the concept and practices of servant leadership, they should be able to make the difference they are seeking affirming that they trust that the discussions would be beneficial to all participants.

The two participants continued that they seek to provide through the congress a platform for credit unions in Africa and all stakeholders to have candid discussions that would culminate into deliberate and innovative strategies towards achieving Financial Inclusion.

The first two days of the congress were allocated to training on the following topics: Liquidity Management, Board and Management, Successor Planning, Effective Communication, Cyber Security Safeguards and Resource Mobilization.

In Kenya and the entire East Africa where Credit Unions are well-established, Mr. Abu Bakarr H. Kargbo said that over 50% of the population are members of Credit Unions with some people joining two or more Credit Unions including medical doctors, police, armed forces, teachers, farmers and drivers etc.

Sources further state that teachers have the largest Credit Unions in Africa, and it is mandatory for all to join Credit Unions in Kenya. Normally, their contributions are deducted from sources.

Back home, the two men have called on the  Ministry of Trade and Industry to review the Cooperative Act in order to amend it to join Credit Unions that would help reduce poverty and unemployment as well as improve the lives of the people.

A two-day training on how Credit Unions attended by Mr. Jaiah Kaikai was useful because he became so vigilant and independent thereafter to effectively perform his responsibilities at home more than ever before especially how to retain employees .

Other topical issues discussed were electronic financing, diversity in leadership, gender, region, bringing the physically-challenged on board, religion and unity in diversity through cooperatives and how to build a succession plan.

Highlights of the congress were experience sharing between different Credit Unions on how they have become successful as well as their challenges, thematic sessions on techniques to develop the capital base of Credit Unions, launch of the first African Cooperative Youth Network to encourage savings at a young age or catch them young as the congress observed that youth participation in financial institutions is low globally, the official flag parade of all participating countries while the congress was officially opened by the Kenyan Minister of Industry and Trade.

ACCOSCA Congress in Kenya is one of the many exposures made by Credit Union leaders, staff and regulators this year. At the beginning of the year three representatives from Sierra Leone (Mrs Mary Bundu NaCCUA treasurer, Mr Issa Bangura Chairperson Tawopaneh and Ms Esther Bangura ILCUF staff) attended and participated in West African block of credit unions in Gambia.

In August, the Acting Registrar of Cooperatives Mr. Newton R A Marlin and Deputy Director Other Financial Services from Bank of Sierra Leone Mrs Esther Johnson participated in ACCOSCA Regulators round table for all Credit union regulators from Africa in Nigeria. At the end of September, the Chairperson of NaCCUA Mrs Lilian Songo participated in International Partners Conference in Ireland.

A credit union is a cooperative financial institution that is formed and democratically directed by people who come together to meet common economic, social, and cultural needs. Credit unions provide both lending and saving services to their members. 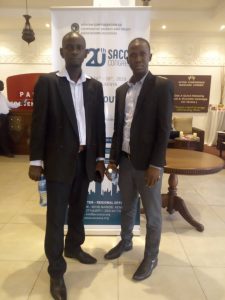