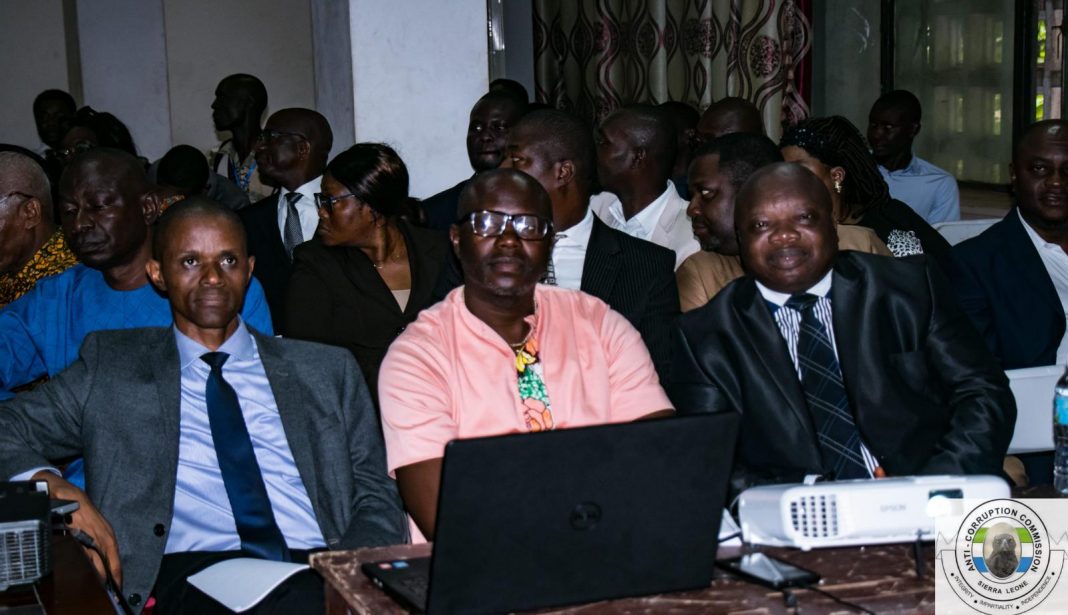 As the ongoing budget hearing gains momentum, the Anti-Corruption Commission (ACC) on Wednesday 9th October 2019 presented its budget for the 2020 Fiscal Year to the Ministry of Finance at the Miatta Conference Centre in Freetown.

Making the opening statement at the presentation of the budget, Augustine Foday Ngobie, Deputy Commissioner of the ACC expressed unreserved satisfaction to the Government of Sierra Leone and development partners for bankrolling the activities of the ACC over the past years, which has led to the outstanding results produced by the Commission. He reminded all that the fight against corruption was a national concern which features in Cluster 4 of the National Development Plan.

ACC’s Director of Finance Sheku Kanu, made the budget presentation on behalf of the Commission, in the presence of officials of the Ministry of Finance, Non-State Actors, District Budget Oversight Committees, Civil Society Activists and the Media.

According to him, the Commission was able to far exceed its major deliverables in the area of public education and outreach activities, strengthening of public sector institutions, recovery of stolen public funds, cases investigated and prosecuted, and conviction secured.
Speaking on the challenges confronting the Commission, Mr Kanu highlighted the lack of office accommodation, inadequate allocation for capital development expenditure, inadequate staff, among others.

He said the Commission was requesting for Eight Billion Leones for recurrent costs for the 2020 fiscal year in a bid to complete its proposed headquarter building at Tower Hill, maintain the courtroom dedicated for the hearing of corruption cases and fully operate its North-West Regional Office which will be formally opened this month.

Jacob T. Senessie, Assistant Director of Budget of the Ministry of Finance, who also served as Chairman of the occasion, praised the ACC team for its brilliant presentation and staunch defense of its budget; and expressed commitment on the part of the Ministry to continue to provide the necessary resources for the Commission to achieve its desired goal of controlling corruption in the country.

Abu Bakar Kamara, Coordinator of Budget Advocacy Network recommended that the Ministry of Finance revisit the policy of giving only 10 percent of funds recovered to the ACC. He suggested that a higher percentage of funds recovered should be allocated to the Commission to further arm them to enlarge the scope of their non-conviction assets recovery.

In his contribution, Thomas Moore Conteh, Executive Director of the Citizens Advocacy Network stated in very unequivocal terms that the resources requested for the ACC were in sharp contrast to the enormous task surrounding the Commission.

He said if the country was to continue to make massive gains in the fight against corruption; the ACC should be given the required support, especially in light of the massive recoveries made by the Commission in the last one year. “Based on the results produced by the ACC over the year, instead of limiting the scope of the Commission, the Ministry should rather make genuine efforts to provide more incentives for its work,” Mr Conteh added.

Similar sentiments were re-echoed by other non-state actors including Moses Mambu of the Civil Society Consortium on Accountability and Service Delivery, Alphonso Manley of the Civil Rights Coalition and Charles Kef-Kobai of Forward Sierra Leone.

Abu Bakar Kamara of Budget Advocacy Network moved a motion that the Eight Billion Leones requested by the ACC for its recurrent costs for 2020 be adopted; a motion that was seconded by Gladys Hastings Spaine of Women’s Forum.