In a twist of event in the Law School saga between the Council of Legal Education and the Chief Justice, Babatunde Edwards, with the former refusing to wave off, as recommended by the Chief Justice, a previous decision not to allow law students who failed to score the required University examination grades in order to  sit to subject references, as against the Chief Justice’s directive that such must transpire, another interesting new development has recently emerged. This relates to the Attorney General and Minister of Justice, Priscilla Schwartz asking the Acting Director of Legal Education, Pamela Davies, to proceed on leave.

This was how the Minister of Justice relayed the message to the Acting Director of the Council of Law School:  “In light of several complaints that have come to my office and in the media about the alleged malpractices around the conduct of the 2019 Bar Final Exams and related processes, it is desirable that a full scale investigation is launched into the activities of the Sierra Leone Law School.

You are hereby requested to proceed on leave with immediate effect.

By copy hereof, Council is hereby informed and is requested to take the necessary action pursuant to Section 6(b) of the Council of Legal Education

Act No.1 of 1989 to appoint a suitable replacement to act as Director.

While acknowledging receipt of the Attorney General and Minister of Justice correspondence, however, Pamela stated defiantly that she will not succumb to such a decision. In other words, she has so far refused not to heed to the directive of proceeding on leave.

In a rather defensive mood this is what Pamela said in her reaction : “ I am in receipt of your letter bearing date 16th October 2019 regarding the above Subject Matter. I note in particular your reference to Section 6[b) of the Council of Legal Education Act, No.l of 1989, which provides that the Council of Legal Education shall “appoint a Board of the Law School, a Director of the Law School and other staff and to inform you that my appointment as Assistant Director of the Sierra Leone Law school in September 2014, was made pursuant to that provision.

It therefore follows especially as there are no contrary provisions in the Act or anywhere else that it is only the Council of Legal Education that has the mandate to issue a directive of this nature. I would also wish to refer you to the provisions of Section 4 of the aforementioned Act which provides that the Honourable Attorney-General & Minister of Justice or his representative shall be one of the ten (10) members of the Council.

I therefore find it difficult to understand that one member of Council could take it upon his or herself to usurp the powers of Council, which is the sole-governing body of the Sierra Leone Law School. Additionally. I also wish to direct your attention to Clause 9 of the Terms and Conditions of Service for Senior Administrative staff of the Sierra Leone Law School which states as follows:

Council shall have power to exercise disciplinary control over all Senior Administrative Staff members on all matters relating to dismissal, termination, suspension, withholding of increments and demotion.’

As the ding dong battle continues to rage the Sierra Leone Bar Association in a letter addressed to the Chief Justice stated that it is very disturbed about the exchange of correspondences between and amongst members of the Council of Legal Education and the naked display of same on social media which is likely to bring the hard earned reputation of the Council into disrepute, public ridicule. It further stated that there is an appropriate forum to address issues of such nature as provided for in Section 5 of the Council of Legal Education Act No, 1 of 1989. It went on to state that the Bar Association views the conduct of some members which undermine the rule of law.

It added that while they await an official report from their representatives on Council, it is the position of the Bar Association that as Chairman of the Council and Chief Justice of the country, he should lead Council members to regulate and conduct themselves as provided by the said Act.

Proffering its recommendations the Bar Association recommended among others that any unilateral action taken by any member of the Council be put on hold until such decision/action is approved by Council.

With the intervention of the Bar School it is yet to be seen how the situation will end up. Although some have attached political arguments in the ongoing stalemate, however, this medium will objectively cover this unfortunate saga. 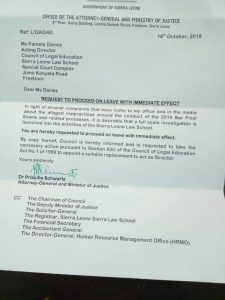 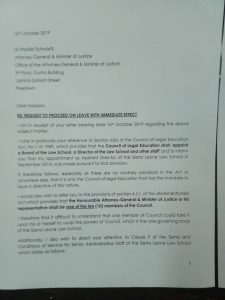 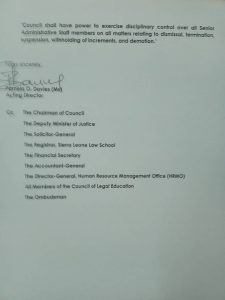