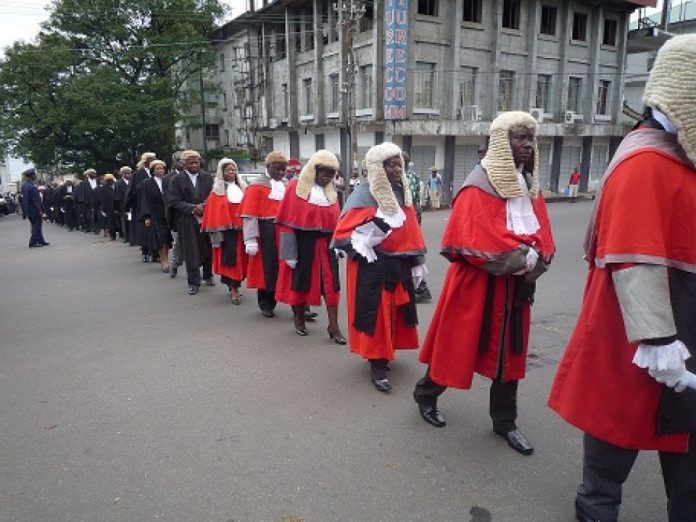 In what appears to be a condemnation of the recent ruling passed down by the High Court of Sierra Leone in the matter involving sixteen (former) Members of Parliament of the opposition All People’s Congress (APC), the Sierra Leone Bar Association (SLBA) has come out strongly to state that the judgment passed down ‘appears to be selective.’

The SLBA in a press release however reiterated the importance for all the parties concerned as well as all Sierra Leoneans to respect the decisions of the High Court of Sierra Leone and quoted Sub-section 1 of section 146 of the Public Elections Act No 4 of 2012 which provides aggrieved persons the right of appeal. The SLBA also urged all aggrieved parties who so desire to only use and exhaust all legal remedies available to them and called on all political parties and their supporters to remain calm, exercise restraint and maintain peace, law and order and refrain from the use of any form of violence.

For its part, the Association raised concerns regarding the orders granted in the said cases and the implications on our budding democracy, the rule of law, good governance, peace, social cohesion and national development.

Elaborating on a number of their concerns, the SLBA press release pointed out that it is important to state the provisions of section 146 of the Public Elections Act No 4 2012:

“146. (l) If the High Court determines that a candidate returned as elected was not duly elected and that the election was void, then the candidate’s seat shall become vacant from the time of the notice of decision of the High Court and if notice of appeal from that decision has been given within fourteen days, the seat shall remain vacant for the period until the determination of the Court of Appeal is given on the appeal or the appeal is abandoned.

(2) Where the question to be decided by the Court of Appeal concerns an election to or the right to remain a Member of Parliament, the Registrar of the Court of Appeal shall certify the decision in writing to the Speaker and the Electoral Commission.

(4) If the election is declared void, another election shall be held.”

Furthermore, the SLBA stated that the provisions of subsections 1, 2 and 3 of section 146 provide:

As if the whole process was stage-managed, the SLBA in its press release dated June 3rd 2019 and signed by Secretary General, Ishmael P. Mamie noted that “the ‘new’ Members of Parliament were sworn in even before the time allowed for appeal was exhausted and without any publication of the required notification in the Gazette.”

It went on state that: “The SLBA further notes that sub-section 4 of section 146 of the Public Elections Act provides that: “If the election is declared void, another election shall be held.”

The SLBA went on to condemn the High Court’s apparent reliance on the precedent in the matter between the Hon. Sam May Lamin Macarthy and Ansu Lansana and Others C.C. 267/12, saying the facts and circumstances of that particular case are materially different from the current cases and therefore clearly distinguishable.

The SLBA noted further that over a year after the elections, not all election petition cases have been heard and that it has been alleged that in both current and previous administrations there has been a failure to assign all politically sensitive cases.

According to the press release, the SLBA also condemns the high handedness of the Sierra Leone Police (SLP) and urged the Sierra Leone Police to always seek to resolve conflict by peaceful and non-violent means as a first option. The SLBA in its press release reminded the SLP of the vital role that they should play in the protection of the right to life, liberty and security of the person, as guaranteed by the Constitution of Sierra Leone, the Universal Declaration of Human Rights and the International Covenant on Civil and Political Rights.

Human Trafficking As an “Emerging” Issue In Sierra Leone