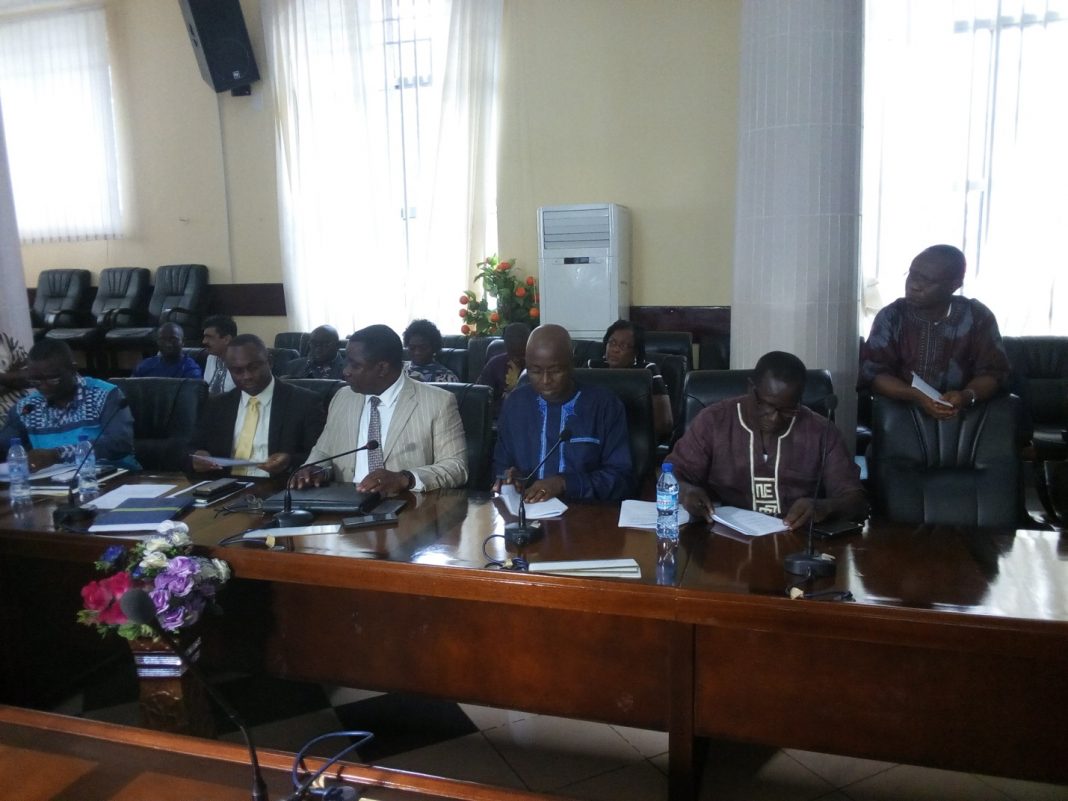 The Ministry of Finance on Friday 12th July 2019 signed the Memorandum of Understanding with universities and teacher training colleges in the country for a computerized payment system for academic, administrative and other staff at an impressive ceremony held at the Ministry’s conference room, George Street in Freetown.

According to the Minister of Finance, Jacob Jusu Saffa, the new payment system would ensure prompt payment of salaries and other allowances for staff of universities and teacher training colleges nationwide as their salaries, transport, medical and leave allowances would be paid directly into their accounts articulating that government wants to effectively manage the payroll, the reason the Ministry of Education was separated into two but lamented that a new Ministry is very difficult to start.

Jacob Jusu Saffa continued to say that universities and teacher training colleges would have to pay other expenses to lecturers and staff asserting that this means no more business as usual adding that signing of the MoU is part of the public expenditure review to sanitize government’s payment control expenditure, that the entire payroll system is being audited and affirmed that the initiative is a signal that more stringent measures would be taken to sanitize the system underscoring that institutions of higher learning are key to government’s human capital development.

The Minister of Finance also revealed that all tertiary institutions are indebted to the National Revenue Authority, that government payroll is over-blotted in all the colleges, especially Njala University, disclosing that the computerized system would soon be rolled out to health workers revealing that the BADEA project and other donors have allocated $68 million to rehabilitate four government schools including the Bo School, Kenema Government Secondary School and the Prince of Wales, two tertiary institutions-Bunumbu Teachers College and the Milton Margai College of Education and Technology in Freetown assuring that government would do more to promote higher education and that the next agenda is to look at the conditions of service of lecturers and other staff.

Dr. Turad Senesie, Deputy Minister of Technical and Higher Education enlightened that the computerized payment system would integrate lecturers and other staff into the national payroll system marking the end of an era when lecturers went without pay for three months and allowances for a year and affirmed that the new scheme would help them to be committed to duty as they would promptly receive their salaries and other allowances.

He further assured that government would deliver on its mandate to provide quality education underscoring that the new payment system would add value to the lives of the beneficiaries disclosing that the beneficiaries would receive alert on their phones that their salaries have been paid into their accounts, reiterated that lecturers would now have time to concentrate on their work and even undertake research work and intimated that government has finally resolved the late payment of salaries and allowances for lecturers.

According to Dr. Turad Senesie, the new payment system is now the global trend.

Head of the Tertiary Education Commission, Professor Aliyagin Algalie revealed that the event is epoch-making and a novelty, that the timely payment of salaries and allowances would end strike actions but reminded heads of universities and teacher training colleges that there is a moratorium on new recruitment and promotions and urged heads to promptly inform the Commission about  replacements.

He also observed the differences in the identity cards and bio- data of some staff members for which an integrated ICT system costing $200 million would be created, disclosed plans for a uniform condition of service for lecturers and other workers aligned to the budget circle and called for tertiary institutions and teacher training colleges to be proactive in responding to the Commission.

The Minister of Technical and Higher Education, Professor Aiah Gbakima said while serving as Vice Chancellor of the University of Sierra Leone from 2005-2019, he experienced the challenges of none-payment of salaries to lecturers and other staff that resulted to strike action and observed that the University of Sierra Leone is not part of the scheme due to late submission of data for which it would not receive its subvention until the information is submitted to the Ministry of Finance.

He also informed his audience that government would pay the salaries of lecturers and other staff of universities and teacher training colleges, Pay as You Earn Tax (PAYE) and cautioned heads of universities and teacher training colleges to notify the Ministry if the need arises as there is a moratorium on new recruitment for which exceptions would be made.

Professor Aiah Gbakima also reminded lecturers to be effective in their work and that punitive action would be taken against defaulters such as withholding of salaries.