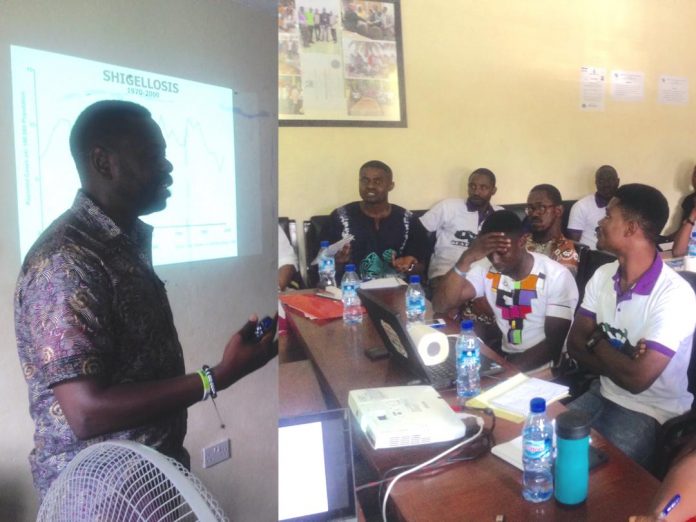 Sierra Leone Association of Ebola Survivors (SLAES) leadership on Thursday 20th June 2019 ended a 3 days training on Paramedics and Leadership at their headquarters at Jui Junction, Freetown through funding from Project 1808 and other partners.

The training was geared towards preparedness for a possible resurgence of the Ebola virus in Sierra Leone as it is now the case in the Democratic Republic of Congo. Training courses included Infections’ Protection Control (IPC), Disease Surveillance, Psychosocial Care, Leadership, Health Advocacy, and Time Management.

On health advocacy and leadership, Brima Abdulai Sheriff trained them on how they as Ebola Survivors can appropriately channel issues affecting them to policy makers and other authorities, and solution centred advocacy.

“Ebola can be crystallized. Scientists do crystallize it but such crystallization at the most part does not cause an outbreak” Dr. Njai’s response to a question of whether Ebola can be man-made during his surveillance and psychosocial care session. He further intimated the Survivors that they are protected against the Zaire Ebola but very unlikely that they could be cross protected against other types of Ebola.

National President of the Sierra Leone Association of Ebola Survivors, Yusuf Kabba, explained that the training is to certify them as Paramedics and build their capacity in order to help in tackling any future resurgence of Ebola. He assured that they as the leaders, upon undergoing such training, will cascade same to the entire 4,000 membership of the association.

“We are really grateful for this training as it has equipped us a lot on health preparedness, health advocacy, surveillance, time management, and psychosocial care. And we will surely put it into practical use” stated by Juliet Spencer who was one of the trainees.

This training is one of many programmes that Project 1808 has partnered with SLAES gearing towards building the capacity of the Survivors to fend for themselves.