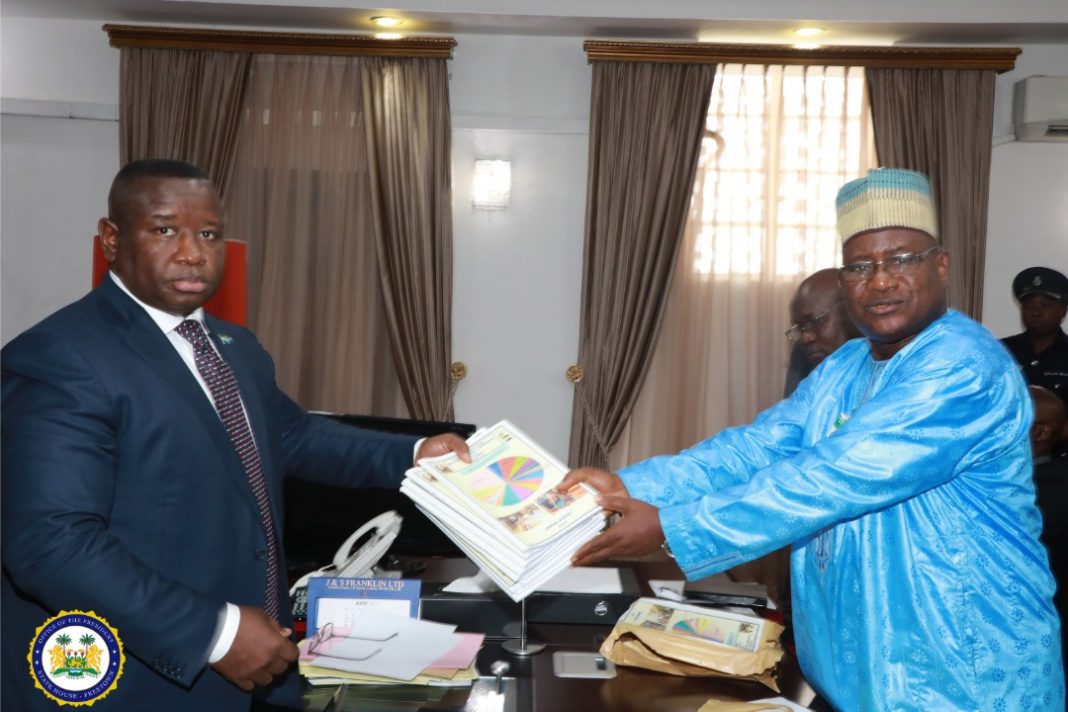 State House -Thursday 20 June 2019 – The National Electoral Commission, (NEC), has presented their Annual Report to President Julius Maada Bio and given update on their ongoing preparations for emerging electoral engagements.

Chief Electoral Commissioner, Nfa Alie Conteh, said that it was mandatory and constitutional for the Commission to present their annual report to the President.

“Your Excellency, Section 32 (12) of the Constitution of Sierra Leone Act No. 6 of 1991 states that the Chief Electoral Commissioner shall submit a report on the programme and work of the Electoral Commission at least once a year to the President and a copy of such report shall be laid before parliament,” he said.

The Chairperson and National Returning Officer for the 2018 elections said that the report included accounts of the Presidential, Parliamentary and Local Council elections throughout the country with 132 constituencies, 446 wards, a Presidential runoff and 9 Paramount Chief Members of Parliament elections.

“Your Excellency Sir, the aforementioned Elections were noteworthy as the first to be conducted since the rebirth of multi-party democracy in 1996 without the supervision of the United Nations Mission under a Security Council mandate,” the Commissioner disclosed, adding that the report also explained his invitation by ECOWAS to lead a fact-finding mission from the 1-15 November 2018 for the Nigerian Presidential and other Elections held in February and March of 2019.

In his response, President Maada Bio thanked the leadership of NEC for holding on to the fort all through these difficult times, adding that democracy in Sierra Leone depends on the progress and work of the Commission.

“I am happy that we now have the intellectual capacity to conduct our elections without any foreign involvement, particularly when it was described by the international community as being free and fair. The job is very difficult and it is not pleasant to do. Thank you for fulfilling your constitutional mandate by compiling this report, despite all the challenges and difficulties attached to the work,” he said.

The President also stated that the country should agree on acceptable rules for the conduct of elections in the country, maintaining that such rules, which would ease the tensions, should be within the confines of the laws of the land.