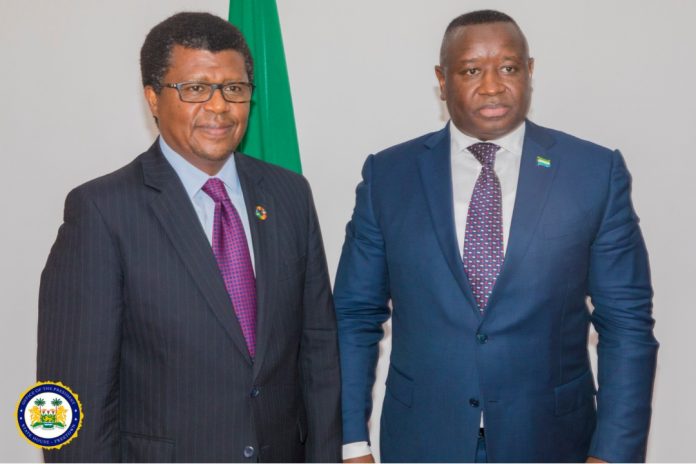 UNFPA is the United Nations sexual and reproductive health agency with the mission to deliver a world where every pregnancy is wanted, every child birth is safe and every young person’s potential is fulfilled.

Minister of Foreign Affairs and International Corporation, Nabeela Tunis, who chaired the meeting, said the UNFPA boss was meeting President Bio to share their organisation’s activities in Sierra Leone, especially at a time when the UN agency is celebrating its 50th Anniversary. She noted that Sierra Leone was among the top countries on their agenda.

Mr. Wordofa said he was delighted to visit the country for the first time. He congratulated President Bio for his great strides in improving the lives of Sierra Leoneans, especially the recent declaration of a national emergency to end gender-based violence in the country. He said the move was welcoming and as an organisation, they would like to see zero gender-based violence across the world.

He also commended the President for his commitment to the free quality education programme for children in Sierra Leone, saying that that was very important for the development of young boys and girls in the country. He lauded the Office of the First Lady for its fight against gender-based violence through the “Hands off Our Girls” campaign and added that they were committed to supporting her.

“We also understand you have launched the National Nursing and Midwifery Strategy, which is critical to improving maternal health and cutting down on the number of teenage pregnancies and maternal deaths in the country. We want to ensure gender equality, end gender-based violence and bring family planning as a human right and making sure that no woman dies during pregnancy or when giving birth,” he said.

On his part, President Bio said his Government had shared concerns on all the issues highlighted by the UN Deputy Executive Director. He said as a new government they were struggling but were committed to serving the people by taking concrete actions. He mentioned that the Government needed some technical support to meet the challenges ahead.

He also stated that he was committed to improving the welfare of women and girls in the country because they constitute the bulk of the country’s population, adding that it was, therefore, important to bring them as part of the country’s development process. He said that teenage pregnancy was responsible for the majority of the maternal mortality in the country.

“Whatever we can do together to move on these areas of cooperation, we are ready to do just that to let you know that we are genuinely committed to serving the best interest of our people. We still lack the technical support to meet the challenges of rape and sexual assaults but we will continue to seek more partnerships,” he assured.

Sierra Leone News: About the ICPD and Why it Matters