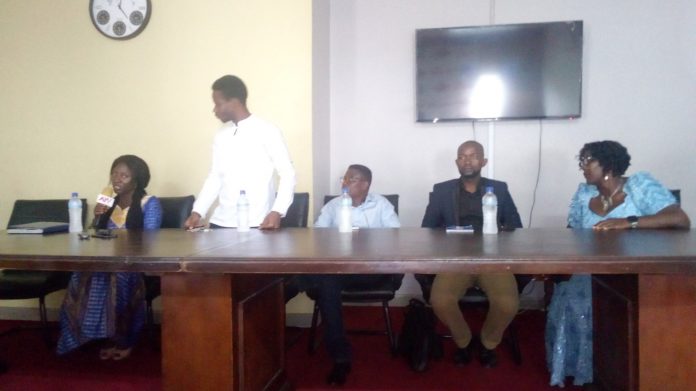 The Africa Young Voices Media Empire (AYV) shall on Sunday August 18th 2019 organise a debate among the four parliamentary candidates aspiring for a re-run election in constituency 110, Peninsular Goodrich scheduled for August 26th 2019.

The disclosure was made at a press conference held on Thursday 18th July 2019, at their office head quarter Wesley street Freetown.

Speaking to a galaxy of journalists, the Director of News and Current Affairs at AYV, Samuel Wise Bangura, said that as an institution they have positioned themselves to be using information and communication for development and to see how they can use it to develop civil space and increase citizens’ participation in the democratic practices of Sierra Leone.

He added that the press conference is geared towards bringing the four parliament tary candidates in constituency 110 for them to give their commitment to participating in the upcoming debate scheduled to take place on 18th August 2019 at the Africa Young Voices Media Empire at Wesley Street in Freetown.

He said the debate will create a platform for proper interface between the people and the aspiring candidates in order for the aspirants to articulate their visions, policies, plans in line with the need of the constituency and the people to have the opportunity to know and understand the policies made by the aspirants as a way of holding them accountable if elected as member of parliament.

He added that the debate will be looking at six thematic areas which are challenges faced by the constituency:

Fishing, Sand Mining, Education, Women and Youth Empowerment, Health and Sanitation and many other things are the critical challenges faced by the constituency, adding that the aspirants will make their commitment in addressing these challenges.

He said that as an institution they are very committed to the political and democratic aspects of the country, adding that they will give their support in terms of resources, strategies to ensure that there is a formidable debate.

He said that this cannot be done by the Africa Young Voices Media Empire alone but that it is a joint effort by all media houses across the country.

Femi Claudius-Cole, 2018 presidential aspirant for the re-election in constituency 110 of the Unity Party said they as a party are committed towards the debate and that as an aspirant she is ready to participate in the debate in order for her to articulate her visions, policies, and plans in line with the need of the constituency, adding that people should stop voting by party sentiment but rather by individual’s commitment.

Khadijatu Davies aspirant for the re-election in constituency 110 of the All People’s Congress party disclosed that she will have to discuss with her party concerning her commitment towards the debate and whatever decision taken by the party she will update the organizes.

Sahr Sam Ansumana who represented the Sierra Leone People’s Party (SLPP) aspirant, who according to him was avoidably absent, stated that his candidate is committed towards the debate. He also noted that the aspirant is presently working towards the development of the constituency.

Desmond Stanley Cole Acting National Publicity Secretary NGC Party who represented the aspirant also said his candidate is avoidably absent but is very committed towards the debate as a platform for him to showcase his plans and policies for the constituency.