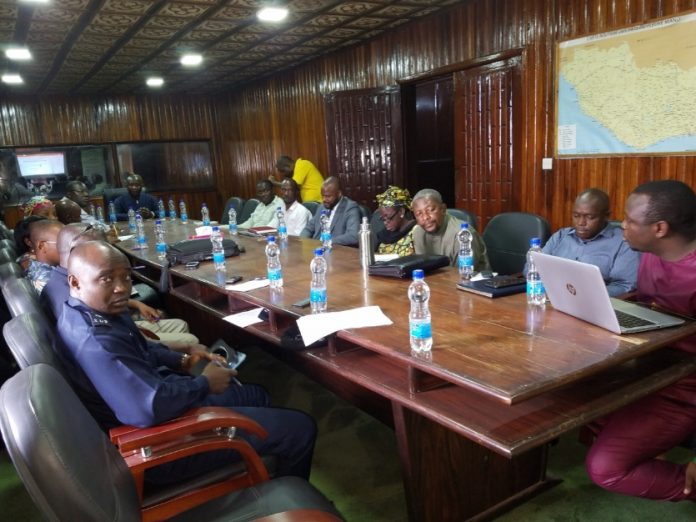 The Produce Monitoring Board (PMB) on Wednesday 16th May, 2019, engaged stakeholders including the Sierra Leone Police (SLP) , National Revenue Authority (NRA), Bike Riders Union and other stakeholders on how to combat smuggling of produce in the country.

This engagement meeting was held at the Conference Room of PMB, Lightfoot Boston Street in Freetown.

In his opening remarks, the Executive Chairman of PMB Dr. James Vibbi, thanked  all for leaving their busy schedules to polish the meeting, as the purpose is to discuss one of the most important element that annoy the produce sector and the country as a whole.

He noted that more than 70% of palm produce pass through smuggling to other neighboring countries which is very bad for our country to advance this he said that is why the  Produce sector taught it feet to dialogue and cooperation with all other sister partners to radically reduce smuggling in the country he noted.

the smuggling of farm produce.

He informed that as the Executive Chairman of PMB the want to match the effort of the government in boosting the country’s economy, noting that combating smuggling is one step in completing the government’s effort of revenue collection this he said that he determined to work with relevant stakeholders to invest in agriculture to move the economy forward.

In his Power Point presentation, the Director of Operations of PMB Dedan Sankoh, noted that the Produce Monitoring Board was established in 2013 by an Act of Parliament with the general mandate to promote the production, processing and marketing of high quality produce within established national and international standard requirements and ensuring the provision of well-regulated markets to enhance export earnings for all stakeholders along the value chain.

He fostered that the Act mandate PMB to control, promote and improve the marketing of produce in order to optimize the export earnings of farmers, encourage the production of quality produce which meet international standards, initiate and encourage the processing of produce with the aim of adding value to them for export and consumption.

In his statement Richard H. Senesie, Assistant Commissioner from the Ant-Smuggling Unit and Border Counsel of NRA, noted that Sierra Leone has over 800 crossing point and that they don’t have the manpower and amenities to guard these crossing points this he said that sensitization is also important in reducing smuggling in the country, noting that NRA has a lot to do as they are trying to recruit now intelligent officers he noted.

He stated that smuggling is all over the world, but as a commission, it is obligatory to combat smuggling, which is why this meeting is important to not only PMB but also all stakeholders involved.”

In his contribution Bike Riders Union President Umaru Talie Bah, informed that police and NRA alone cannot stop or fight smuggling in the country as I called on PMB to embroil the military also in the combat smuggling.

He called on PMB to charge also drivers that are caught in smuggling and not the business owner alone. Fines should be levied according to the quantity of goods in smuggled.