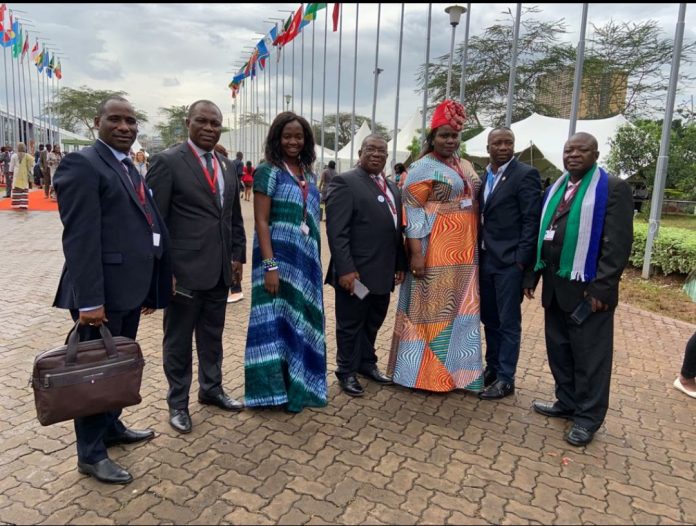 As this year marks the 25th anniversary of the International Conference on Population and Development (ICPD) which took place in Cairo 1994, where 179 governments adopted a landmark Programme of Action, which set out to empower women and girls for their sake, and for the benefit of their families, communities and nations; Sierra Leone has shown dedication by joining several others at the ICPD25 Conference in Nairobi, Kenya.

The Summit is held from 12th -14th November 2019, at the Kenyetta International Conference Centre, in the Kenyan capital Nairobi, and the Sierra Leonean delegation which is drawn from various sectors including Government officials, youth groups, UNFPA, UN Women, Members of Parliament and Sierra Leone High Commission in Nairobi officials, is headed by Minister of Planning and Economic Development, Dr Francis Kai-Kai. The Minister is expected to deliver a statement during the ICPD25 Conference where he will present Sierra Leone’s commitment to the attendant challenges of the country’s growing population and in development.

This year’s summit, according to the organizers, “will take an integrated approach, covering five themes and highlighting the power of gender equality, youth leadership, political and community leadership, innovation and data, and partnerships to accelerate progress throughout.”

The five themes are: Universal access to sexual and reproductive health and rights as a part of universal health coverage; financing required to complete the ICPD Programme of Action, and to sustain the gains made; drawing on demographic diversity to drive economic growth and achieve sustainable development; ending gender-based violence and harmful practices; and lastly, upholding the right to sexual and reproductive health care even in humanitarian and fragile contexts.

“Nairobi Summit will reenergize the global community, breathe new life into the ICPD agenda and sustain and amplify gains made since 1994. It will be a springboard for governments and other organizations to announce voluntary, global commitments—including financial ones—that will accelerate progress. Innovative financial models and far more resources—from governments, international financial institutions and even private sector partners—are required to finish the ICPD agenda by 2030” organizers confirmed.