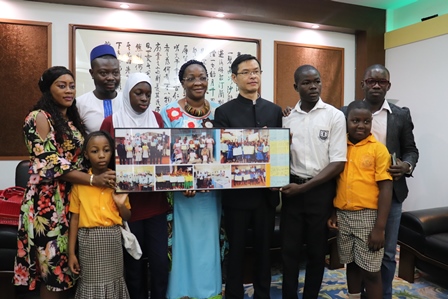 The Sierra Leone China Friendship Association (SiLCHA) has expressed solidarity with the People’s Republic of China in relation to the COVID- 19 that has brought that nation almost to a standstill. The association paid a courtesy call on the Chinese Ambassador to Sierra Leone, Ambassador Hu Zhanjiang, on Thursday, 27 February, to empathize with the people of China.

The visit paved the way for the Association to officially welcome Ambassador Hu to Sierra Leone after he was appointed to serve his country in this part of the world, SiLCHA also presented arts work done by children and the official song called “Come On, China! done by the founder of SiLCHA and team Mariatu Kargbo, known as the Black Pearl of China.

Chairperson of SiLCHA, Mrs. Onike King ,sympathized with the Chinese Government for the human and economic loss caused by the disease on behalf of the Association and assured the Ambassador of SiLCHA’s continued support at all times.

She spoke about the friendliness of the Chinese people and the support China has been giving to Sierra Leone over the years. “We are with you and we understand what you are going through, Sierra Leone experienced it during the Ebola outbreak in 2014 and we know what it means.”

She pointed out that what SiLCHA is doing is sustainable because they have different branches which include education, media, culture and arts among others.

SiLCHA Publicity Secretary, Ibrahim Bangura reflected that China was the first nation to come to Sierra Leone’s aid during the Ebola epidemic. “Your support towards this nation is great, we equally stand with you during your own period of challenge.”

He continued to say SiLCHA is all about telling Sierra Leoneans that China is a trusted friend and the relationship between Sierra Leone and China is a friendly and family one which they want to continue because that relationship is about 4 decades old.

SiLCHA’s Secretary General, Ibrahim Joenal Sesay emphasized that the bond with the two countries is very great. He said SiLCHA is looking forward to a much closer relationship and cooperation with the Embassy.

Ambassador Hu commended the Association for their concern and said they have received lot of solidarity messages from Sierra Leoneans for which he said they are very pleased.

He continued by saying China and Sierra Leone have enjoyed a mutually beneficial relationship since 1971 and that they will never forget the role played by Sierra Leone in ensuring China secure a permanent seat at the United Nations.

He disclosed that they have urged all Chinese to strictly comply with the measures that the Sierra Leone Government has put in place for the safety of all.

He assured that Sierra Leonean students and other nationals living in China are well taken care of during this crisis and that they are making success in the fight against the virus and they are doing everything possible to ensure it does not become pandemic.

He assured that they will continue to work with their Sierra Leonean brothers and sisters, China-Sierra Leonean Cooperation and also with the Association.

Ambassador Hu also presented a printer and a digital camera as gifts from the Embassy to support the running of the Association’s Secretariat.

The children wrote notes which they want the Embassy to present  to the children of China as a sign of their solidarity to show that they are with them.

Mariatu is an artist and philanthropist who was born very poor in Sierra Leone.

She came to fame in China through CCTV’s Road to the Stars talent show and is now devoted to giving back to less privileged people around the world. She was among the first foreign volunteers at the Sichuan earthquakes in 2008 and 2010 and was appointed as Cultural Ambassador-at-Large by the President of Sierra Leone in 2016.

Mariatu achieved Sierra Leone’s first ever Guinness World Records title in 2012 and teamed up with Tencent and the World Food Programme to achieve a second world record in 2014 for contributions to a charity fund-raising event in 24 hours in support of the Ebola-affected countries of Sierra Leone, Guinea and Liberia.

Mariatu supports many charities in China, Africa and around the world and has established her own Foundation which has changed the lives of thousands of kids.

Mariatu was a finalist in the Miss World competition in 2009 and won two awards for Talent and Fashion. She has performed widely in China with top artists such as Jackie Chan and Yang Wenwen as well as performing for the Top 100 Entrepreneurs, including Jack Ma (founder of Alibaba).

In 2018, Mariatu was chosen to perform for President Xi Jinping and the First Lady and all Africa’s Presidents and First Ladies at the FOCAC event in Beijing. In 2019, Mariatu was selected as one of the Top 100 Influential Africans under 40 by MIPAD at the United Nations in New York.