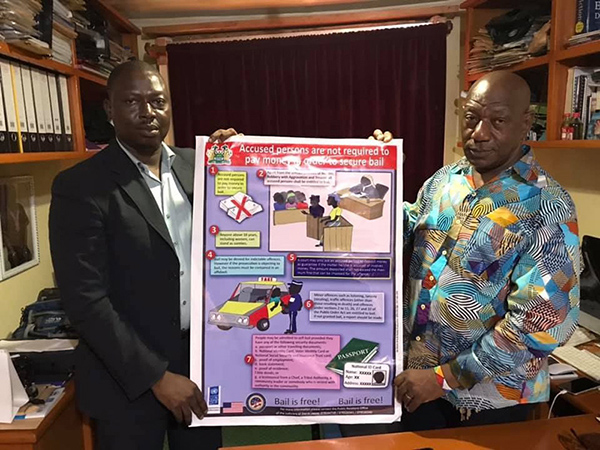 The President of the Sierra Leone Association of Journalist (SLAJ) Mr Kelvin Lewis and the Executive Director of Legal Aid Board Madam Fatmata Claire Carlton-Hanciles have manifested high-level commitment in popularizing the content of the 2017 Bail regulations.
Mr Lewis, SLAJ President said, his association will ensure that the points below will be effectively popularized:

1. Accused persons are not required to pay money in order to secure bail.

2. Apart from the serious offences of Murder, Robbery with Aggravation and Treason all accused persons shall be entitled to bail.

3. Anyone above 18 years, including women, stand as sureties.

4. Bail may be denied for indictable offences.  However, if the prosecution is objecting to bail, the reasons must be contained in an affidavit.

5. A Court may only ask an accused to deposit money as a guarantee if the matter he /she is accused of involves money. The amount deposited shall not exceed the maximum fine that can be imposed for the offence.

6. Minor offences such as loitering, larceny (stealing), traffic offences (other than those resulting in death) and offences under sections 2 to 15, 26, 27 and 32 of the Public Order Act are entitled to bail. If not granted bail, report should be made to the leadership of the Judiciary of Sierra Leone:

7. People may be admitted to self-bail provided they have any of the following security documents:

a. Passport or other travelling documents
b. National Identity Card, Voter Identity Card or National Social Security and Insurance Trust Card;
c. Bank Statement;
d. Proof of residence- light and water rate bills etc
e. Title deeds; or
f.  A testimonial from a Chief, a Tribal Authority, a community leader or somebody who is vested with authority in the community.