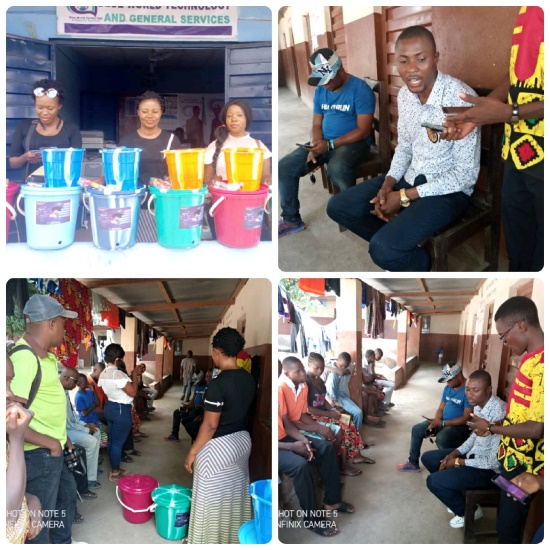 In their bid to complement the effort of the government to reach communities with preventive messages against the coronavirus, the Sierra Leone Association of Women In Journalism (SLAWIJ), headed by its Executive President, Millicent Kargbo and other members of the Association, embarked on a community awareness raising campaign at Oku Town in Wellington on Saturday 28th March 2020.

Speaking to the Chief at Ward 403 Constituency 114, Millicent Kargbo explained that they are a group of concerned female journalists from both the print and electronic media, desirous of helping residents in the country to fight against the virus. In this regard, she continued, they taxed their membership and came up with some amount of money, which they have used to purchase the veronica buckets, soap and hand washing lotions for the community.

She then went into detail to explain the various measures that should be taken to prevent the disease, which included: hand washing, avoidance of body contact, hand shaking, reduction of gathering to the barest minimum etc. She also admonished residents and the chief that in the event of persistent coughing, uncommon fever, extreme fatigue and difficulty in breathing, residents should call 117 for emergency response. She admonished them not to ‘pepper doctor’, as by so doing, if the patient is infected by the virus, it will spread and infect others. She called on the Chief to disseminate the message to his subjects in the community.

In his brief statement, Chief Alimamy Conteh of Ward 403 in Constituency 114, Oku Town community, welcomed the team, expressing satisfaction for their consideration of his community in this drive. He assured them that he will spread the message to his executive, who will in turn do the same around the community. He recalled the era of the Ebola and the loss suffered by the nation, stressing that this time with no case yet reported, he will do his best to ensure that the country stays zero.

Visiting another section of the community, where a non-formal school operates, The Executive President again admonished residents that action should be taken now to ensure that the disease does not come to the country. She further recalled the Ebola epidemic, which claimed the lives of many Sierra Leoneans, that a good number of women and children died and that the effect of that disease is still being felt today across the country. She appealed to her audience that they should adhere to the directives of the government and the Ministry of Health in order to maintain the zero case situation.

She further informed her audience that whilst many countries around the world have recorded cases of the coronavirus, Sierra Leone has been blessed not to have any. It is the desire of everybody to have a zero case situation throughout the whole pandemic and it is this that has prompted them to galvanise the little resources at their disposal to provide them with the veronica buckets, soap and hand washing lotions. Members of the team demonstrated how to go about the hand washing process. Present were the Councillor of Ward 403, Councillor Arthur Sheku Mansaray, Sorie I. Kamara, proprietor of the non-formal school and Ward Secretary and other elder residents in the community.

Nurse Magdalene Baimba, a resident in the community aptly demonstrated the way to wash hands to prevent contracting the virus. She also explained that the waste water used after washing of hands should be emptied in the toilet.

In her closing remarks, one of the Directors of the Association, Madam Mariama Coker, re-echoed the words of the EP and encouraged all to observe the necessary personal hygiene explained to them and to adhere to the directives of the government. She also admonished them to follow the process of hand washing demonstrated to them as this will help to keep them alive and the virus at bay.

The engagements with the various sets of people was climaxed with the handing over of the veronica buckets, soap and hand washing lotions and a vote of thanks from the councillor. 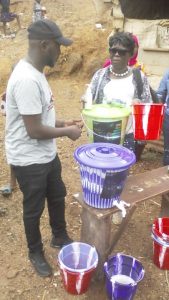 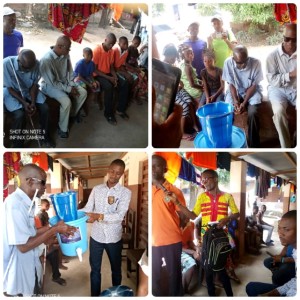