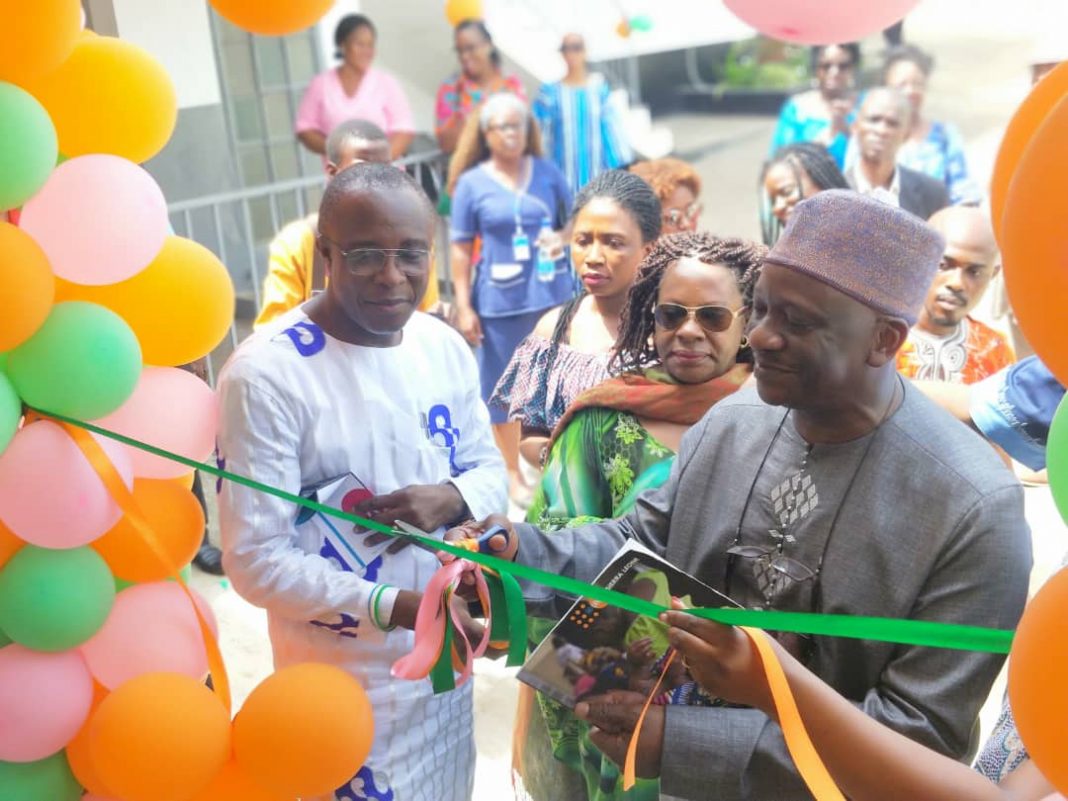 As part of fulfilling its corporate social responsibility and its strides towards reducing maternal and neonatal death rates in the country, HEINEKEN Africa Foundation (HAF) and Sierra Leone Brewery Limited (SLBL) on Friday 21st February 2020 commissioned an Antenatal clinic worth 2.2 billion Leones at Well Woman Clinic, Murray Town in Freetown.

In his statement, Corporate Affairs Manager of Sierra Leone Brewery Limited, Albert Ojo Collier pointed out that it is indeed a great honour and privilege to officially commission the antenatal clinic project on behalf of the HEINEKEN Africa Foundation (HAF) and SLBL, to the people of Sierra Leone, through the Well Woman Clinic. He added that the project proposal was approved in 2019 by the HAF Board for total sponsorship to provide sustainable antenatal and postpartum services for 20,000 women in targeted areas in Sierra Leone for over 3 years supporting and ensuring 92% safe delivery of healthy babies to healthy mothers.

He said that although the Government offers free antenatal and under five medical services, however, few antenatal clinics (Government or Private) offer a comprehensive antenatal and post-partum service including ultrasound examination with onsite doctors for referrals and other services such as family planning counselling, sexually transmitted infections treatment and child immunization are also constrained in providing routine services at these antenatal clinics.

He disclosed that they are very proud to continue as a strong support to the health of women in Sierra Leone by supporting private sector initiatives of this nature, underscoring that they will do the official opening of the antenatal clinic and the deliverables include providing the following:

He added that the beneficiaries of the project as per the target will be approximately 20,000 women over a period of two to three years and that the investment that HEINEKEN Africa Foundation has put together for the project amounts to EUR 209,722 which is well over Le 2.2 Billion (2,259,754,550) in equivalent.

“We count on the support of all Sierra Leoneans to continue to promote our brands. Buy your own locally manufactured Maltina non-alcoholic, Star Beer, Star Citron, Mutzig Beer, Guinness Stout, Amstel and Trenk Dark Malt Energy Drink among others. This is the only way you can help to support our business and sustain our continued support to such projects,” he maintained.

Chief Executive Office, Well Woman Clinic, Jennifer Renner-Thomas, expressed appreciation to HEINEKEN Africa Foundation and Sierra Leone Brewery Limited for the gesture which he said was not only important but timely.

She disclosed that they won their first HAF prestigious award in 2010, which project was named the Prenatal Equipment Project (PREP), so called because all activities centered around a State of the Art Ultrasound Equipment for early detection of abnormalities in pregnancy for low income women and that the project which cost only $50,000 allowed approximately 2500 women to be screened free of charge for early detection of abnormalities in pregnancy, adding that they received support from UNFPA for the cost of registration for these women and MEPS took on the administrative aspect.

She said that during the programme they realized that women who were not registered in these main towns upcountry or rural areas came from at least 20 clinics, PHUS and to register for the ultrasound service and so again they turned to their benefactors, the Heineken Africa Foundation and sold the idea of an Antenatal/postnatal Clinic at the Clinic itself, adding that it is in keeping with their vision of reproductive health care for the underprivileged and a one stop health facility thus enabling pregnant women to access a fully equipped antenatal/postnatal clinic.

Underscoring the description of the Project she disclosed that the total cost of the Project is based on a very conservative budget of $319,000 for 3 years for which Heineken Africa Foundation is funding $226,500 or Eur209, 722 (71%) and the rest, that is, $92,500 or Eur85, 100 (29%) from MEPS Trust and the Public and that the project has a two-pronged strategy: it is both clinic based and an outreach to Sussex and Waterloo with the main aim of assisting the Government reduce maternal and neonatal mortality rates in our beloved country.

United Nations Fund for Population Activities representative Dr. Abiodun Oyeyipo noted that the clinic has been built and being commissioned demonstrating the deep commitment of the sponsors and the leadership of Well Woman Clinic to uplift the health status of women in Murray Town community and the adjourning catchment areas through the provision of quality maternal health care services.

He added that the maternal health indices for Sierra Leone are not currently very pleasing, stating that Sierra Leone is among the countries with the highest rates of maternal, infant and child mortalities in the world. He said according to the 2013 SL DHS estimated that the MMR was 1,165 deaths per 100,000 lives births and women in Sierra Leone have a 1 in 17 lifetime risk of dying due to pregnancy or childbirth.

He reiterated their commitment in delivering a world where every pregnancy is wanted, every childbirth is safe, and every young person’s potential is fulfilled, in that regard they will continue to partner with Government and their partners in their efforts to improve access to quality SRHR services in the country.