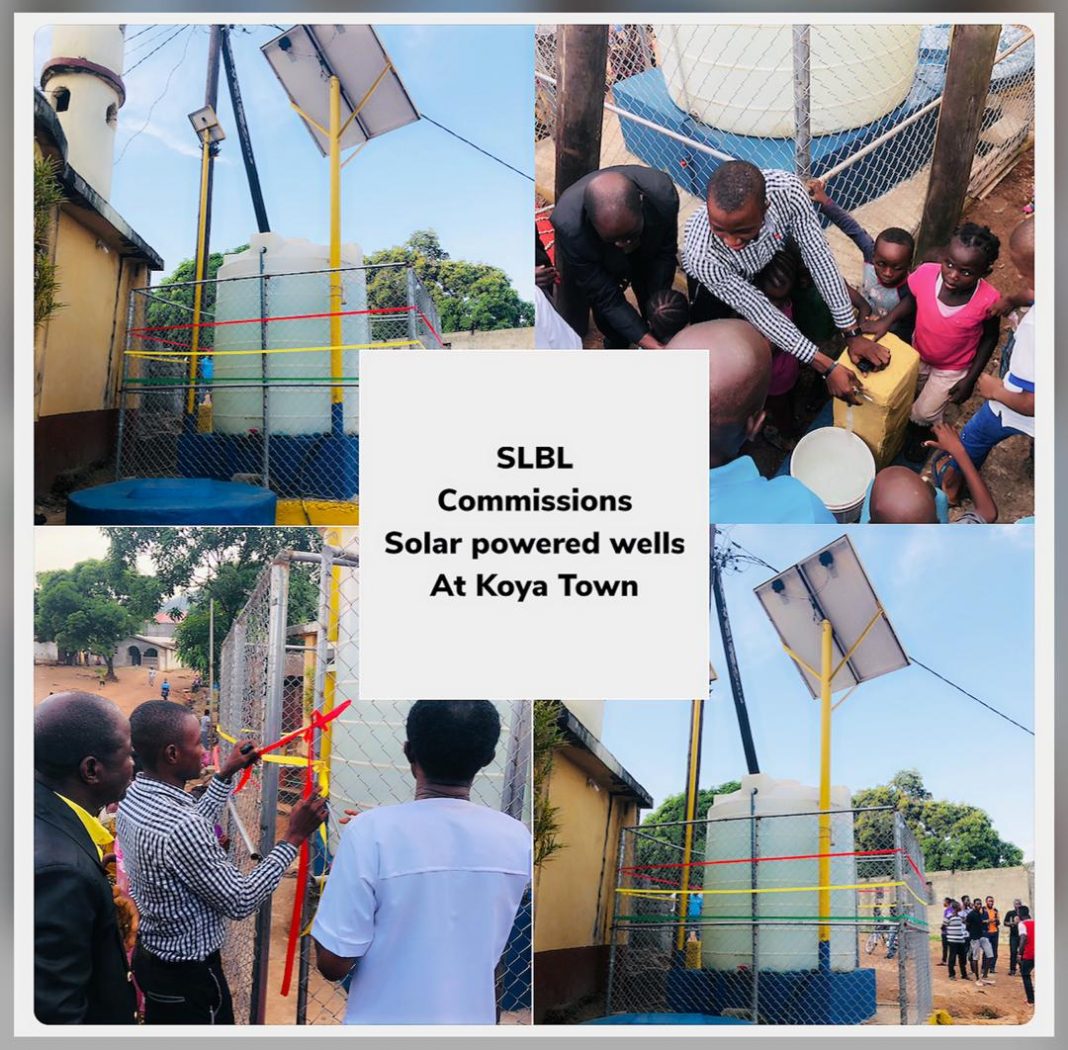 As part of living up to expectations, in terms of impressively and timely rolling out its Corporate Social Responsibility, the Sierra Leone Brewery Limited (SLBL) has on Monday 2nd December, 2019 commissioned the Second Phase of the final set of Submersible Solar- Powered water wells within the Koya Community in the East End of Freetown.  During the commissioning event stakeholders and residents of Koya community and its environs expressed profound delight and praised the business entity for what they referred to as its timely intervention.

The programme was graced by the Constituency youth, development organizations, elders, chiefs, councilors, past and present Members of Parliament, religious leaders and a host of other residents in the communities.

In his address, Brewery’s Corporate Affairs Manager, Albert Ojo Collier expressed satisfaction for the candid and frank attributes they outlined about the institution, adding that it is indeed a great honour to witness the commissioning of the final set of sub-mersible solar powered wells on behalf of the Heineken Africa Foundation, through the Sierra Leone Brewery Limited.

He said that they were commissioning two more solar powered water wells to alleviate the sufferings of residents to access pure water supply, noting that the investment that HEINEKEN Africa Foundation provided for the implementation of the project amounts to EUR 69,458 which is well over Le 600 Million in equivalent.  He said they are proud to inform the gathering that they have put in place proper procedures for the utilization of funds in a transparent and responsible way assuring that funds are always used judiciously for their intended purposes.

He said the Sierra Leone Brewery Limited continues to play an important role in the social and economic growth of Sierra Leone through their Corporate Social Responsibility agenda. The Corporate Affairs Manager underscored that with the assistance of  HEINEKEN Africa Foundation they recently approved a new project for the support of an improved ultra-sound maternity project for Well Woman Clinic at Murray Town in 2018/2019, adding that they have also commissioned a Mini Dam at Mountain Peacock Farm which is now benefiting over 12,000 residents also pointing out how they gave support to a Water and Sanitation Project for a school in Constituency 115 through the Honourable Member of Parliament, Alpha Bah, supported the Lion Heart Foundation Hospital and Masanga Hospital both in Northern Sierra Leone. He also mentioned that the construction of the Wellington Community Hospital has been completed and is now set for commissioning. Collier intimated that the implementation of the Calaba Town Maternity Hospital in conjunction with the Freetown City Council is also in speedy progress and due to be completed this year.

He disclosed that since 2014, SLBL, together with the Heineken Africa Foundation invested an estimated Le 6 billion on corporate social responsibility projects emphasizing how they will continue to do more for worthy community projects to impact positively on the people of Sierra Leone.

“At Sierra Leone Brewery Limited we are committed to the people of Sierra Leone and as such we want to ensure that every project intended for local communities that is funded by us or by any of our business partners such as Heineken African Foundation is implemented and completed according to our agreed project plan, in a clear, credible and transparent manner. We selected Councillor Mohamed Tholley to champion this particular project and we are proud that he has completed the final phase,” he expressed delight greeted by thunderous applause from the audience.

However, he called for the support of Sierra Leoneans especially the host community, Wellington, to help promote their brands and purchase local content in MaItina, Trenk Dark-Malt energy drink, Star Lager Beer, Star Citron, Mutzig, and Guinness among others saying such is the only way they can continue to support certain projects.

Councillor for Ward 405, Constituency 115, Mohamed Tholley, communicated warmest appreciation to SLBL for their unflinching support over the years, adding that the commissioning of the Second Phase of Sub-mersible Solar- Powered water wells at Koya Community will promote sanitation and mitigate the water problem residents in the Constituency have been grappling with.

He called on all to embrace development and put politics aside as the time for politics is now over, noting that the Sub-mersible Solar- Powered water wells will not only benefit a particular political party but everybody within the Constituency. In that regard he called on all constituents to embrace the facility and take it as their own.

He maintained that these Sub-mersible Solar- powered water wells are going to be controlled by community residents revealing that after the commissioning a Committee of seven people will be appointed to comprise the chief, religious leaders, youth, etc in order to monitor the way the facility is used. He called on other institutions to emulate SLBL in supporting deprived communities.

The cutting of the tape during the commissioning of the Sub-mersible Solar- Powered water wells at the Koya Community, climaxed the event. 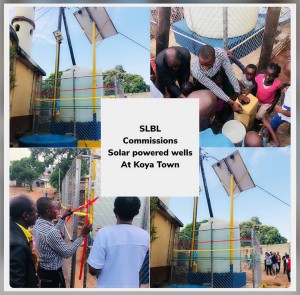 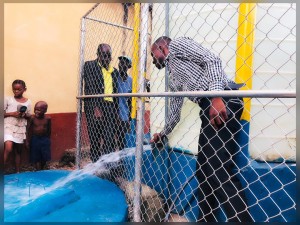 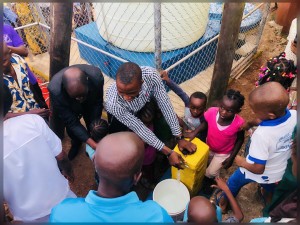