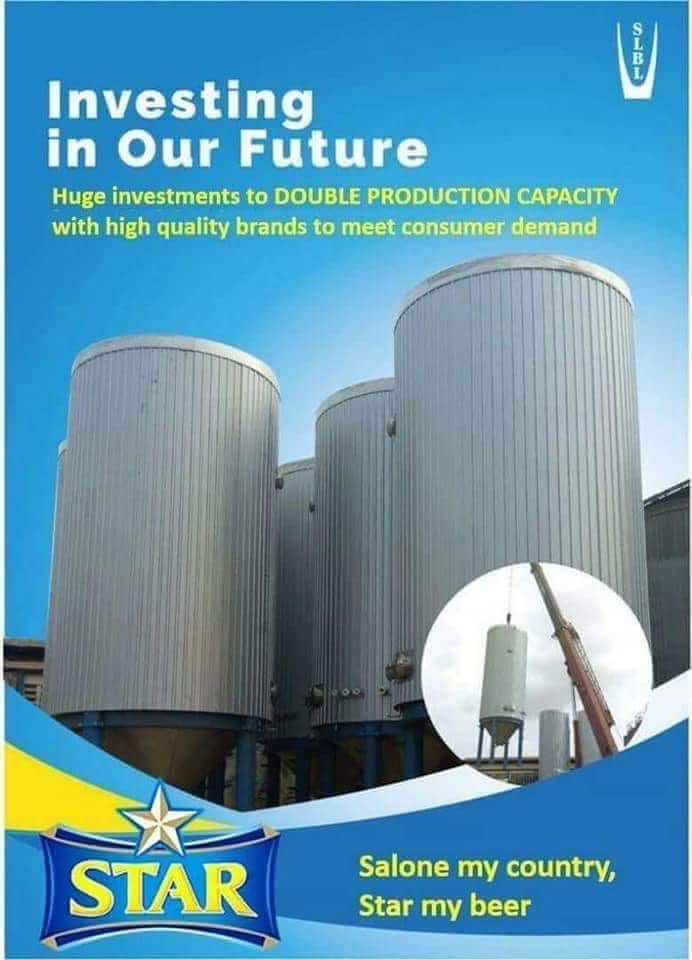 The country’s premier brewer of alcoholic and non-alcoholic beverages, Sierra Leone Brewery Limited (SLBL)  canned Maltina drinks are found all over the place and going at an affordable price of four thousand Leones (Le4,000). From gauging the perceptions of consumers in buses, the sidewalks and in other social gatherings many unanimously confessed that they are truly enjoying Can Maltina drinks with many of them candidly saying that it is really refreshing making them feel energetic.

It was also realized that SLBL’s other beverages manufactured in cans are also doing well in bars and restaurants although not seen going faster as Maltina is doing although that is understandable simply because they are traded on the streets. One thing which has been confirmed by Management of the company is that as we slowly approach the festive season when there is going to be a lot of social activities SLBL will endeavour to do its level best to ensure there is no shortage so that people will enjoy having fun.

To demonstrate determination that it means business and is here to satisfy its numerous customers the Sierra Leone Brewery Limited (SLBL) in collaboration with Krones, a German firm that specializes in the supply and modernization of production plants, together with a large team of SLBL’s locally trained engineers and technicians in the recent past successfully installed and started operating a new production line.

The project costs over Le 278 billion and is one of the most expensive the Brewery has ever embarked on to expand and upgrade its facilities. It is another large investment of the company to grow the economy and contribute largely to the manufacturing sector of Sierra Leone. This major step will improve the facilities of the Sierra Leone Brewery Limited in their journey to reach state-of-the-art status.

In the same vein, the SLBL collaborated with the Freetown City Council to support sanitation projects in Ward 406 that was worth over 400 million Leones through Heineken Africa Foundation (HAF), and provided a Toyota Dyna van to collect and dispose waste.

It could be recalled that the SLBL has been playing a key role in maintaining sanitation in its local community since its establishment. As part of its Corporate Social Responsibility (CSR) the Sierra Leone Brewery has done much for Wellington, where its factory is located in the East of Freetown, by developing the community and its surroundings including Peacock Farm. Such interventions add value to the lives of the people, especially women and children.

The SLBL provides safe drinking water and encourages women’s participation in agriculture and other economic activities that have been the main thrust of their livelihood over the years. This is to ensure that the SLBL helps the people they serve through small scale enterprises that provide safe and affordable drinking water to the communities in need.

The company, with the objective maximizing production, embarked on both human and capital resources in order to continue its dominance in the market and meeting the needs of its customers. Now, it is boasting of increased fermentation tanks; an upgraded waste water treatment plant, mash filter equipment and cooling plants that enable it to produce qualitative and safe beverages that are of high standards.

In addition to the many noble things done by the SLBL for the people of Sierra Leone, the company is ensuring that farmers who grow sorghum in the provinces are technically and financially empowered through trainings and inputs. These sorghum farmers, who are over 25,000 in number, are steadily supplying Brewery with raw materials or ingredients used by the company in manufacturing their products. The effect is that it makes farmers financially independent.

In terms of taxation compliance, the Sierra Leone Brewery Limited is a leader that defines the true meaning of taxation. The SLBL pays enormous taxes to the government and helps it mobilise domestic revenue collection through the National Revenue Authority.

Albert Ojo Collier is the Corporate Affairs Manager at SLBL. He disclosed to this press that in the last three years they have invested over 278 billion Leones as part of their expansion project to meet international standards and the growing demands of customers.

He made this disclosure during a recent press tour conducted at the SLBL head office, Wellington Industrial Estate, East of Freetown.

During the tour, Mr. Collier said ‘in order to upgrade our Brew House, we recently overhauled our packaging bottling line costing 3.5 billion Leones. Since 1962, we pride ourselves with that rich heritage tied to the history of the country, with a vision of growing with Sierra Leone to further improve the efficiency of our bottling operations and to ensure our service to our revered customers and consumers.’

The importance of ‘Made in Sierra Leone’ products was emphasized by Albert Ojo Collier as a major milestone in enhancing the Local Content Policy. “As a responsible company that is taking the satisfaction of our numerous customers a priority, we have invested a lot to ensure that we expand and in the process create job opportunities in line with the Local Content Policy,” Mr. Collier noted.

The implementation of the Local Content Policy has empowered 25, 000 local farmers, producing Sorghum used to produce beer and stout. According to Mr. Collier, this contributes to employment and revenue collection as it puts money into the pockets of ordinary people.

Indirectly, there are tens of thousands of Sierra Leoneans employed today as transporters, wholesalers and retailers. Consumers today maintain that SLBL products are up to international standards and are affordable more than the imported varieties.

As it continues to invest in and increase its production line, SLBL’s can drinks becoming viral, planning well for the festive season as well as through other interventions the company is meaningfully contributing to the socio-economic development of the nation in different fronts and to crown it all serving as an entity worthy of emulation.