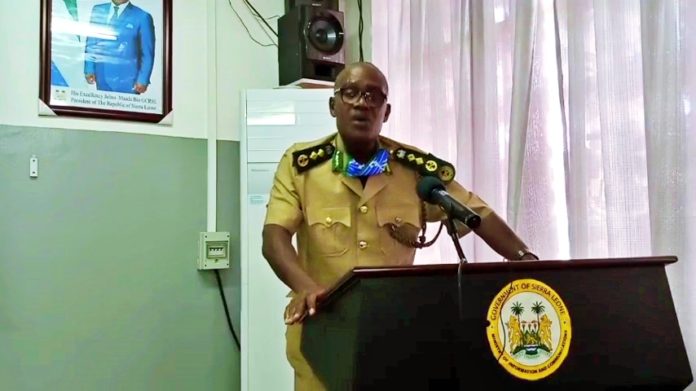 Assistant Superintendent of Corrections of the Sierra Leone Correctional Services (SLCS), Umaru Vandi Magbay, who also happens to be the father of a seventeen years old girl, who is a SSS1 Science pupil, reported a matter of sexual penetration against the aforementioned daughter by one of his (the father’s) colleagues, Mohamed Massaquoi, an incident that took place in Makeni, Northern Sierra Leone.

Since the matter was reported to the Police in Makeni on the 27th. March 2022, it is still under investigation at the Family Support Unit and the victim is presently housed in a safe home in Makeni.

On the 7th April 2022, the Police communicated to the Regional Commander of the Sierra Leone Correctional Service (SLCS) North-East, Chief Superintendent of Corrections (CSC) Christian R. Sisay requesting for the production of the accused person (officer Mohamed Massaquoi).

According to the complainant, Umaru Vandi Magbay, on the 8th April 2022,, his boss, the Regional Commander North, called him on phone with anger querying him  as to why he reported to the Police  the matter of sexual offence without his consent.

In his response, the father of the 17 years old daughter, responded that he called him on his phone twice but to no avail and after that he then decided to call his Deputy, the Chief Superintendent of Corrections (CSC), Moses B. Conteh and explained the issue to him with the expectation that he would further relay the information to the Regional Commander.

The father continued to intimate that he  also reported the matter to the Second-in- Commander of the Makeni Correctional Centre, Superintendent,  Muniru Kamara, who was at that time attending a funeral in Bo. According to the father, it took over a week without any of them calling him or attempted to meet him with the aim of looking into the allegation.

This medium was made to understand that the Regional Commander told the father on the phone that he has already committed an offence for in the first place failing to consult him before reporting the matter to the Police and as a result of that a disciplinary action will be instituted against him by querying him.  It was also learnt that the Regional Commander made it categorically clear that he was not going to produce the accused person, Mohamed Massaquoi further revealing that as a matter of fact the accused person has been transferred.

The complainant claims that there is a recorded audio containing the responses of the Regional Commander related to the matter.He continued that after that transpired the accused person , Mohamed Massaquoi, could no longer be located and he came to understand that he is on the run.

Left in a dejected mood, the father of the alleged abused 17 years old girl is calling for justice to prevail. He is claiming that his boss, the Regional Commander, has been boasting of being in constant touch with the AIG North-East with regards the sexual penetration case maintaining that it would yield no justice thereafter, in other words nothing will happen next against the alleged perpetrator.

The father of the child stated that he was reliably informed that the Regional Commander mentioned during a muster parade that the Police AIG is the one who has been calling him assuring him that there is nothing to worry about.

It is said that during the muster parade the Regional Commander boasted that it is good to have connections.

As for the complainant he was not present when the muster parade took place as he is on study at the University of Makeni (UniMak) and highly  engaged in his academic pursuit.

This medium has established that there is an audio recording of the discussion between the Regional Commander and him plus a copy of   the request letter sent by the Police.

It was said that before his transfer memo was released,  the Regional Commander  had threatened to effect a transfer of one Principal Officer called Felix Abu Turay whom he claimed is the one who has been motivating the complainant to pursue the matter  with the Police.

The father of the 17 years old girl, who is the complainant, stated that had it not been for his transfer, the Regional Commander planned to locate an Officer in the kitchen room where his kitchen utensils and water containers are with the objective of suppressing him in the quarter where he is  occupying only a single room.

The father also narrated how he was asked out of the Regional Head Quarter on the 14th April, 2022, when he went there to receive his rice supply. According to him he was asked out on the premise that he went to report to the Police about a sexual offence matter without his consent maintaining that he is still the Commander until he is relieved.

It was understood that some officers from the Family Support Unit in Makeni and the victim together with some staff from the Safe Home on 16th April 2022 visited the scene of crime at the Correctional Barracks Mena, Makeni.

In a letter written by the Family Support Unit Coordinator North
East Region, D/ASP ,Siru Bakarr Kanu,  dated 7th April, 2022 and addressed to the Regional Coordinator North-East, Sierra Leone Correctional Service copying the AIG North-East, LUC Makeni Division, Human Resource Manager Correctional Service Makeni and captioned : Request For The Escort of Third Class Correctional Officer-Mohamed Massaquoi (3CCO) NO:3815, it was stated that, “Be inform that the above office is investigating an alleged case of Sexual Penetration of Child and other related sexual offences reported by Assistant Superintendent of Corrections Vandy Magbay of Block 3 Prison Barracks Makeni attached to the North East Correctional Center on behalf of his daughter who is 17 years of age against the aforementioned personnel who is currently working under your command.

In this vain, the letter continues, we are kindly asking that you use your good office to bring under escort the said Mohamed Massaquoi (3CCO No 3815) for him to answer to the allegation made against him on Friday 8 April 2022 at 10 AM for statement making.