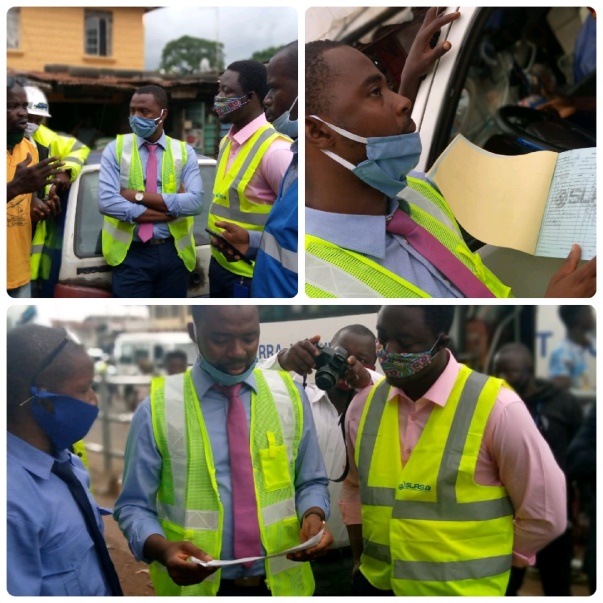 On the 29th June 2020,a team led by the Executive Director of the Sierra Leone Road Safety Authority (SLRSA), Ibrahim Sannoh and his Deputy Mr. James Baggie Bio conducted an on-the-spot check to major Lorry parks in the East End part of Freetown. The on-the-spot check is not unconnected with the Authority’s quest to monitor the implementation and enforcement of the use of passenger manifest by the Drivers and General Transport Workers Union at various lorry parks across the country.

The Executive Director, Ibrahim Sannoh told a cross section of drivers at the Dan Street lorry Park that the visit was a prompt and call to action in ensuring full compliance to the directives of His Excellency President Bio for the robust enforcement of the use of Passenger Manifest by all intercity transport services.  Routine checks were also conducted on vehicles to ascertain the correctness of Passenger Data on the Manifest of each vehicle. Further checks made at the Texaco lorry park proved that there was considerable level of compliance by drivers and there is robust enforcement done by the Drivers Union National Executives.

Sannoh said the SLRSA will continue to monitor the process to ensure total compliance. “Our Road Safety Corps and Traffic Personnel of the Sierra Leone Police will be deployed at strategic locations on the highways and will apprehend anybody that attempts to sabotage the initiative,” he said. He called on the Drivers Union and The Passenger Welfare Association to support the process.

Many onlookers commended the SLRSA   and called for proper and robust monitoring and enforcement of the process.