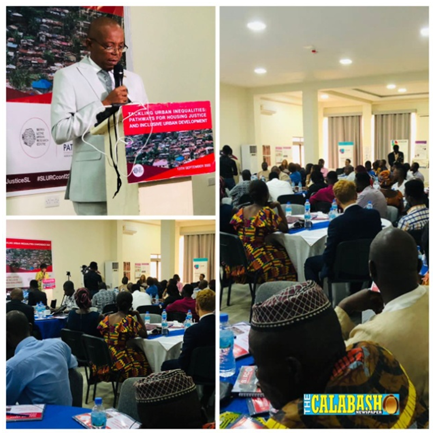 The Sierra Leone Urban Research Centre, a globally connected research institute with support from African Cities Research Consortium, Pathfinders and other donors, has collaborated with the International Institute for Environmental Development (IIED) and Pathfinders to convene a one-day conference on the 13th September, 2022 with the theme: “Tackling Urban Inequalities”. The event took place at the New Brook Fields Hotel in Freetown.

It must be noted that the conference is geared towards exploring what policies and actions can Governmental and Non-Governmental actors take to address urban inequalities through the provision of decent and affordable housing, understand major obstacles in achieving that, develop concrete recommendations and agree on commitments to drive the process of building inclusive cities and societies in Sierra Leone.

In his welcome address, Dr. Joseph Mcarthy, the Executive Director of SLURC intimated that Sierra Leone is urbanizing and has one of the fastest growing populations in Africa. He continued that nowhere is urbanization more acute than in the Western Area where the central and local Governments are increasingly coming under pressure to quickly close the widening gap of housing needs and the supply.

“As defined by us, housing is much more than the physical dwellings where people live, but includes the living conditions as well, consisting of the basic services which support people’s lives,” Dr. Joseph Mcarthy underscored.

He noted that six thematic issues have been their key research focus, which are land and housing, urban health, vulnerability and resilience, livelihoods and the city economy, mobility and transport and lastly urban services and infrastructure.

“In Freetown, the housing condition especially among low-income households is likely to worsen if urgent steps are not taken now to deal with the growing housing challenge,” the Executive Director expressed a concern

Dr. Joseph Mcarthy affirmed that the conference is specifically designed to provide a space to engage the outputs and to discuss and share experiences and learning critical to policy and reforms and, for driving change in the built environment.

In his closing remarks, he commended all their local and International partners for their unreserved technical support to SLURC. He also gave a special appreciation to all their financiers over the years.

The Minister of Lands, Dr. Turad Senesie, in his opening statement, congratulated the organization for putting together such a conference, which he called an historic conference, as he declared it open.

He further encouraged participants to develop a clear outcome of the conference, including the local materials and other impressive innovations and alternative financing models which SLURC and its partners presented for Government’s consideration..

Dr. Turad Senesie maintained that the housing situation in the country is troubling adding that they are grappling with a huge housing deficit estimated at 509,063 housing units, which according to him is the highest in the sub-region.

He emphasized that they cannot have a discussion on deeply rooted urban or spatial inequalities without addressing the housing challenges that exist for half of the country’s population.

“We have to provide innovative policy and technical solutions through public dialogue that are inclusive, participatory, climate-resilient and sustainable,” the Minister of Lands said.

The Mayor of Makeni, Sunkarie Kabba-Kamara stated that as a result of the growing population and urbanization, cities are faced with a boom in population growth with significant numbers of people living in slums and illegally constructed settlements without proper land allocation and plans by the city authorities.

She averred that the success of an urban development is heavily dependent on the willingness of local leaders to commit for the long term, to collaborate, change their working habits and take risks.

Dr. Alexandre Apsan Frediani of the International Institute for Environment and Development in his presentation highlighted the three most prevailing issues in six cities in Africa including Sierra Leone: dynamic rental markets are prevalent, the lack of coordination among different levels of Government in responding to housing needs and that housing policies and programmes favor large-scale construction companies, failing to support small scale interventions.

The highpoint of the conference were presentations made by various personalities in different sessions followed by a question and answer session.