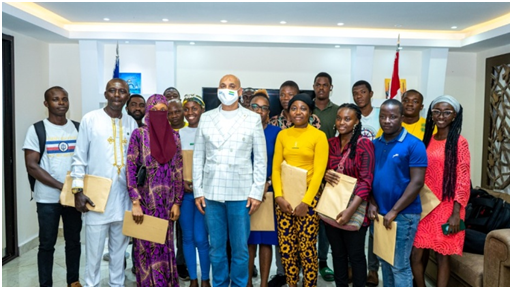 The Honorary Consul of the Republic of Hungary to Sierra Leone, Jihad N. Eter, has on Tuesday 13th September, 2022 handed over resident visas to 44 Sierra Leonean students going to pursue undergraduate and postgraduate studies in Hungary under the 2022/2023 Stipendium Hungaricum Scholarship program. The handing over ceremony was held at the Hungary Embassy on Matu Close, Spur Road in Freetown.

Speaking during the ceremony, the Honorary Consul, Jihad N. Eter, stated that on behalf of the Republic of Hungary he is pleased to announce that he is handing over 44 resident visas to 44 Sierra Leonean students who won the 2022/2023 Stipendium Hungaricum  scholarship.

He added that the move by the Hungarian Government in awarding these scholarships is to improve the education status of the Sierra Leonean students and it also part of their efforts towards complementing the Government’s human capital development initiative.

He pointed out that in December last year the Ministry of Technical and Higher Education under the Stipendium Hungaricum invited applications from suitably qualified Sierra Leoneans wishing to pursue undergraduate and postgraduate Courses in Hungary of which the Ministry received 280 applicants. He said after that the Ministry of Technical and Higher Education invited them for interview and those students who qualified proceeded to the next step.

The Honorary Consul maintained that after all those processes 47 students were selected for interview and 44 students only showed up for the interviews and they were awarded the scholarship.

He ended up by congratulating all awardees for their relentless efforts and urged them that as they travel to Hungary they must  take their studies serious of which after the completion of their courses they will come back home and contribute towards the development of Sierra Leone.

On behalf of the beneficiaries, Suffiatu Allieu Moigboi, who will be pushing Masters in Communications and Media Studies, expressed appreciation to the Republic of Hungary for the laudable venture which she described as move towards supporting Sierra Leonean students.

She said that in December 2021 she saw a notice displayed by the Ministry of Technical and Higher Education under the Stipendium Hungaricum inviting applications from suitably qualified Sierra Leoneans wishing to pursue undergraduate and postgraduate courses in Hungary and she grabbed the opportunity, applied and now she is a deserving beneficiary.

Suffiatu Allieu Moigboi encouraged her colleague beneficiaries to make good use of the opportunity in order to go and empower themselves and return to give back to society.

The ceremony was climaxed by the official handing over of the resident visas by the Honorary Consul of the Hungary to Sierra Leone, Jihad N. Eter. 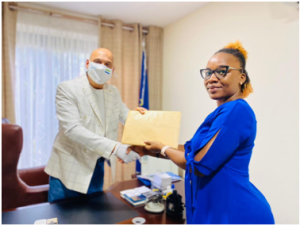