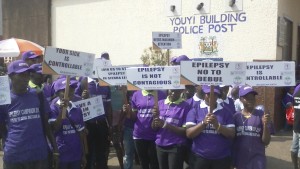 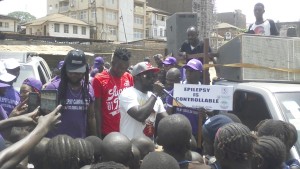 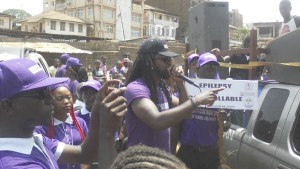 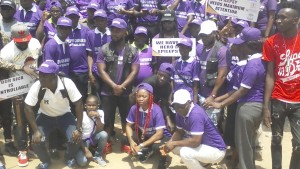 On Tuesday 12th March 2019, the Epilepsy Association of Sierra Leone (EAS) with the sponsorship of Sierra Pharma Tech (SPT) and in collaboration with the Ministry of Health and other partners, embarked on a city wide match to raise awareness about the disease. They were joined by top artists like LAJ, COLABO, JEANNIE, MACMUDE etc.
During the match the group went about spreading their message in the markets and along the streets as they passed by. Leaflets were distributed to on-lookers and passers-by encapsulating the misconception of the disease.
At the Municipal school compound along Lightfoot Boston Street, opposite the Nurses’ hostel, the association and a crowd of interested Sierra Leoneans, including school going kids were addressed by the super stars. LAJ told the audience that as popular musicians, it is their corporate social; responsibility to raise the awareness that epilepsy is a sickness and not a demonic attack or witchcraft.
He further maintained that it can be controlled if the patient is taken to the hospital early enough. Colabo, Macmude and Jeannie also described the sickness as one of those ailments that befalls people and can be treated. They further explained to the crowd that frequent visits to the various hospitals and PHUs across the country for treatment will ensure that the patients live normal life.
Speaking to this medium, Professor Lisk, a neurologist and technical adviser to the Association, said that contrary to traditional beliefs that epilepsy is as a result of demonic attack or witchcraft, the disease is caused by some damage to the brain (the cerebellum), which can be caused by a fall, or heavy blow to the head and even malaria (cerebral malaria). Its characteristic is a convulsive attack accompanied by foaming of the mouth. Whilst many citizens say that the fluid from the foaming, if touched by any person will see a transfer of the disease to that person, Professor Lisk dismissed that conjecture as false and impossible. He maintained that epilepsy is not contagious and cannot be transferred from one person to another otherwise those who take care of the patients when they get the attacks, would have contracted the disease. He wanted the public to know that there is treatment for patients suffering from the disease and that they should bring their family members and friends suffering from epilepsy to any of the hospitals in the country for treatment. Constant adherence to treatment will reduce the attacks and control the disease.
Speaking on behalf of the Association, the Executive Director Max Bangura, said that epilepsy is like hypertension or diabetes. It cannot be cured but can be controlled if the patient visits the hospitals or clinics regularly and take their medication. He disclosed that this awareness campaign was raised after visits to several parts of the country and the discovery that a lot of people had negative perception about the disease. He stated that in Bo, in just a single day, they treated 382 patients with epilepsy (some of them coming from nearby villages). In Freetown they are treating over 400 cases per month (some new cases and older ones). Connaught treats some 200 epilepsy patients per month whilst Rokupa hospital treats 170 every month (both old and new cases). He further disclosed that statistics show that there are Seventy Thousand cases (70,000) of epilepsy in the country. This figure is alarming, especially as perception of the public about the disease is that it is the result of demonic attack or witchcraft. He stated that that perception is wrong and the campaign is geared towards reducing this fear and the stigma that goes with it. He called on family members and friends of such patients to embrace them and bring them to the clinics for treatment. Epilepsy is not a demonic attack or witchcraft; it is a medical condition like all other ailments and can be controlled with proper care. It is not transferable from person to person and touching the foam from the patient’s mouth will not transfer the disease to anyone.
Max Bangura further disclosed that they have over 1500 trained health workers across the country administering treatment to such patients. He encouraged families to come with such patients to the hospitals for treatment and to avoid taking them to witch doctors for treatment as it has nothing to do with witchcraft.
However exponents of medicinal marijuana say that with scientific discovery of the herb as a viable drug for the treatment of epilepsy and tested in medical facilities in the UK, USA and CANADA with outstanding results, it is worth trying in the country to tackle this disease. In their view it is all the more reason that they are advocating for action to facilitate the cultivation of the herb and extraction of the relevant compound to deal with this and other ailments. Reference was made about a case in the UK where the parents sought an action to get the government to allow their kid to use the drug to address the seizure the kid experiences frequently.