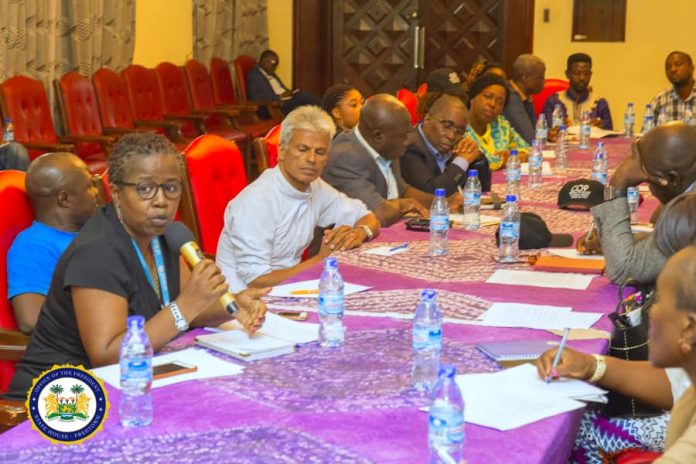 On Thursday 28th February 2019 at State House in Freetown, the Press Secretary and Presidential Spokesman and the Presidential Adviser and Head of Strategic Communications at State House engaged stakeholders as a follow up on President Julius Maada Bio’s declaration of State Of Emergency on Rape and Sexual Penetration.

Welcoming representatives from partner organisations in the fight against rape and sexual violence, Press Secretary, Yusuf Keketoma Sandi said he was happy with the turnout and stated that the essence of the meeting was to discuss further plans to deal with the rape of minors and work collectively to tackle the broader issues affecting survivors of rape and sexual violence.

Representative of the United Nations Fund for Population Activities, Dr. Kim Dickson, said they welcomed the declaration by the President and thanked him for putting the issue of rape and sexual-based violence at the centre of his governance agenda, adding that the pronouncement was great news for all organisations advocating against rape and sexual-based violence in the country.

Dr Kim, however, urged the government to act fast in strengthening laws that could provide a broader scope to addressing the problems of rape and sexual-based violence, noting that the declaration of a state of emergency was a strong indication of intent, but was also a temporary measure.

Rev. Fr Joseph Valiplackel of Don Bosco Fambul, a charity organisation specialised in child protection, also said that they had also supported the proclamation, adding that rape and sexual violence were damaging the future of the girl child at an alarming rate. He, however, called on the government to empower the Family Support Units, which are specialised units attached to police stations across Sierra Leone.

“I think the FSU should be empowered and strengthened as they have the mandate to investigate all forms of child abuse and violence against children – sexual and physical abuse, exploitation, including commercial exploitation, as well as internal and cross-border trafficking,” he said.

Chernor Bah, Executive Director of Purposeful Production, said that building on the concrete actions announced by the President and mirroring evidence, based on good practice, the national and global plans tackling rape and sexual abuse would focus on 6 major pillars.

Laws and Policies – The Initiative will work with the office of the Attorney General and Minister of Justice, Parliament and other stakeholders to update existing laws and policies, draft new ones, clarify tensions and conflict between customary laws and other laws, draft holistic policies and plans of actions and ensure compliance with international laws and best practices.

Institutions: The Presidential Initiative will work to strengthen the capacity of government institutions to deliver on the President’s declaration.

Prevention: A key focus of the initiative will be on prevention strategies and actions. The Initiative will work with partners to understand root causes and patterns of rape and sexual violence in Sierra Leone, develop strategies to tackle all forms of discriminatory gender attitudes, norms and practices that perpetuate rape and gender-based violence.

Providing Essential Services to girls and women who come forward: This pillar is about making sure services are available, accessible, friendly and effective in responding to and dealing with rape and sexual violence across Sierra Leone. The Presidential Initiative will work with various governments, UN and local stakeholders to make sure the full range of basic health, psychological, legal and other services are available to victims and survivors of rape in every corner of the country.

Quality Disaggregated Data: Creating a quality-disaggregated database of the types of sexual violence, prevalence rates: This pillar will also work to ensure to create a sexual offenders’ database.

Women’s Movement and Civil Society: Coordinated involvement of the women’s movement and civil society actors. Providing a platform for a community-driven approach to solutions and ensuring local ownership.

The Presidential Adviser and Head of Strategic Communications at State House, Dr Patrick Muana, thanked the various stakeholders for their invaluable inputs, contributions and commitments to ensure that rape and sexual-based violence were mitigated. He promised to brief the President on the recommendations of the outcome of that stakeholders’ engagement and to inform them of future meetings that would be geared towards putting an end to the impunity of rape and sexual penetration.