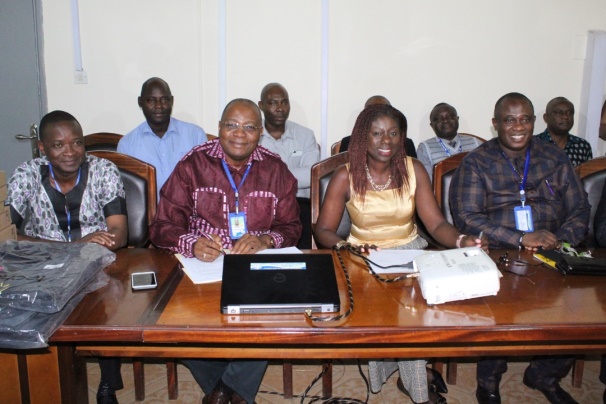 Statistician General, Prof. Osman Sankoh, received the UNFPA Country Representative to Sierra Leone, Dr Kim Eva Dickson and team including Dr Chris Oyeyipo and David Kanu at his AJ Momoh Street office in Freetown on Tuesday 14th January 2020, when they paid a courtesy call on him.

In his statement to the UNFPA team, Prof. Osman Sankoh said that Stats SL now has a strong governance structure to be proud of with a new Deputy Statistician General and very qualified Directors that are performance driven. He intimated the team that when he took over, there was need to not only right-size the institution, but to also gain credibility by employing qualified staff.

He said, he recommended the creation of new divisions namely: Communications and Public Relations, Operations, National Statistical System and Internal Audit which he said is critical in ensuring internal controls and compliance to processes, procedures and policies.

He told the UNFPA Country Rep that Stats SL is blessed to be keenly supported by Government, adding that the Government through the Ministry of Finance has paid all the allocated budget for 2019, which is an indication that the Government realises the importance of Stats SL.

Prof. Sankoh informed the UNFPA team that as the Central Statistics Office charged by law to coordinate, collect, compile, analyse, accredit and disseminate high quality and objective official Statistics, one major challenge as is the case with almost all over the world, is the upsurge in the proliferation of open data, especially when  a plethora of institutions and research organisations produce data and then feel that they are as well competent, which sometimes challenges the position of the Central Statistics Office.

Concerning the accreditation of all official Statistics Produced within Sierra Leone, he informed the UNFPA team that this will be discussed at the 51st session of the UN Statistical Commission in New York, where Sierra Leone will start sitting as one of only 8 African countries, starting March 2020, for the next four years. He also made it known  that the parliamentary sub-committee on finance had  also backed STATS SL to have a legislation that will coerce every research institution in the country to get accreditation from Stats SL for every research work done. He said that Stats SL is in the process of starting the legislative process.

On using technology solutions in data collection, Prof Sankoh said that recent surveys like the Multiple Indicator Cluster Survey, the Sierra Leone Integrated Household Survey and the recent Demographic and Health Survey were all done using Computer Assisted Personal Interview (CAPI), which is a tablet based data collection. He furthered that the proposed Midterm Census to be undertaken in December 2020 will be with the use of tablets which will be a first in Sierra Leone.

He concluded by assuring the Country Representative that Stats SL is a credible partner that will do all it takes to ensure that the institution delivers on its promise of Credible Data to the populace of Sierra Leone.

In her response, the Country Representative of UNFPA, Dr Kim Eva Dickson, expressed delight at the warm reception accorded her and her team whilst commending the Stats SL team for the incredible facelift that has been given to the Stats SL headquarters, which she said was a far cry from when last visited. She expressed regret that she is only coming to visit now since Prof Sankoh(Mallam O) took over as SG, but is more than happy to meet the new management team. She said she had no doubts when she first heard that Prof Sankoh was the new SG as she had heard commendations and trust for Prof Sankoh since her days as a house officer.

She said another purpose of the visit was to renew UNFPA’s implementing Partner (IP) agreement with Stats SL and present a few office items to management. She expressed UNFPA’s commitment to supporting the Midterm Census, especially because it is of national interest and registered UNFPA’s continued desire to supporting Stats SL.

In few words, the Deputy Statistician General, Andrew Bob Johnny, told the UNFPA Country Rep that he is particularly pleased with the unflinching support that UNFPA has provided over the years to Stats SL through representatives that have come and gone.