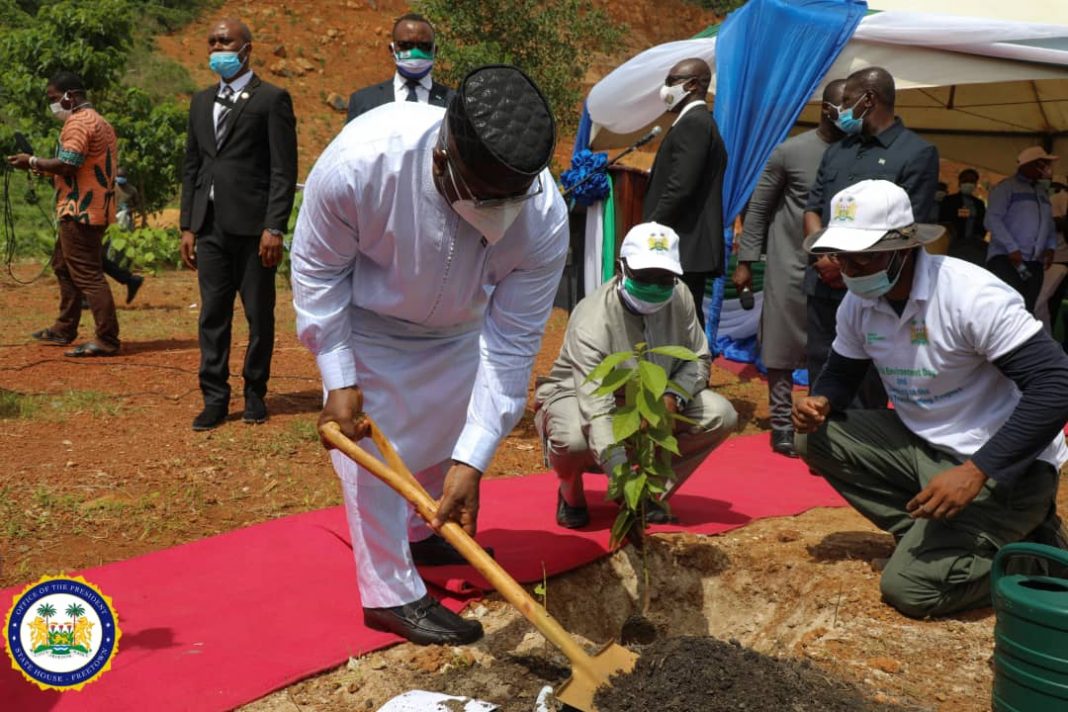 At Mortomeh, Regent Village in the Western Rural District ,where World Environment Day was observed on the 5th June 2020, President Julius Maada Bio, after delivering a comprehensive address, kick-started a national tree planting exercise and also launched the National Tree Planting Project within the context of mitigating the impact of climate change and fulfilling the Government’s commitment in the country’s Medium-Term National Development Plan.

“The co-benefits from health, agriculture, employment, water conservation, to economic development, are too numerous to name in this brief statement. It will initially target 10,000 youths comprising at least 50 percent women,” he said

President Bio further revealed that the National Reforestation and Afforestation Project, which was included in the 2020 budget, would benefit the whole country, adding that it would be pursued along with Government’s commitment to creating jobs in rural communities.

“This project is critical for various reasons: It will increase forest cover, enhance the capacity of carbon sequestration and biodiversity, and help reduce the adverse impact of climate change on the country; it will prevent the displacement of populations caused by flooding, as the trees will curtail water from heavy downpours; it will reduce early and erratic rainfall patterns leading reduced flooding and windthrow hazards.

“The national tree planting exercise will provide other ecosystems support functions such as water conservation; it will help to combat soil erosion along hills and slopes and aid soil conservation in agricultural areas; and finally the project will contribute to addressing several UN SDGs, the AU Agenda 2063, and Cluster 7 of our country’s Medium-Term National Development Plan,” he said.

The President recalled that in his inaugural speech to Parliament in 2018, he stated that Sierra Leone was ranked the 3rd most vulnerable country to climate change in the world or the 3rd country in the world with the least capacity to respond or adapt to environmental change. He, therefore, reiterated his campaign pledge to focus on the protection of the environment and the prevention of natural disasters in the country.

“We have taken proactive measures toward effective environmental governance, ecosystem conservation, the management of forest resources, and environmental education. We have established a stand-alone Ministry of the Environment and we are passing progressive legislation and policies to mitigate and manage environmental risks,” he said.

He also called for transparent and accountable national spread during the implementation of the programme and instructed the Minister of Environment to ensure that they strictly adhered to that.

“No one organization should apply for segments of this project in more than 2 chiefdoms of the same district; no one organization should be awarded contracts to provide or plant more than 10,000 seedlings; CBOs/NGOs should only be awarded contracts for areas in which they have worked before or have personnel who have abundant knowledge of the local area; only persons ordinarily resident in their respective chiefdoms shall be employed for the tree planting activity,” he warned.

Chief Minister, Professor David John Francis, who chaired the event described it as the symbolic start of the national tree planting exercise and also welcomed the guests as they commemorated the United Nations World Environmental Day to encourage global awareness and global action for the protection of the environment. He said that by the launch of the tree planting project, President Bio had answered to the UN Global call to protect the environment.

Country Representative for the United Nations Development Programme, UNDP, Samuel Doe, said that it was auspicious that Sierra Leone was marking the launch of the tree planting and afforestation project. He noted that the UNDP was standing with the Government of Sierra Leone to ensure the planting of trees to regenerate the planet and the environment in Sierra Leone, adding that humans were obligated to sustain the environment.

Executive Chairman for Environment Protection Agency, Dr Bondi Gevao, said that the ongoing climate-related impacts were reminders of the need to take responsibility to preserve their forests and wildlife habitats. He added that trees and forests play an essential role in mitigating the impacts of climate change and assured of his agency’s commitment to operationalizing the vision of the Government’s agenda on protecting the environment.