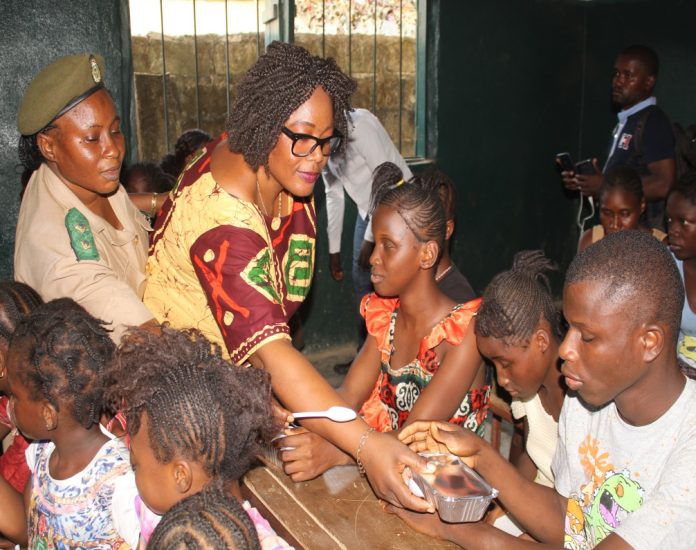 In her quest to celebrating a modest birthday, the Resident Magistrate, Court No:2 in Bo, Magistrate Isata Sellu Tucker has on recently dined with children at the St Paul School for the Blind and Physically Challenged Persons at the Sir Milton Margai Cheshire Home in Bo.

Making a statement, Magistrate Isata Sellu Tucker said she chose to celebrate her birthday with these children in order to rekindle the message of Hope.

Commenting on reasons for the donation of food and learning materials, Magistrate Isata Sellu Tucker opined that the learning materials including bags, books, pens, is a way of complementing Government’s efforts in the promotion of Free Quality Education in the country. She further promised to provide two bags of rice and five gallons of vegetable oil for children at the St Paul School for the Blind.

Principal, St Paul School for the Blind, Mr. Conteh showered profuse thanks on Magistrate Tucker for her kind consideration adding that for the past months they are battling with lack of food which he said is causing lots of inconveniences for the children and management.

Principal Conteh also craved the indulgence of the Magistrate to help protect the dignity of blind girls whom according to him are often abused and impregnated by those he described as being foolish.

He begged government through the officials present to relay their cries of food shortage to Government and Humanitarians.

Head Boy, St Paul School for the Blind, Alpha Bob Katta on behalf of inmates thanked Magistrate Tucker noting that in the history of their school, she is recorded as the First Magistrate in Bo City to accord them such a motherly Love. She prayed for God to replenish her needs and to further consider them in light of their plights and special needs.

Similar gesture was done to Children at the Sir Milton Margai Cheshire Home in Bo.

Financial Secretary for the Sir Milton Margai Cheshire Home, Prince Momoh said they are grateful to the Magistrate for her show of magnanimity adding that in the midst of their disability, nothing can limit them. He also disclosed the issue of government’s support which he said is not forthcoming since they reopened.

Among the donated items include, School bags, books, pens, sanitary pads to name but a few