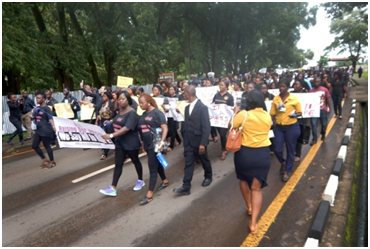 Human Rights are very topical issues at the International and National levels. They are rarely out of the news and have come a long way to becoming what they truly are today. Despite the endless impediments attributed to them, suffice it to note here that States across the world have doubled their efforts in putting primacy on their four main human rights obligations which are to respect, promote, protect and fulfill the fundamental and inherent rights of the citizens within their jurisdictions, and Sierra Leone forms a major part of those countries.

This work aims at discussing the right to freedom of Assembly and Association including its limitations/restrictions in the context of Act No.6 of the 1991 Constitution of Sierra Leone and proffering recommendations for State actors and the general public. It is also extremely relevant to bring to the fore the International, Regional and Local Legal Frameworks of the subject under review.

Like many other countries across the world, Sierra Leone is a signatory to almost all major International Human Rights Instruments, which include: Regional Standards on Human Rights, Treaties, Conventions and Declarations etc. These Legal Frameworks ensure that Human Rights are upheld without distinction as to race, colour, creed, religion, sex, tribe, politics etc. For instance, the right to peaceful assembly and association is enshrined in Article 21 of the ICCPR which states: “The right of peaceful assembly shall be recognized. No restrictions may be placed on the exercise of such rights other than those imposed in conformity with the law and which are necessary in a democratic society in the interests of national security or public safety, public order, the protection of public health or morals or the protection of the rights and freedoms of others.”

Looking at the regional levels, Article 11 of the 1981 African Charter on Human and Peoples Rights (Banjul Charter), Sierra Leone is a signature to this Charter. According to this Charter: “Every individual shall have the right to assemble and associate freely with others. However, the exercise of this right shall be subject only to necessary restrictions provided for by law, in particular those enacted in the interest of national security, the safety, health, ethics and rights and freedoms of others.” Even though, the Right to Individual Petitions has not been recognized, yet, it is noteworthy here that Sierra Leone is also a party to the 1998 Protocol on the African Court on Human and Peoples’ Rights.

In Sierra Leone, Chapter (3) of Act No. 6 of the 1991 Constitution guarantees the Recognition and Protection of Fundamental Human Rights and Freedoms of the individual without distinction as to race, colour, creed, religion, political, sex, ethnicity, etc. Section 26 (1) of the (1991) Constitution protects the right of Freedom of Assembly and Association. It states as follows: “Except with his consent, no person shall be hindered in the enjoyment of his freedom of assembly and association, that is to say, his right to assemble freely and associate with other persons…..for the protection of his interest”

There is no denying the fact that the freedom to assemble and associate freely with others within the jurisdiction is one of the many inherent human rights that puts primacy on the dignity and respect of all citizens, but when it comes to exercising this right, we must always keep in mind that this right is not absolute: it has limitations.

Therefore, we can be deprived of this right under certain circumstances and would not be seen as or considered a contravention of this right-see Section 26 (2) paragraph (a-c) of Act No. 6 of the 1991 Constitution.

In more development, Section 17 (1-5) of No.46 of the Public Order Act of (1965) further provides the following limitations:

Section 17 (1): “Any person who intends to take part or takes part in organizing or holding any procession shall first notify the Commissioner of Police in writing of his intention to do so and any person who fails to give such notice as aforesaid shall be guilty of an offence”.

Section 17 (2): “The Commissioner of Police shall by order in writing address to such persons giving notice, disallow the holding of any procession or impose such conditions as he shall think fit on any procession where in his opinion the interests of defence, public order, public safety or public morality so require”.

Section 17 (3): “Any person who takes part in any procession which has been disallowed by the Commissioner of Police or fails to comply with any of the conditions imposed by him under the provisions of sub-section (2) shall be guilty of an offence”.

Section 17 (4): “Any person found guilty of an offence under this section shall be liable on conviction to a fine not exceeding two hundred Leones or to imprisonment for a period not exceeding six months or both”.

Section 17 (5): “This section shall not apply to processions of the following nature:

It is noteworthy here that the importance of the practice of the Rule of Law in any democracy is that it puts everyone on equal stead. Therefore, insofar as the State has its obligations to promote, respect, protect and fulfill the inherent rights of individuals, citizens also have the responsibility to obey the law at all times.

According to Mahatma Gandhi, “Non-violence is one of many ways citizens can register their message to the State, but if that action seems to be in contravention with the law, public safety, public order, public morality, freedoms of other people within the state, etc then it is but prudent not to carry it out! There must be other avenues such as dialogue which can be utilized as opposed to resorting to demonstrations/protests.”

Quite recently, across most parts of the country, we all saw the unlawful demonstrations that resulted in losing the lives of youths that were involved. In most cases, these demonstrations have a political undertone and sadly, they have been used as avenues for the commission of crimes such as Arson, Mutiny, Insurrections, etc which in turn impedes the proper functioning of the State.

With the aforementioned, the Right to Freedom of Assembly and Association is enshrined in many International Human Rights Instruments ranging from the Magna Carta, UDHR, ICCPR etc, and many other Regional Human Rights Documents, as well as Local Legal Frameworks which seek to promote the dignity of the individuals while cautiously regulating and guiding the behaviour of State actors.

However, it is important to reiterate here that the right is not absolute; therefore, it can be limited under lawful circumstances as stated in the Constitution. Unfortunately, bad politics, including other factors, has created contention between the State and its citizens, and these factors have claimed the lives of many people across Sierra Leone.

To address some of the challenges attributed to the Right to Freedom of Assembly and Association, the Rule of Law and Democracy, the following recommendations have been proffered to both State actors and the general public:

They should always put primacy on providing the enabling environment for the citizens to exercise their inherent rights such as the freedom to assemble and associate with others freely without unreasonable limitations.

There should be more public education on what the laws say about human rights including their limitations so that the citizens can better understand their positions and responsibilities within the State.

Denying citizens the right to assemble freely goes contrary to the Government’s obligations when it comes to respecting the Fundamental Human Rights of its citizens. Thus, the Police should avoid being in a position that curtails the rights of citizens.

Government through its actors (Police) should always look out for alternative mechanisms in reacting issues of civil disobedience and should put primacy on using professional and proportional means of responding to demonstrations whenever the need arises to exercise their fundamental and inherent human rights.

When exercising human rights, especially the right to Freedom of Assembly and Association, citizens should always ensure that they do so within the confines of the law, otherwise, their actions may be seen as being in contravention of the Constitution.

Citizens should always choose dialogue over demonstrations/protests for peace and harmony to thrive without any threats to the development of human dignity. But in cases where the only option is to protest, then they should ensure that an approval from the Inspector General of Police has been obtained.

People who intend to hold non-violent processions should always ensure that their actions are not used as means to commit other crimes which may impede public safety, public order, public health and public morality etc.

Citizens who intend to hold non-violent processions should refrain from ushering in political forces that have the proclivity to hinder the smooth running of the State. Hence, citizens have responsibilities as enshrined in Section 13 of the (1991) Constitution, and they should always ensure that the upholding and maintaining of public order, public safety, public health, and public morality are sacred.

Lastly, heads of political parties should leave hold of their political differences and embrace peace and restraint as opposed to hateful and inciting statements that have the propensity for a breach of national peace and cohesion.