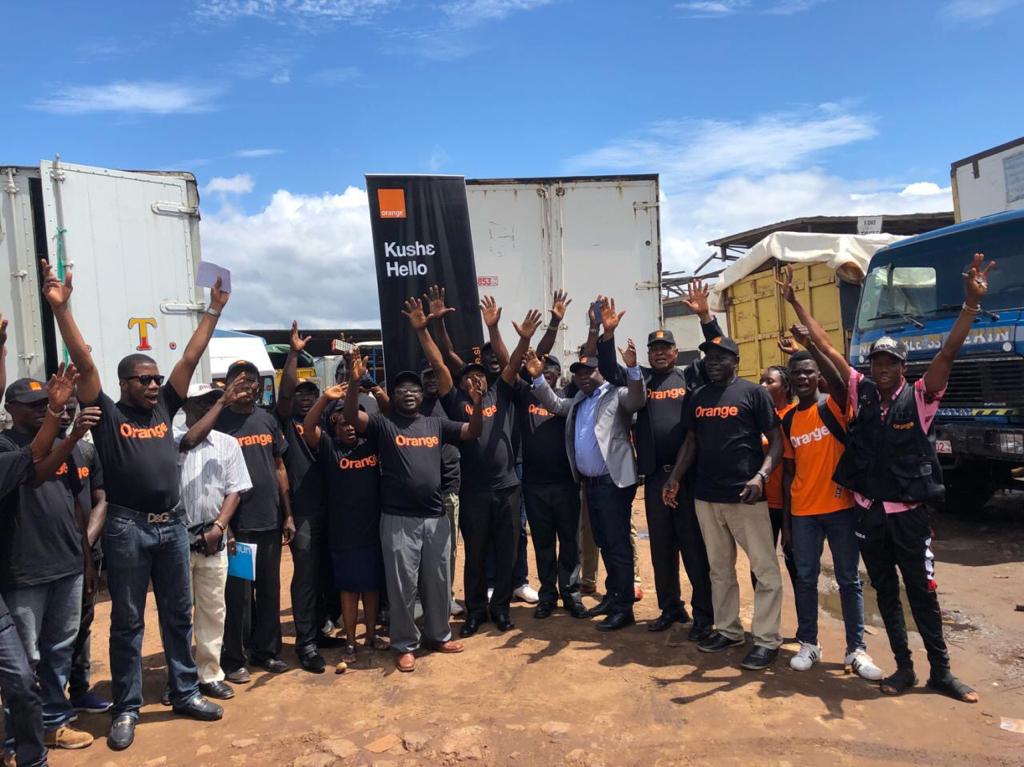 Orange-SL has on Monday 14th October 2019 sealed a partnership with the Sierra Leone Motor Drivers and General Transport Workers Association with the objective of discharging sim registration for all members of the Association in all motor parks first starting within the Freetown Municipality. The forming of the partnership took place at Texaco Lorry Park in the East End of Freetown.

He expressed thanks and appreciation for the concern shown by Orange Sierra Leone to countenance his union, citing that the visit of Orange SL staff to register his membership, will further strengthen the relationship between the Motor Drivers’ Union and Orange Sierra Leone.

The Drivers Union President told the Orange teams to access all the 37 Lorry Parks presently in Freetown to conduct the exercise.
Mr. Bah pointed out that as the Union’s President, he will not stand by and allow the membership to default and go the wrong way.
The security of the country, he indicated, is the most paramount and noted that the Sim Card registration will also have huge potential benefits for the membership of his union.

He also frowned at those who are in the habit of misusing and using GSM companies’ systems to threaten to kill others or engaged in fraudulent tricks, and that the current move to register sim cards in the country will put such activities out of the system.

Alpha Bah pleaded with Orange to facilitate their agents  to visit all their various parks and register the sim cards of their members sim cards.

Head of Compliance at Orange-Sierra Leone, Gerald Cole informed how some time ago, NATCOM asked all GSM operators to register their subscribers’ sim cards by taking vital bio information. He disclosed that they started off with registering drivers in 19 motor parks across Freetown.

Gerald added that the membership of the Sierra Leone Motor Drivers’ Union like everybody will need valid Identity Cards or Passports and drivers’ license to be able to register their sim cards.

This information, according to him, is critical for their data base and it would also aid affordable communication. The Compliance Manager also indicated that the exercise is also intended to enhance the digital revolution in Sierra Leone.

He further informed the Drivers’ Union that Orange-SL cares about the security of Sierra Leone and hence the reason for them to always collaborate with other vital sectors in strengthening security systems as well as robustly responding to mitigate security threats in the country.

He said the company is working tirelessly to help Sierra Leoneans benefit from the company’s unique products and services at affordable prices at all times.

The Secretary-General of the Sierra Leone Motor Drivers and General Transport Association, Kainnamu Kumabeh II, noted that in the wake of the partnership such will help the Association to register their members’ sim cards.

He also said they have informed their membership to register at the various stations across the country furthering how the registration is important to their association because through their cooperation it will reveal that the Executive body of the Motor Drivers is law abiding.

He reiterated that they have made it known that everybody should register his or her sim card with all the information to be entered into a data base system which will be used for different purposes. He said it will also help people to use their sim cards responsibly in order to enhance respect for law and the security of the State.

Kainnamu Kumabeh II also noted that Orange Sierra Leone is a better partner in the development of Sierra Leone.

He continued that the union has a President that cares for all, adding that with such a partnership they now have the hope that the union will benefit a lot during and after the Sim card registration exercise.
Orange Sierra Leone, according to him, has over the years worked very hard in helping the union in diverse ways and cited the printing of bill boards, calendars and other major assistance.