To support gender equality and the empowerment of women and girls in Sierra Leone Africell-SL on Tuesday 15th October, 2019 launched a partnership with the United Nations Women Sierra Leone at Bathurst Street Freetown.

In his address the Chief Corporate Officer of Africell SL, Joe Abass Bangura, stated that the signing of a Memorandum of Understanding with UN Women is a culmination of what both organizations have agreed upon to cooperate in promoting Gender Equality and Women Empowerment.

He disclosed that the Memorandum of Understanding (MoU) between Africell-SL and United Nation Women will cover 3 core areas of cooperation and they are:

Joe Abass further said that Africell-SL has five keys areas of intervention which include:

He added that UN Women will also be working with Africell to revamp the development and management of gender related policies.

“There is no argument that Africell is a leading sponsor of all things concerning women in the country from the signature program of our First Lady, Madam Fatima Bio – The Hands-Off our Girls Campaign to the Well Woman Clinic’s Annual Breast Cancer campaigns;  from the Annual Women Mean Business Awards to the Power Women 232 Annual Network Ball; from Rozzy’s education through entertainment project to Star Zee’s ‘Yes to Book n Pen Musical – and of course the recently concluded Miss Sierra Leone Beauty Pageant,” he maintained.

Joe noted that the entire world is in agreement with the need to end all forms of abuse and violence against women, adding that the world over society is doing more to create a better atmosphere that empowers women.

He said that Africell has been supporting all initiatives to get women and girls more involved in national development, more engaged in promoting social justice, economic growth, security and leveraging their unique talents, make them strong partners in unlocking and building potentials all across the country.

He added that women and girls make up more than half of the planet’s population further underscoring their commitment to women’s empowerment. He said almost 1/3 of their permanent staff at Africell are women and they will continue to work on increasing the number.

He applauded UN Women on behalf of the Management and Staff of Africell, for their continued strive for global gender equality and women’s empowerment.

She disclosed that His Excellency President Maada Bio is a HeforShe champion for UN Women and he has been inaugurated by UN Women for championing the rights of every Sierra Leonean but with more focus on women and girls mainly by using male engagements in championing such in the country.

She called on the media to support the campaign as the Fourth Estate is very critical in giving out the right information to the public in order to end violence against women and girls in the country.

In another development, the Chief Corporate Officer of Africell, Joe Abass Bangura and the Station Manager of Afri-Radio, John Konteh, were both inaugurated by UN Women as HeforShe campaigners 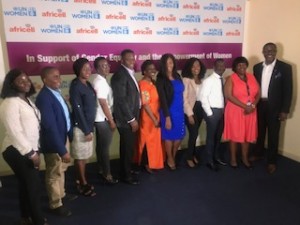 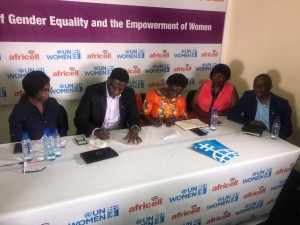