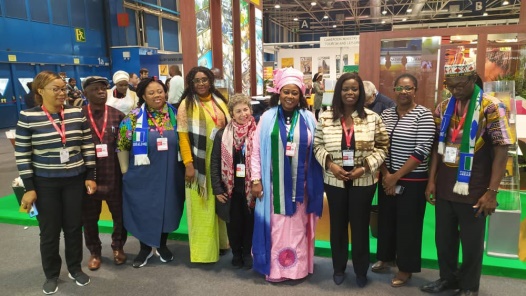 Sierra Leone’s Minister of Tourism and Cultural Affairs, Dr Memunatu Pratt who and entourage are currently in Madrid, Spain attending the 11th Tourism Investment and Business Forum for Africa at Fitur 2020. The country has the third largest booth at the fair.

Our indefatigable Tourism Minister is on record for her zest, dogged commitment and pro-active strides she has taken so far in and out of the country to transform the nation’s moribund but highly resourceful tourism sector by fully harnessing the potentials we are endowed with in order to derive appreciable amounts of revenue required by Government to roll out mapped out development programmes.

On Day Three of the Forum, Minister Pratt eloquently reasoned out with and made a passionate plea to her counterpart colleagues and other stakeholders present to see the need to collaboratively work in order to come up with a blueprint and chart the way forward for a smart and better approach to drive tourism for the development of their countries and regions.

Towards that goal she officially met with the Director of Tourism of the Cape Verde Tourism Board and the two held fruitful discussions on how they can partner and share methodologies to improve tourism that could pave the way for positive outcomes.

The Minister also visited the Ghanaian Booth where she met with officials of the Ghanaian tourism sector, held positive talks with them. She was able to learn a lot about what efforts and strides the Ghanaians have taken so far to make their country a prime tourist destination in Africa. There was the consensus that indeed through collaboration much could be achieved economically by the two sister countries.

Immediately after engaging the Ghanaians an invitation was extended to her by the Minister of Tourism of Mauritania, who after holding talks with him was also informed of the importance for the two countries to establish cultural and promotional exchanges.

Her presence at the Ethiopia Stand was brief but she successfully shared her vision of an enhanced African tourism sector through partnership and collaboration via shared ideas and pulling together of resources.

While discussions were ongoing on SITTA she had a warm shake hand with the Tourism Minister of Ivory Coast. During the discussions, the General Manager of the National Tourist Board, Fatmata Abe-Osagie, pointed out that she could not attend this year’s event in April on the grounds that it is during that month the country will be celebrating its Independence celebration and an important moment when tourism booms.

The Minister and team took random photographs at the Cameroon and Mali Booths where she warmly shook hands with officials from those countries and exchanged other courtesies.

Russian and Egyptian tour operators showed keen interest in Sierra Leone’s tourism and provided tips of what they want to achieve from every engagement with Sierra Leone come May or June this year.

In all the aforementioned engagements the Chairman of the National Tourist Board,Tamba Alieu Kokobaye, who was part of the delegation gave professional guidelines as the team moved from booth to booth. The Administrative Manager of Tourist Board, Annmarie Kamara, also gave highlights of the country’s cultural heritage, monuments and other historical sites.

In a related development on the sidelines of Fitur 2020, the Minister and entourage attended the XI Tourism Investment  and Business Forum for Africa (INVESTOUR) hosted by Ifema, United Nations World Tourism Organization and Casa Africa
She engaged her colleagues in a round table discussion on the topic “Creative Industries and Rural Tourism Development: An African Perspective” and sharing Sierra Leone’s institutional strides on preserving cultural heritage and rural tourism development.

It is plausible that Africa can make over 80 million tourists and this can be achieved only through sustained collaborations and increase over the 5 continental previous percentage.

Tourism is a dynamic sector in achieving the AU Agenda 2063 and the global SDG which require government policies across the continent to upscale in this direction. 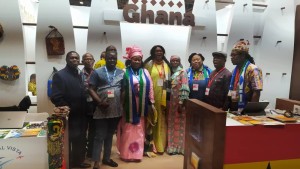