After what it described as having keenly watched his strides towards nation building and his good inter personal rapport with others, an organization which was established by some Sierra Leoneans residing abroad, Diaspora Focus,  on 21 January 2020 presented an award to the Statistician-General of Stats SL, Prof Osman Sankoh (Mallam O). The citation accompanying the award reads: For Estimable Contribution to National Development.

Presenting the award to the Statistician General of Sierra Leone on behalf of the International Committee Board of Diaspora Focus, The Director of Diaspora Focus, Dr Emmanuel Stafford, described the Diaspora Focus award as Priceless and certainly one of the most credible for service to humanity, community and nation building.

According to him it is the 7th edition of the Diaspora Focus award, the first of which he disclosed was hosted by now First Lady of Sierra Leone, Fatima Jabbie Bio in London back in 2012. Being that the Statistician General was not present at the award ceremony in December last year, he decided to present the award to him now on behalf of the International Committee Board.

Responding to receiving the award, Prof Sankoh expressed delight and honour for the award. He said that he had applied for the Statistician-General role whilst he was outside of Sierra Leone and that the advert had being sent to him by his daughter .He continued that this was because his daughter knew that he had always talked about returning back to Sierra Leone to serve, having spent 10 years as CEO of The International Network for the Demographic Evaluation of Populations and their Health (INDEPTH) which is a network that operates in over 20 countries around the world with its headquarters in Ghana.

He said that though he had lots of friends back home at the time he had applied, he didn’t call to make any follow up on his application as he believed and wanted the process to be fair. He said he spent three nights researching and reading for the interview and after he was eventually offered the job, a newspaper publication came out expressing doubts and indicating that he might not come because according to the paper, he was earning a huge amount at INDEPTH and therefore there were doubts as to whether he would come.

He said that as a result of those rumours and to demonstrate that  his coming was not predicated on money, he decided to fly back home in February of 2018 just to dispel the rumours and let his employers know that he was still interested and ready to serve his country, before eventually taking up office in April of 2018. He went on to say that money is not all that matters but sometimes people take up some jobs so that they can contribute and touch people’s lives just as he had done. He dedicated the award to the entire Stats SL Management team and staff whom he said believed in his vision for doing the right things for the transformation of the institution

He added that though Sierra Leone is a low income country and one of the least developed in the world, that does not prevent someone who leads a national institution to do the right things and then  show off a little bit with the changes you make which encapsulates his concept of “ Bongology” .

This award is the second major award since Prof Sankoh returned back home. The first was by the African Consulting Group, which was the National Leadership Award 2018/2019 for Outstanding Public Leadership which added to his long array of awards. Whilst he was working outside Sierra Leone, he was awarded amongst others, The National Organisation of Sierra Leoneans in North America (NOSLINA) National Community Leadership Award 2007 for Superior and Distinguished Service in Building Community and Enhancing Interconnectedness among Sierra Leoneans throughout North America. 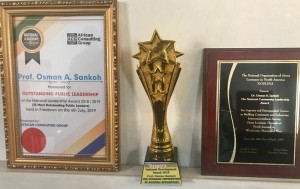