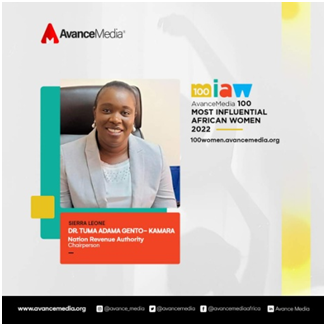 Mrs Tuma Adama Gento-Kamara, the Chairperson of the National Revenue Authority (NRA) has been named in this year’s Avance Media 100 Most Influential African Women.

Mrs Gento-Kamara was appointed by President Julius Maada Bio in July 2021. She was recently appointed as the Vice President of the Belt and Road Tax Administration Corporation Mechanism (BRITACOM), the world’s largest Tax Administration Mechanism. Also, she is an avid entrepreneur, a strong advocate for human and economic rights, and a very passionate community development champion.

The Belt and Road Tax Administration Corporation Mechanism (BRITACOM) has re-elected Dr. Tuma Adama Gento- Kamara as Vice Chair of the BRITACOM for the next two years was made possible by representations from over 100 countries, various tax administrations and finance departments from over (160) tax jurisdictions along with (350) delegates, over fifty (50) international organizations and a number of academic institutions.

Mrs Gento- Kamara who represents Sierra Leone was elected along countries like the United Arab Emirates (UAE), Georgia and Uruguay. The re-election was a key highlight of the second Belt and Road Tax Administration Conference which kicked off on the 7th September 2021. The second BRITACOF is themed, “Digitalization of Tax Administration”.

During that event,  Mrs. Gento- Kamara said the theme is a very important leap for the future of taxation among BRITACOM Countries around the world. She especially singled out countries in Africa where the tax administration digitization revolution has just begun and says she looks forward to harnessing the potential of digitalization in Africa.

The “BRITACOM” is a non-profit official mechanism for tax administration corporation and promises to build the most broadly represented tax collaboration mechanisms for member countries, committing to tax administration cooperation service, tax dispute resolution and tax administration capacity building with the aim of promoting and sharing of experiences as well as best practices all geared towards building a community of shared future.

The conference also focused on supporting and reinforcing prevailing international standards such as the OECD and the UN model tax conventions on income and capital, the OECD transfer guidelines, the UN transfer pricing manual etc.

It must be noted that the indefatigable Chairperson of the Board of Directors of the NRA, Tuma Adama Gento-Kamara was the proud recipient of an African Excellence in Public Office Award presented to her by the Coalition of Women in Africa for Peace and Development  at the Marriot Hotel during the 3rd edition of the African Women Summit held from 12th to 14th May 2022 in Kigali, Rwanda (the Land of a Thousand Hills). The award was in appreciation for her in the area of women empowerment and her sterling as well as tremendous positive and selfless contributions made by her so far in public affairs.

Besides, she has bagged other local as well as international awards for her selfless services to humanity and in public life.

The other public personality that was named in this year’s Avance Media 100 Most Influential African Women was the Mayor of the Freetown City Council, Yvonne Aki Sawyerr. Yvonne is the first female Mayor of Freetown in decades. She was elected into office in 2018, 25 years after working in the public and private sectors.

As the Mayor of a city with more than one million population, she has launched a three-year multi-pronged development plan called the “Transform Freetown initiative.” This initiative is covering the cleaning of Freetown’s streets, fixing drainage systems, planting a million trees, and implementing property tax reform.

It must be noted at this juncture that the annual publication presents a summary of African women who have climbed the corporate ladder, started their own businesses, or have been at the forefront of decision-making locally and globally.

This year’s list featured personalities like Presidents, Diplomats, CEOs, Scholars, Politicians, and Philanthropists. The publication presents a key opportunity for these women to be inspired and also continue in their strides of setting global standards and records. 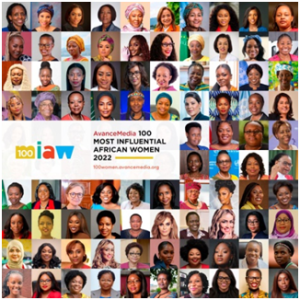 Is Govt. Justified To Go After Street Traders Without Providing Markets For Them?