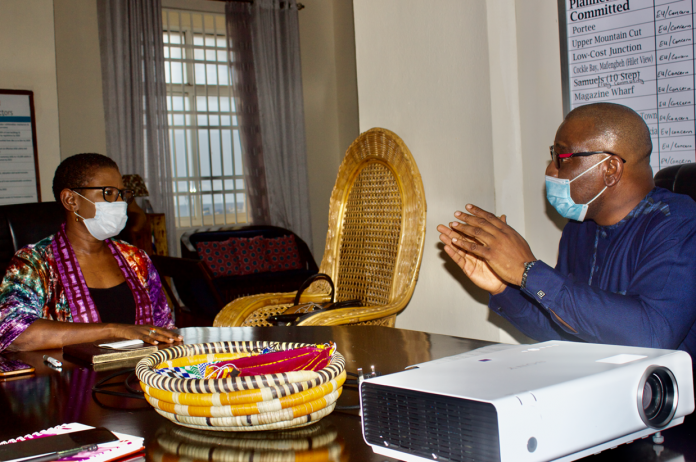 The New MD/CEO UBA Sierra Leone, Usman Isiaka, on Friday 2nd October met with the Mayor of Freetown, Yvonne Aki Sawyer, at the Mayor’s Parlour on Wallace Johnson Street in Freetown. The meeting has created a renewed business partnership between the Bank and the Freetown City Council (FCC) in the area of property tax collection among others.

It was learned from the meeting that Freetown has over 97,000 Domestic Property with over 1 million people and the Mayor has called on the Bank to become  one of the Council’s payment channels for property tax collection and also committed to working with the Bank in the Council’s digital property rate revenue generation drive.

Freetown City Council has the mandate to collect local tax, award small business license, property tax and enforce by-laws within the Freetown municipality.  The Council is the municipal Government of the city of Freetown, the capital of Sierra Leone. FCC was established in 1893 and is one of the oldest municipal Governments in Africa.

During the meeting, the MD/CEO briefed the Mayor about UBA’s business vision and mission and the Bank’s strong presence across Africa, America and Europe partnering with various Governments on infrastructural development projects and corporate social responsibility initiatives.

Mr. Isiaka informed the Mayor about the Bank’ supports to both past and current Governments during emergencies and natural disasters. He disclosed that in 2017 during the Mudslide, the Bank donated $500,000 for rescue missions and victims of the mudslide. The Bank’s Chairman, Tony Elumelu, made a donation of USD$250,000 on behalf of the Tony Elumelu Foundation and another USD$250,000 on behalf of UBA Foundation, the Corporate Social Responsibility arm of UBA Group.

He added that the Bank provided Le 30,000,000 (Thirty Million Leones) financial support to the Office of the First Lady for the launch of Hands Off Our Girls Project, a campaign that promotes education on sexual reproductive health and rights and the fight against rape in the country.

The MD/CEO further revealed that as of recent, United Bank for Africa made a donation of One Billion, Four Hundred and Forty Million Leones an equivalent of $150,000 to the Government of Sierra Leone for the fight against COVID-19 as part of the UBA’s Foundation $14million direct relief support to the Governments of all 20 UBA presence countries in Africa for the war against the pandemic.

Mr Isiaka ended by disclosing the Bank’s support to the Freetown City Council with over 1000 branded Aprons for the Council’s cleaning exercise.  He also used the meeting to finalize discussions with the Mayor on the Bank’s support to the Council’s Beautification Project with UBA Garden in front of the 11 Storey City Hall Building of the Freetown City Council.

The Mayor of Freetown was pleased to welcome the MD/CEO and pledged her Council’s Support to the Bank. She requested for the Bank’s participation in the ongoing MOBTAX digital tax revenue collections initiative of the Council.

The meeting was concluded with a conducted tour of the iconic FCC City Hall Building where the Bank will construct the UBA Garden. The MD/CEO was accompanied by the Head, Marketing and Corporate Communications, Sallieu Sesay, Brand Management Officer, Esther Emeh and the Acting Head, Public Sector Group (PSG) Victoria Banyan.