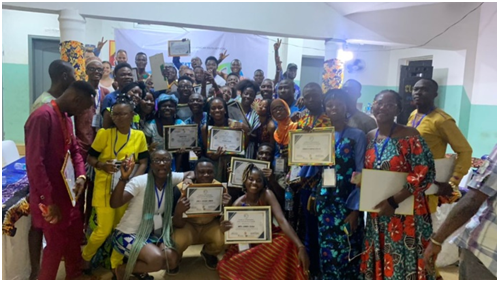 In their direct response to the significance of young people in fostering peace during and after elections in the country, the West African Youth Network, in partnership with various Students’ Union Government and with support from Bistum Regensburg in Germany has on Friday 10th June, 2022 concluded the 4 day University Peace Summit 2022 on the theme: “Students Shaping Peace Together, Conflict Mitigation, Mediation and Negotiation”. The University Peace Summit was held on Fourah Bay College Campus in Freetown.

Speaking to this medium in an interview, the Project Officer at the West African Youth Network, Edwin Nyamoh, said that the summit was geared towards addressing the role of students in the fight for peace and further equip them on strategic peace models through a diverse learning process aimed primarily at creating a safe space for students within and outside the education sector in the country.

He added that it also served as a direct response to the significance of young people in fostering peace during and after elections.

Edwin Nyamoh pointed out that the Summit has bridged the gaps between students from different learning institutions, thus fostering a collective approach to addressing the issues of violence, conflict, and peace building mechanisms and that it gave participants the opportunity to speak with a unified voice and create a platform for networking and productivity.

He concluded by encouraging participants to ensure that they replicate what they have learnt during the summit as a collective approach to addressing the issues of violence, conflict, and peace building mechanisms within and outside their various institutions.

The Head of Volunteer at the West African Youth Network, Fatmata Alie revealed that over the years the rapid spate of violence and insecurity have remained primary concerns more so amongst young people.  She said quite recently there have been reports of more than two violent outbreaks in three different universities in the country.

She continued that the summit has equipped them as students to serve as peace agents in their various universities and communities, as they learnt about means leading to peace, mitigation of conflicts and peace.

Fatmata Alie also urged participants to be peace ambassadors in their universities, communities more especially as the country will be conducting its general elections in 2023.

One of the beneficiaries of the summit, Chernor Bakarr of the Ernest Bai Koroma University, commended the West African Youth Network for organizing the summit which he described as not only important but a very timely intervention towards enhancing peace not only in their universities but the country as a whole.

He said that with the wealth of knowledge gained during the summit he is very equipped towards addressing the issues of violence, conflict and how to apply peace building mechanisms.

Chernor Bakarr assured all that he will ensure that what he has learnt during the summit will replicated accordingly.

She maintained that with this knowledge she will work with other students or youth groups towards achieving the purpose of the summit.

The event was climaxed with a certification ceremony as all the participants from the various universities were certified as Peace Ambassadors.