At a press conference held in Freetown on 13 May, 2019, a statement issued to journalists by Gabriel Madiye, Executive Director, Shepherds Hospice Sierra Leone (NGO)  indicated that state securities and agencies are being informed about the unfolding human rights violations in a part of the Republic of Sierra Leone that is called Timdale Chiefdom, Moyamba District.

The attack which started at 2:30 am on Monday 6th May, 2019 on innocent citizens was reported to have been ordered by PC Joseph Stevens Sologni, who won a rather cloudy election in 2015. Since his election, opponents had lodged an election petition in the High Court of Sierra Leone. This case is now reaching conclusion, causing some state of paranoia for the Paramount Chief. He is now using violence to subdue people he considers to be his opponents. Sadly, he does this evil with the support of the Member of Parliament, Hon. Mustapha Musa Sellu of Constituency 095, Moyamba District. Hon. Mustapha Musa Sellu, is no stranger to violence. He uses violent youths to fight, wound and destroy property of his own constituents, because he wants to coerce obedience.

In 2018, part of his constituency 095 (Bagruwa Chiefdom) suffered violence that witnessed destruction of property and injuries to citizens. This violence forced the paramount Chief, PC Robert Coker Selelo Papapwe to flee his Chiefdom.

Now this is the turn of Timdale Chiefdom to suffer organized violence, where he is working with the Paramount Chief to rule through violent youths.  The organized violence has enjoyed protection from the AIG South, Mr. Saidu Kamara whose strategy of policing and investigation of the report violence in Timdale has turned the victims into perpetrators; holding wounded persons in police cells without access to medical care. All attempts by relatives of the injured person to persuade AIG South, to grant access to medical care have failed.  Shepherds Hospice has projects in the Timdale Chiefdom and promoting health development in the community. We stand with the vulnerable citizens who are suffering this extreme violation of human rights who are served through our health and development projects. In this regard, we call on the Inspector General of Police to release the wounded suspects for medical care and transfer the investigation into more competent hands under a special crime syndicate that is capable to investigate this crime without the undue interference by Hon. Sellu and PC Solongi, who is allegedly editing suspect’ statements in all police stations in Moyamba and Bo.

Another letter of complaint sent to the Inspector General of Police, copied to the Minister of Local Government and the Minister of Internal Affairs; titled: Report of Violent Attack on a Training Workshop in Bomotoke Town by Chiefdom Speaker Jusu Mansaray and Others on Sunday 5th May 2019 states:

I write to report Chief Jusu Mansaray and fifteen (15) others who violently attacked a training workshop that was organized by our NGO Shepherds Hospice. The objective of this training was to introduce farmers to improved farming technology in the multiplication of Plantain and Banana Crops. The workshop was held in the Charles Yimbo Secondary School, Bomotoke town, attended by 60 participants selected from all sections of the Timidale Chiefdom. The notices for the training were sent to our focal persons who contacted all Section Chiefs to identify and send interested farmers. It was this workshop that Chief Jusu Mansary led youths to attack violently, alleging that they were acting on the orders of Paramount Chief Joseph Stevens Solongni.

Sir, it might interest you to know that Shepherds Hospice has worked as Non-Governmental Organization in the chiefdom since 2005, promoting health care and improving farming. It is in this cognizance that this training of farmers’ workshop was held. Sadly, a mob led by Chief Jusu Mansary, Dauda Sesay, Pastor Kelly, Morie Kamara, Samfa Mopala attacked participants of this training and assaulted some community members who were at the workshop site on Sunday 5th May 2019 between hours 10:30 am and 2:30 pm. In the fracas that ensued, two community members who attempted to question their actions to obstruct the training were assaulted very seriously. These victims are Mr. Saada Dem and Mr. Alpha Kaindor both of Bomotoke town. Because of the unfolding violence against the participants of the training we stopped the training and fled for our lives, returning to Freetown where our headquarters is located.

The following morning of Monday 6th May 2019, I got a call from a community member that the same mob continued their violence and looted a warehouse belonging to Mr. Saada Dem, burnt a neighbor’s house, and wounded other citizens.

On receipt of this report on the riot, I called the LUC in Moyamba on my phone to intimate him but was unsuccessful. However, against the background knowledge that I have with the attackers, they reported to me that they were acting on the instructions of P.C. Bobor Stevens Solongni of Timidale Chiefdom. It is sad though that this riot targeted property and lives of innocent citizens for destruction.

Sorry, Inspector General, sir, your good offices must stop Hon. Sellu from obstructing the course of criminal justice as it relates to the 6th May Timdale violence that left one house burnt, and at least seven people seriously wounded and property looted.

These rioters are common criminals who have nothing to offer but out to loot and steal cattle and wares of private investors and NGOs. I have been alerted that this group is planning an attack on our project property including a Community Health Centre in Mopala Village and a Cattle and Organic farm in Talaiye Village.

Please Sir, can the Police advise our agency on any pre-emptive measure the police can help with to protect our staff and property in the Timdale Chiefdom? At the moment, we are grateful to the LUC, CSP Khrushchev Kargbo, Moyamba Police division and the ONS for the prompt action taken to make police presence felt in the community on the 6th May 2019. However, just two police officers are not of enough strength to fight off countless rioters. Recognizing the danger now posed by this breakdown of law and order in this part of the republic, I request the Inspector General of Police to take necessary actions that protect life and property by sending reinforcement of security personnel so that the wounded can be evacuated without undue delay. Adequate strength of security can discourage further violent attacks on lives and property in the Chiefdom since this incidence is a symptom of a chronic condition of organized violence by some interests.

The release added that they recount that on Monday 31st December 2018, Shepherds Hospice reported a matter relating to rustling or theft of eight (8) cattle to Moyamba Police Station that were pregnant. Three (3) suspects were arrested and released on the request of PC Solongni. Sadly, the Moyamba Police are yet to return with any feedback on this matter since the receipt of an SMS message dated 10th February 2018 reading: ‘Mr. Gabriel your case and enquiry file has been sent to the principal state counsel South Bo for his perusal and legal advice. If we receive it we will inform you accordingly. Much respect Sir.

However, an earlier report to the Moyamba Police Station relating to an alleged arson on our Community Health Centre which left part of the building destroyed did not get any meaningful outcome. Because we have allowed crime to fester with impunity, citizens’ safety and security is now trampled upon by violent crime in the Timdale Chiefdom. This state of insecurity must not continue without the attention of the Inspector General of Sierra Leone Police. Against this background, I suggest that a special crime syndicate of the Sierra Leone Police force be assigned to assist the limited capacity of security personnel in Moyamba District. Again, we thank the Inspector General of Police for the show of strength which affected the arrest of twenty-eight (28) suspects, twenty-six (26) of whom are now held in Moyamba Town. 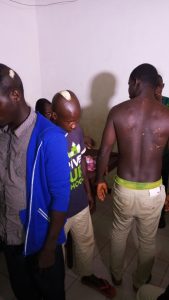 Following this expose, the Calabash newspaper reporters tried as best as possible to get a response from the other side without any success. However, we shall keep on trying.