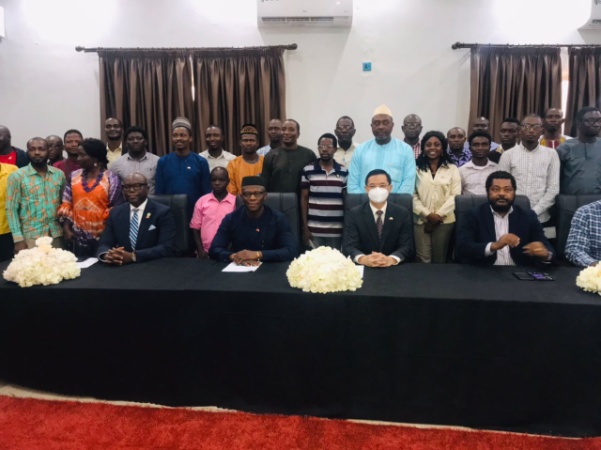 4The entity that regulates the media in Sierra Leone, the Independent Media Commission (IMC), with support from the Chinese Embassy in Sierra Leone, on the 18th May, 2022 conducted a one day professional ethics seminar for Station Managers and Newspaper Editors, at the Kona Lodge Hotel in Freetown, on the theme, “Interrogating Media Operations in Sierra Leone: Engaging the Media on Professional Ethics and Standards”.

Moderated by Dr. Victor S Suma, the Chairman of the IMC, Dr Victor Massaquoi, welcomed all the participants to what he referred to as a timely engagement. He informed that the IMC, in its bid to enhance professional development of media practitioners in the country decided to conduct a one day seminar.

He underscored that with the proliferation of Radio, TV and Newspapers and the overabundance of accusations of character assassinations levied at media practitioners in recent years, the need to conduct regular professional communication engagements and expose media practitioners to refresher knowledge is more critical today especially as the country approaches 2023 elections across the country.

The IMC Chair further pointed out that the professional seminar is designed to engage Radio and TV Station Managers as well as Newspaper Editors in the Western Area since Freetown has the largest concentration of media outfits in the country.

In his statement, the President of the Sierra Leone Association of Journalists (SLAJ) , Ahmed Sahid Nasralla,  extended gratitude to the Chinese Embassy in Sierra Leone for supporting the conduction of  the seminar. He maintained that ethics is to the journalist as profit is to the businessman furthering that some media practitioners have argued that journalism ,as a trade, hinges on Freedom of Expression underscoring how such should not be used as an excuse as there are rules or tenets to be uphold while practicing.

The SLAJ President stated how training programmes, targeting media practitioners, are very important because they serve as reminders of the dos and don’ts in journalism maintaining that such should be continuous. He intimated that though media practitioners have lost control over gate keeping, because of the emergence of the Social Media, however, it is not all that have access to cell phones.

He argued that media practitioners can only become professionals if and when they uphold ethical standards as such bring out certain values, of which honesty should be outstanding.

“Public accountability makes ethics very relevant,” he added furthering by admonishing practitioners not to misuse the right to Freedom of Expression to blackmail or distort facts.

Ahmed Sahid Nasralla mentioned mechanisms that SLAJ has put in place to checkmate excesses referencing the Disciplinary Committee , the Journalism Welfare Fund, which he said, was established to support independent journalists, investigative journalism and for media coverage during emergencies. He said modalities are now been put in place to operationalize the Fund in order for journalists to benefit.

The Sierra Leone Ambassador to the Peoples Republic of China, His Excellency Ernest Ndomaina, stated that he is very glad to commune with members of the Fourth Estate. He informed that the bi-lateral relationship between Sierra Leone and China is mutual maintaining that the two countries will stand together and be each other’s keeper.  The Ambassador talked about the need for the media to extol the mutual benefits both countries are enjoying as a result of the mutual relationship. He noted that China is on the verge of wiping out extreme poverty furthering how there are key ingredients that have led to such a leap stressing the need to learn from China.

In his keynote address, the Chinese Ambassador to Sierra Leone, His Excellency Hu Zhangliang, pointed out how the media shoulders important missions such as telling the truth, promoting public ethics and morality, building social consensus and upholding justice stressing that the media plays an important role in the political, economic and social development of all countries.

He said great achievements have been made in the information sector in Sierra Leone in recent years referencing the abolition of the Seditious Libel Law and the hosting of the first national media investment conference etc..

Pointing out that the Press Freedom Index for Sierra Leone has risen from 75th in the world to 46th ,he also informed that the number of national radio stations in Sierra Leone has increased from 139 in 2019 to 155 now.

The Ambassador maintained that the main features of China-Sierra Leone cooperation hinge on sincere friendship, visible outcome, no political conditions attached and credit-worthiness.

He furthered that the China-Sierra Leone relationship and cooperation is one  that is mutually beneficial in nature because China is also a developing country with similar historical background.

That China upholds the policy of sincerity, real results, amity and good faith, and pursuing the greater good and shared interests in its diplomacy towards developing countries as it believes that the world is one family and advocates building a community of a shared future for mankind.

Thirdly, that Sierra Leone has always shown understanding and support to China on issues related to China’s core interests and major concerns, especially with regard to China’s sovereignty, territorial integrity and dignity.

He demystified what he referred to as skewed and distorted reports about the exploitation of the country’s marine resources by the Chinese, with particular emphasis on the fishing sector and maltreatment of Sierra Leonean workers working on Chinese Fishing vessels. The Ambassador maintained that Chinese Fishing vessels operate according to the laws of Sierra Leone also underscoring that proceeds derived from fishing activities do benefit the country and are not only carted away as portrayed by some.

He concluded by reminding all that the value of the media lies in its integrity expressing the hope that media practitioners will continue to report on China and China-Sierra Leone cooperation in an objective, fair, friendly and professional manner, so that the exchanges and mutual understanding between the two sides will be further enhanced.

In his presentation on the topic, “The Private Sector and Contemporary Media Practice”, the Managing Director of the Rokel Commercial Bank, Dr Ekundayo Walton Gilpin, said the media is very important in boosting the private sector particularly with respect to improving returns on investments. He referred to the private sector as any entity whose activities are geared towards profit making and is not controlled by the State.

The Managing Director stated that it is vital for the private sector to have a good relationship with the media. He talked about the paradigm shift from the traditional media to one that has now gone fully digital. Stressing that media practitioners need to diversify their strategies, he said the main focus should now be on the internet as most customers now leverage social media platforms to know about news of products and services. He stated that the private sector will give adverts to media entities that have wider coverage and followers adding that contemporary media practice now lays more emphasis on upholding good ethics which the private sector players cherish and look forward to.

“Let’s work together to push the country forward and promote professionalism,” he enjoined all.

Dilating on “The Nexus between the Media, the Public and Civil Society”, Marcella Samba Sesay of the Campaign for Good Governance stated that the media is part of civil society. After making contextual clarifications, she maintained that one can hardly talk about good governance without mentioning the media and Civil Society. According to her, both can hold Governments accountable through ethical ways of asking questions and bringing grey areas to the fore.

On “Standard Reporting Guidelines for Journalists”, Commissioner James Tamba Lebbie of the IMC maintained that the law protects everyone adding that rights go with responsibilities. He underscored the need to report the news accurately and fairly adding that ethics entail honesty, integrity and good faith.

“Professional integrity is the cornerstone of a journalist’s credibility,” he stated furthering how ethics tell us what we should do and not what we should not do , which he said is the preserve of the law.

Highlighting some ethical lapses, the Commissioner mentioned inventing information, acceptance of payments by Editors from sources, publication of adverts in the guise of news items. He said when these lapses occur; journalists and news outlets suffer from criticisms.

The Commissioner said in upholding ethical principles, the journalist must not invent information, not put words in the mouths of others or pretend to be somewhere he or she has not been. He also said journalists must not plagiarize or fabricate.

He enjoined media practitioners to abide by the tenets of the Media Code of Ethics, the SPJ Code of Ethics, seek truth and report it, minimize harm, act independently and be accountable as well as transparent, correct errors.

Commissioner Tamba Lebbie stressed on the need of the right to reply which he referred to as a fairness doctrine maintaining that it is proper or good to hear from all sides and to adopt an ethical decision making process.

Climaxing the one day seminar was the question and answer session as well as the proffering of meaningful contributions.